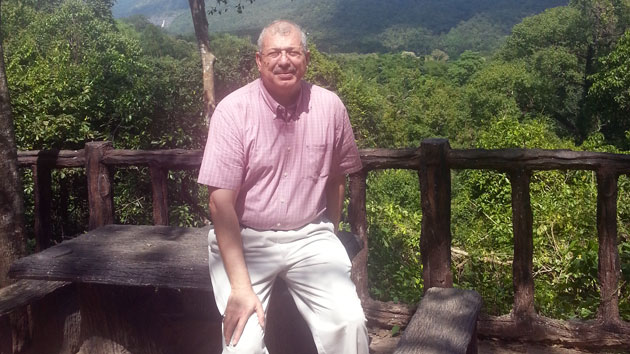 When two FBI agents called Nader el-Dajani in August 2012 and asked if he could meet at Starbucks for a chat, he instead invited them to his home in Fort Wayne, Indiana, for coffee and tea. The 55-year-old businessman, who lives in Bahrain for most of each year, hadn’t been charged with a crime, and the FBI agents never explained why they were interested in him. Dajani didn’t have to tell the agents anything. But he did. He explained that, a few months earlier, he’d been stopped and questioned by Department of Homeland Security officers at a London airport because he was carrying multiple cellphones, which he uses during his international travels. He readily answered the agents’ questions about his travels in the Middle East—where he owns several businesses—and his knowledge of the region. He thought it was the right thing to do. “I told them everything,” he says. “I was open.” He assumed that cooperating with the bureau would make his life easier.

He was wrong. Dajani, who is of Palestinian descent, has been an American citizen since the mid-1980s. He owns several businesses in Bahrain, where he spends much of his time. One of these businesses involves selling security equipment—including access controls and retinal scanners—to telecommunications companies. It requires a lot of face-to-face meetings, so he travels regularly around the region and the world. Until the incident in London, he hadn’t had any problems at the airport. The FBI agents said they’d try to fix his problems. But in the two years since they visited his house, he’s faced additional screening and questions every time he travels. Each time, he submitted to searches and answered questions.

Now Dajani’s livelihood is at stake. On February 27, when he went to get new pages added to his passport at the US Embassy in Bahrain, as he had done many times before, the government confiscated it. He says he was told that “guidance from Washington” required the Embassy to hold on to his passport. He never received an explanation for why it was taken. He missed his 30th wedding anniversary celebration and numerous business meetings. Without his passport, he will lose his legal status in Bahrain on April 17 and face deportation. And he’s had enough. “It’s a situation of livelihood,” he says. “My business could fall apart. I could lose everything that I’ve worked for if I’m not able to do the business trips I need to. People are going to start suspecting me, people are going to say, ‘Why should we work with you?—you’re suspicious.’ My whole life, my whole career could be jeopardized because I am not able to travel.”

It has been more than five weeks since the government confiscated his travel documents, and Dajani is still without his passport. A State Department official told Mother Jones Dajani’s “application is under review and we will be in touch with him shortly.” The FBI declined to comment.

Dajani has played by the rules. Last September, he used the Kafkaesque process known as the Traveler Redress Inquiry Program to formally ask the Department of Homeland Security to review whether he was on any terrorist watch lists and whether he was being screened appropriately. After submitting his personal information for use in this secret process, in which Americans are not able to contradict or even see any evidence against them (if it exists at all), Dajani received what is known as a redress letter. This document provides Americans who want to be removed from watch lists with a seven-digit Redress Control Number and the vague assurance that if any action was warranted, the government has taken it.

The redress number solved nothing. The US Embassy in Bahrain has told Dajani that it is still unable to return his passport, and the only option he has is to accept a two-day travel document that will only allow him to return to the United States—a decision that would cost him his legal residency in Bahrain. “If they want me to go to the States, if they have something against me, they should say that, and I’ll go to the States,” Dajani says. But the embassy hasn’t given him any indication that he’s suspected of any wrongdoing or that the government wants him back in the United States.

“He sat down and talked to the FBI and this is his reward.”

Federal law requires that US citizens be granted a hearing before their passports are revoked. “Having a passport is part of a citizen’s right to international travel, because without a passport you’re not able to move about or return to the US,” says Gadeir Abbas, a lawyer with the Council on American-Islamic Relations who is representing Dajani. “They can revoke it if they believe it has been obtained fraudulently. But here, there isn’t any allegation of wrongdoing, and because there isn’t an allegation of wrongdoing and there hasn’t been any notice, Nader is left without a passport unlawfully.” In January, the Washington Post reported on a recent spate of passport confiscations and revocations at the US Embassy in Sana’a, Yemen. The State Department told the Post that “the Department has authority to deny and revoke a U.S. passport under certain conditions, including those involving false identity.” Dajani has not been told that his identity is in question.

The Department of Homeland Security, the FBI, and the State Department have a long-standing practice of using passports, terrorist watch lists, and travel restrictions such as the no-fly list as leverage. Dozens of American Muslims have traveled abroad only to find, when they tried to return home, that they were on the no-fly list and could not return to the United States unless and until they answered questions from the FBI—often without a lawyer present. (This practice is the subject of Latif v. Holder, a pending lawsuit brought by the American Civil Liberties Union against the Obama administration.)

Dajani’s problems are part and parcel of this larger trend, Abbas says: “The FBI has made a practice of placing people in vulnerable situations in order to extract information from them. Here, for unknown reasons, the embassy is going to deprive an American citizen to remain where his business in and deprive him of the ability he’s had for decades to move about the world. It’s alarming that something like that can happen. He sat down and talked to the FBI and this is his reward.”

Here’s a letter Abbas sent to the State Department on Dajani’s behalf: