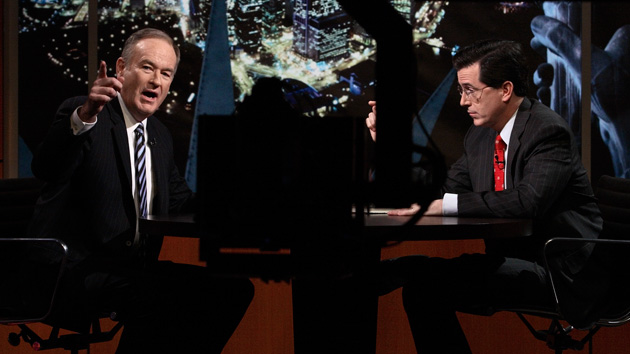 Jumping from his niche cable show on Comedy Central to a plum CBS slot will roughly triple Stephen Colbert’s national television audience. So when he takes over David Letterman’s late night show next year, we at Climate Desk be tracking one thing in particular with great interest: Will he bring his astute political satire about global warming to an even bigger audience?

None of the current late night barons—Kimmel, Fallon, Ferguson among them—are especially notable for speaking out about climate change, though they occasionally work it into the odd monologue or guest appearance. Colbert is different. In his role as right-wing Satirist-in-Chief, Colbert has regularly skewered climate deniers by pretending to be one of them. One of my favorites is this takedown of Fox and Friends (a frequent target of the show), whose hosts had accused Nickelodeon of pushing a sinister warmist agenda…via SpongeBob Square Pants:

And this year, he nailed Donald Trump:

But Colbert has not just mercilessly parodied the attacks on climate science, he has also delved into some of the more complex aspects of climate adaptation, including geoengineering. During an interview last year, Harvard University environmental scientist David Keith presented the case for pouring out sulfuric acid into the atmosphere to temporarily ameliorate the effects of warming. “It would be a totally imperfect technical fix,” Keith said. “It would have risks. It wouldn’t get us out of the long-run need to stop polluting. But it might actually save people and be useful.”

But perhaps his best—most sobering, most blistering, most poignant—take on the subject was during this segment from January 2013, where he lampooned an emerging trend of commentators throwing up their hands in faux despair, and resigning themselves to the fate of a warming world. (In this case, he’s going after Erick Erickson, who worked for CNN at the time):

COLBERT: Sure, I know: America beat Tojo, we crushed Hitler, we put a man on the moon, but incrementally reducing CO2 emissions? That sounds like a lot of work. And how can fight an enemy we can’t see? I mean, get out of here, get, get out of here, carbon! [Swats air]. Did I hit it? I don’t know. So it’s high-time we stop trying to solve the problem and resign ourselves to each day getting worse. Because ladies and gentlemen, when Erick Erickson says “get used to it”, he means get used to city-swallowing storms, mass extinctions, deadly heat waves, crippling floods, and droughts that make a desert out of Oklahoma. And, that’s just how it is now. Our problems are just too big to cure. So join me and Erick. Give up. Crawl into bed with a cheesecake and wait for death. And now, sure, the only thing worse than global warming itself might be knowing you’re destroying the planet, and doing nothing, but if guys like me and Erick have our way, you’d better get used to it.