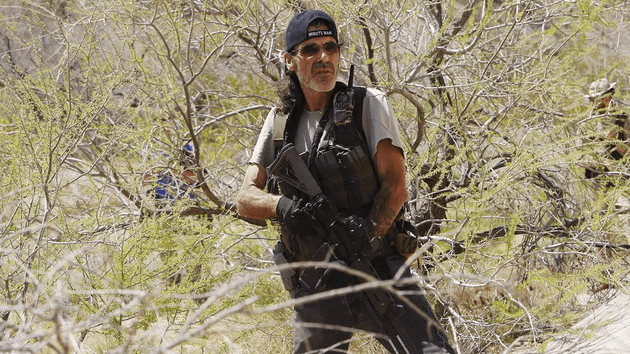 Conservative activists and media outlets have generally embraced the cause of Cliven Bundy, a Nevada cattle rancher who inspired a gang of protesters—many of them armed—to face off with federal law enforcement this weekend. But one figure on the right has taken a surprising stand against Bundy’s supporters: former Fox News host Glenn Beck.

On Saturday, a large group of anti-government protesters converged on a Bureau of Land Management base camp in rural Nevada to protest the federal government’s seizure of Bundy’s cows. Bundy had for years grazed hundreds of cattle on protected lands controlled by the federal government and refused to pay the resulting court-ordered fines. This month, after nearly 20 years of consistently beating Bundy in court, the BLM moved to confiscate his cattle. A judge ordered Bundy not to physically interfere. In response, Bundy assembled protesters to confront the BLM officers who were holding his livestock.

After a dramatic, two-day standoff, federal officers backed down and handed the cows over to Bundy to avoid violence. Astonishing photos from the scene show protesters perched on a highway overpass and hunkered down in the brush with long-range weapons; one photo appears to show a man on the bridge aiming down at the BLM base camp.

The involvement of armed militiamen—and Bundy’s promise to “do whatever it takes” to reclaim his cattle—doesn’t appear to phase conservative activists who have turned Bundy into a cause célèbre. Before this weekend’s confrontation, National Review Online, Fox & Friends, and American Thinker all blamed the government for mounting tensions. Two groups affiliated with Americans for Prosperity, a political organization funded primarily by the Koch brothers, spent the weekend tweeting their support for Bundy, Media Matters reported. Sean Hannity, who on Friday hailed Bundy as a capitalist hero—”When your cattle graze there, that keeps the price of meat down for every American consumer”—invited Bundy back on the air Monday for a second, easygoing interview in which he made only glancing reference to the armed confrontation.

Beck, though, in an episode of his show broadcast Monday, said he fully supports Bundy’s principles but couldn’t look past his supporters:

The problem here is that Bundy hasn’t been all that clear on this…He’s a rancher. And so he’s not used to making his sound bite case in this sound bite world. But the problem with that lack of clarity is some of the supporters that he’s attracting. He is drawing in the decent, small government proponents from groups such as the tea party…I know there’s some people that listen [to] and watch me. And they are sick of the government regulations hampering themselves, small businesses, farming, I’m with you on that.

But when you’re not really super clear, it also draws another element, drawing in the violent, anti-government groups. The, I think, right’s version of Occupy Wall Street. We did some research online on PsyID [a social-media analysis tool] today, and found that there’s about 10 to 15 percent of the people who are talking about this online that are truly frightening. They don’t care what the facts are—they just want a fight. And you see it in some of these pictures.

At this point, video played behind Beck of protesters scuffling with federal officers.

I don’t know who these people are. They all might be great. But here they are, they’re acting, they’re enraged, they’re enraged. And they’re confronting the federal government officials. I get that. But this is not the way to win…I want to be clear, 100 percent clean on one thing all of us should agree on, and unfortunately, I don’t believe we do, both left and right. And that is, we need to agree on, we condemn those who use violence. Inciting violence doesn’t solve anything. I vehemently denounce anyone who even hints at such tactics…People can spot anger and vengeance from a mile away. And when I saw that video where they were lunging and jumping at the agents, calling them scumbags, I thought, this is our side’s Occupy Wall Street. It’s happening all over again, and it will end the same way.

Beck didn’t specifically call out the armed protesters, and the Blaze, a website that is part of his media empire, played up the federal government’s role in bringing the crisis to a head. Beck claims the facts of the federal government’s actions against Bundy are “convoluted” (when they’re pretty well established) and equates heavily armed protesters with Occupy Wall Street. But there’s no doubt that he took a stand against the extreme elements among Bundy’s supporters. And when Glenn Beck approximates a reasonable position on the same night that a blood moon rises, you’ve got to second-guess the folks who say the world isn’t coming to an end.