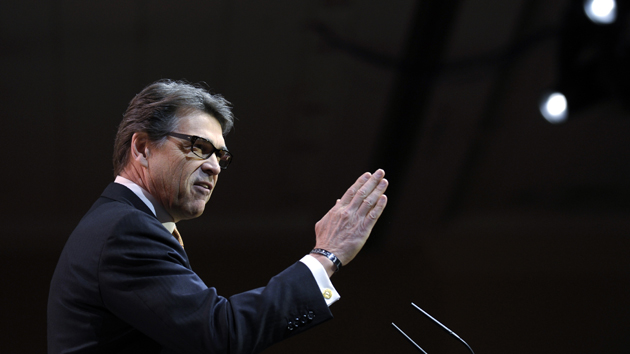 UPDATE 2, January 27, 2015: On Tuesday, a judge denied the former governor’s second request to dismiss the charges of abuse against him.

UPDATE, August 15, 2014: On Friday, Governor Perry was indicted by a Travis County grand jury on one felony count each of abuse of power and coercion of a public servant. Read the full indictment here.

Rick Perry—Republican Texas governor, failed 2012 presidential candidate, and potential 2016 retread contender—is battling legal trouble at home, thanks to his controversial veto that demolished the state office tasked with investigating political scandals. On Monday, a Texas judge convened a grand jury to probe Perry’s decision last year to ax funding for the state’s Public Integrity Unit. The special prosecutor investigating the case, Michael McCrum, has not filed any charges. But earlier this month he said, “I cannot elaborate on what exactly is concerning me, but I can tell you I am very concerned about certain aspects of what happened here.”

Perry’s troubles started when he attempted to to displace the government official in charge of the Public Integrity Unit, a state-funded watchdog agency that investigates charges of public corruption. The unit is led by whoever is serving as the Travis County district attorney, who is based in Austin. The current DA is Rosemary Lehmberg, a Democrat. Last April, she was arrested for drunk driving.

After Lehmberg’s arrest, Perry called for her resignation, claiming that the public could no longer place its trust in an official who herself ran afoul of the law. But the governor has no direct control over her job, a locally elected position, and a grand jury rejected a former opponent’s attempt to have Lehmberg removed from office. For her part, Lehmberg refused to resign, though she said she won’t run for reelection in 2016. That wasn’t enough for Perry. With Lehmberg holding on to her job, the governor decided to cut off the $7.5 million (over two years) in state funding for the watchdog unit with a line-item veto. “Despite the otherwise good work the Public Integrity Unit’s employees,” a Perry statement said after the veto, “I cannot in good conscience support continued State funding for an office with statewide jurisdiction at a time when the person charged with ultimate responsibility of that unit has lost the public’s confidence.”

Texas governors have wide discretion to veto legislation. But by publicly tying his veto of the unit’s funding to his effort to push Lehmberg from office, Perry may have run afoul of state rules that prohibit coercion or bribery of public officials. Texans for Public Justice, a liberal-leaning good government group, filed a complaint against Perry last June, and a special prosecutor was assigned to the case. “Threatening to take an official action against her office unless she voluntarily resigns is likely illegal,” Craig McDonald, director of TPJ, said in a statement. “The governor overstepped his authority by sticking his nose in Travis County’s business.” Perry has retained a defense lawyer and stands by his veto, with his lawyer claiming that the decision was within the law.

While Perry has framed his decision to deprive the Public Integrity Unit funds as solely related to Lehmberg’s drunk-driving incident, his veto might be due to other political concerns. As the Texas Tribune notes, “Dismantling the unit is a perennial platform plank of the Texas Republican Party.” The unit dates back to the 1980s and watches state politicians to make sure they don’t violate election and anti-corruption laws. One of the highest-profile investigations by the unit is the ongoing criminal case against former Rep. Tom DeLay, who has been accused of money laundering to hide corporate donations to state GOP candidates. “Given that most public officials in Texas are Republicans,” Texas Monthly‘s Dan Solomon writes, “that means that the unit frequently investigates Republican officeholders—and some say the fact that the people responsible for the unit are elected by voters in the Democratic stronghold of Austin makes it unpopular with Republicans.” If Perry had been successful in strong-arming Lehmberg out of the job, he would have been able to name her replacement to serve through the next election.

The Public Integrity Unit didn’t close shop after Perry cut off funding. The local county decided to fund a reduced operation for this year, but that still meant layoffs for two employees, reassignment or early retirement for 18 others, and strict limitations on taking new cases.