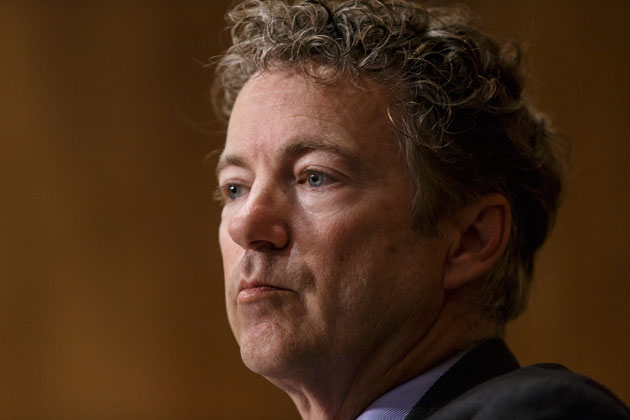 This past weekend—days after Mother Jones revealed video of Sen. Rand Paul (R-Ky.) claiming that Dick Cheney exploited 9/11 to start the Iraq War to boost profits for Halliburton, the military contractor where Cheney had been CEO—Paul claimed in interviews with ABC News and Business Insider that he had never questioned Cheney’s motives. He insisted he had merely noted that Cheney’s Halliburton ties had posed the “chance for a conflict of interest.” Paul was spinning—not acknowledging the actual comments. But when Paul was running for the US Senate in 2009 and 2010 as a tea party outsider who would take on Washington’s special-interest lobbyists, he repeatedly cited the Cheney-connected Halliburton as an example of what was wrong in the nation’s capital. In a videotaped talk on national-security policy, for example, Paul complained, “We give billion-dollar contracts to Halliburton, they turn around and spend millions on lobbyists to ask for more money from government. It’s an endless cycle of special-interest lobbyists.” At one campaign stop after another, Paul bashed Halliburton, and he boasted that he had a bold and imaginative plan for limiting the influence of big-money lobbyists and donors who funnel cash into the campaign coffers of candidates to win access and favors. But several years into his first term, Paul has yet to introduce this proposal—or say much, if anything, about it. In fact, he has been accepting contributions from the lobbyists he once so passionately decried.

On March 2, 2010, Paul appeared on CNN, and host Rick Sanchez asked him what he would do about the “unbelievable amounts of money that are being paid from certain industries into the campaign coffers of certain politicians…and how are you going to deal with that, if you get elected?” Without pausing, Paul confidently replied:

I think that I have a cure for it actually that will pass constitutional muster. What I would do is, on every federal contract, I would have a clause, and it says, if you accept this clause you voluntarily give up the right to lobby, you voluntarily give up the right to give PAC contributions. And I would have the top 20 officers sign it also individually, voluntarily give up their right to give [political] contributions…I’m talking about people who do business with the federal government. For example, we have big business that get billion-dollar no-bid contracts with the government. They take their first million dollars, and they buy a lobbyist. The lobbyist goes then and asks for more money. It’s a vicious cycle. So I would say if you want to do business with the federal government, what I would say is let’s have a clause in the contract, and it’s a voluntary clause, you don’t have to do business with the government, but if you do, then you give up certain things.

Paul’s critique was reminiscent of the position Sen. John McCain (R-Ariz.) advocated when he was a campaign finance reform firebrand years ago. McCain denounced the “iron triangle” of lobbyists, campaign contributions, and legislation. Paul, who has often slammed McCain for passing a campaign finance law imposing limits on what outside groups can do to affect federal elections, had devised his own way to break up this unseemly triangle.

His response to Sanchez’s question was nothing new for Paul. The previous year, he was interviewed by paleolibertarian Lew Rockwell (who was closely associated with Ron Paul newsletters that had published racist material), and he pitched the same proposal, while taking aim at Halliburton. In fact, Paul brought the topic up without prompting: “The one issue that I’m going to talk about [in my Senate campaign] that my father doesn’t talk about as much is that I think money corrupts politics.” And he cited the need to stop special interests, such as Halliburton, from dominating Washington:

I think it is particularly galling to a lot of people that you have, you have, like Halliburton has a billion-dollar contract but they immediately turn around and take a million dollars of that and pay a lobbyist who goes to Washington and says, ‘Please sir, can I have some more, sir?’ And the system goes on and on and is perpetuated and the policy driven by these lobbyists.

Paul frequently cited his reform plan on the campaign trail. He did so at a tea party “freedom rally” in the state capital and declared that promoting this idea was a way to appeal to independents and moderates “because it is about good government.” At a rally for his Senate campaign in Harlan, Kentucky, Paul, referring to the permanent Washington establishment, proclaimed, “Enough’s enough,” and hailed his proposal.

Once Rand Paul hit Washington, his plan—which would spell bad news for the Republican Party and conservative funders like the Koch brothers, whose Georgia Pacific has had federal contracts—disappeared. Paul has assailed the revolving door through which former members of the House and Senate pass and become lobbyists, and he has proposed legislation to force lawmakers who become lobbyists to give up retirement and health benefits. But there’s been not a peep from Paul about limiting the campaign contributions and lobbying efforts of corporations (like Halliburton) that receive federal contracts. He has not introduced legislation in this regard.

What happened to his grand idea to limit the influence of special-interest money and lobbying in Washington? Paul’s Senate office did not respond to requests for comment.

Rand Paul, though, has not been shy about accepting campaign money from the sort of special-interest wheedlers he has excoriated. According to data assembled by the Center for Responsive Politics, Paul has pocketed $83,000 from donors who have been registered lobbyists or who work in the government relations industry (or are married to someone who does). This list includes donors who toil for the top lobbying and law firms of Washington, including the Podesta Group; the Duberstein Group; Akin Gump; Quinn, Gillespie and Associates; Ogilvy Government Relations; and the Livingston Group.

On the campaign trail, Paul claimed he was eager to beat back in Washington the undue influence of corporations (such as Halliburton) and lobbyists who grease the wheels of government with campaign cash. But he appears to have abandoned his desire to curtail the government-lobbyists-donations nexus. Instead, he has benefited from it.