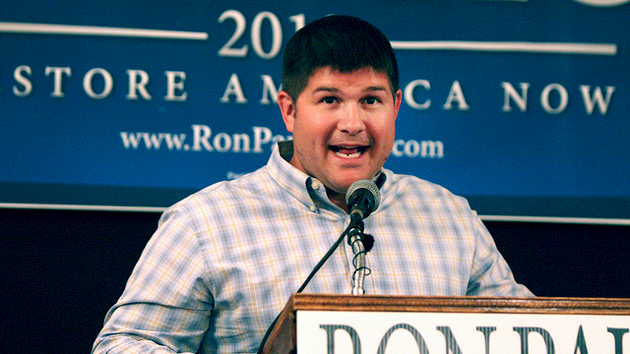 An intriguing catfight has been brewing on the right—and it could possibly affect the reelection campaign of Sen. Mitch McConnell (R-Ky.), the Republican Senate leader. A former aide to Rep. Michele Bachmann (R-Minn.) has asked the Federal Elections Commission to investigate whether Ron Paul’s 2012 presidential campaign violated federal law by bribing an Iowa state senator to win his endorsement. The complaint letter, sent by ex-Bachmanner Peter Waldron, charges that senior members of Paul’s campaign—including Jesse Benton, who is now McConnell’s campaign manager—were party to the bribe or knew about it. The role of specific Ron Paul aides in the scheme is unclear, but a 2013 Iowa Senate Ethics Committee report cited by Waldron states that the Paul campaign exchanged money to purchase the endorsement.

The controversy concerns the curious actions of a prominent local politician during the 2012 Republican caucuses in the Hawkeye State. Then-GOP state Sen. Kent Sorenson was an influential figure in the social-conservative wing of the state Republican Party, and he had offered his support to Bachmann’s presidential effort early in the 2012 campaign. Sorenson and Bachmann were natural allies; both were crusaders against abortion and same-sex marriage. Sorenson served as co-chairman of Bachmann’s campaign in Iowa and was a frequent surrogate speaker for her. But less than a week before caucus day, Sorenson made a surprise appearance at a Ron Paul rally in Des Moines, where he shocked Iowa political observers by switching his endorsement to the libertarian candidate.

Bachmann immediately cried foul. “Kent Sorenson personally told me he was offered a large sum of money to go to work for the Paul campaign,” she said shortly after he flipped. At the time, Bachmann’s claim was largely written off as an accusation leveled by a candidate in a political death spiral. But in recordings of phone calls leaked last year to the Iowa Republican, a conservative website covering Iowa politics, Sorenson said that he had received, by way of his wife, a check from Paul’s deputy campaign manager, Dimitri Kesari. A subsequent investigation by the Iowa Senate Ethics Committee revealed that Kesari had paid Sorenson $25,000 for his endorsement. Sorenson also received $73,000 in subsequent payments of unknown origin, though the committee had a “strong suspicion” that money was also tied to the Paul campaign. Sorenson resigned from the state Senate as a result.

On Monday, the Iowa Republican published a complaint letter Waldron sent to the FEC at the end of February. In the letter, Waldron claimed that Benton, who had been the chairman of Ron Paul’s presidential campaign, and other Paul campaign aides had known about or had been involved in the bribe. The FEC responded last week by noting that it would follow is usual procedure and request responses from those Waldron had accused. After receiving those responses, the FEC told Waldron, its analysts would examine the allegation and decide whether or not to recommend a full investigation.

Benton is a close ally of the Paul family. In addition to guiding Ron Paul’s 2012 campaign, he’s married to the former congressman’s granddaughter. He also worked for Rand Paul’s 2010 Senate campaign, living in the younger Paul’s basement. In late 2012, Mitch McConnell brought Benton on board to manage his reelection in an attempt to assuage the Paulites and tea partiers in Kentucky.

Benton’s involvement, if any, in the Sorenson affair is murky. In one of the leaked phone calls, Sorenson says, “Oh, I know Jesse knows. I know Jesse knows,” while discussing the check he received from the Paul campaign. But in a leaked phone call between Benton and former Ron Paul aide Dennis Fusaro, Benton says, “I don’t know anything about that,” when Fusaro referenced the allegation that Sorenson had been bribed. During the call, Benton says, “I’ve got shared responsibility, so if you’ve got proof, I’d like to take action.”

Waldron’s complaint mentioned several other Republicans who would probably participate in a Rand Paul presidential campaign, should the senator run for the White House in 2016. These include John Tate, Ron Paul’s 2012 national campaign manager, and Drew Ivers, a longtime Paul organizer in Iowa.

Benton and the McConnell campaign did respond to requests for comment.