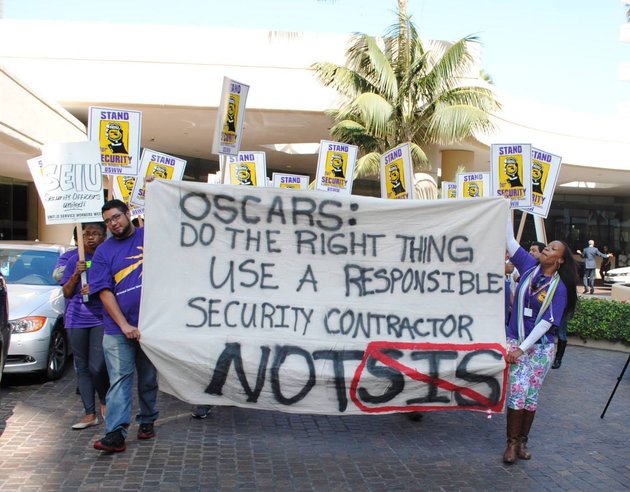 The Oscars air Sunday, but this year, the stars of the silver screen will be faced with picket lines and protesters.

“We don’t think [the Academy] should be using a company that has this kind of record,” SEIU campaign director Sam Kehinde explains. “All we are trying to do is make sure the public knows about it and the client knows.”

SEIU activists bearing banners and signs voiced their concerns at last week’s Nominee Lunch in Beverly Hills, but they were unable to relay their concerns to Academy representatives. Now, Kehinde says, the union is back for round two.

Over 100 SEIU activists—including current and former SIS employees—will converge near the Dolby Theatre on Friday afternoon in the hope of attracting attention from the public and entertainment industry officials who will be on site preparing for Sunday’s event, Kehinde says. The protesters plan to follow up with a smaller protest on Sunday, when it will be more difficult for a large group to gain access to the area.

Daivon Young, an SIS security specialist assigned to Amazon, is traveling all the way from Seattle to participate in the protest. He says he is scared about his job security and how he will be treated after speaking out against SIS, but “it is the right thing to do.”

Young has been an SIS employee for a year and a half and works at the high-security buildings. Though he is considered a specialist, he makes $15.50 an hour and is given 36 hours a week. He says he thinks the wage is good but many employees are only offered part-time work.

As the sole breadwinner supporting his three-month-old son, Malachai and his wife, Lavicy, Young’s concerned. “It is important for me to be able to provide for my family,” he says. “Me, growing up, I didn’t have a mom. I didn’t have my dad. Putting a roof over my son’s head—it means everything to me.”

Young describes the pressure he feels at work and says the simplest mistake will result in termination. He is often fearful about being penalized and says he feels belittled by his employers. Provoked by these concerns, he turned to the internet. “I wanted to look up reports about SIS,” he explains, “to see if the same things were going on somewhere else.” He landed on their “Union Facts” page, meant to derail and disprove the accusations SEIU laid against SIS. “It started naming all these things and, in my head I am thinking, ‘You do do that!” Young exclaims. 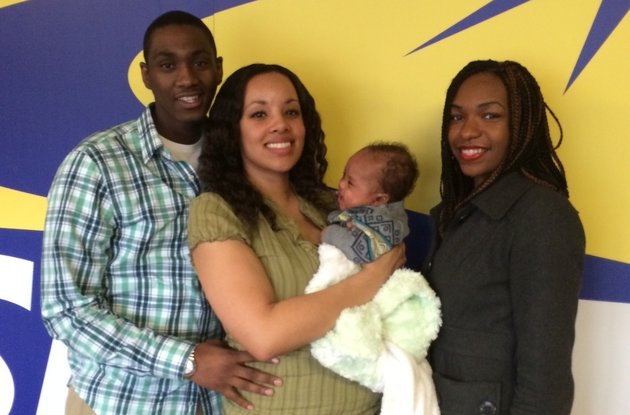 He says he had never considered the union before then and had been told explicitly as an employee he should not become involved with SEIU. “I understand now why we need a union,” he adds. This is why he hopes his participation in the protest will make a difference.

Tom Seltz, copresident and CFO of SIS, says the union’s allegations are unsubstantiated. He sees the Oscar protests as a form of harassment—a ploy for union officials to collect more money.

Seltz says unions are unnecessary and says he sees no need for his employees to join. He emphasizes that it is still up to workers to make up their minds and denies claims that his company has used intimidation tactics to deter union involvement.

SIS pays employees higher than the average hourly wage for the industry, but only half of SIS workers are full time and receiving benefits. Seltz says this has more to do with the nature of the work and client needs than company policy, and that many SIS employees are off-duty police officers who can only work part-time or are hired to work temporarily for specific events.

But Steve Amitay, the executive director of the National Association of Security Companies, says the industry norm is to employ workers full time. “Currently the majority of security officers at most contract security companies are full-time employees,” he explains via email. Though Amitay acknowledges that there are instances when part-time work is warranted, he says that “some companies believe that the offer of part-time employment may deter the best job candidates and work against creating a dedicated and experienced workforce.”

Daivon Young says he hopes his presence at this weekend’s protest will help convince his company to be more supportive of unionization. “All I want done is for SIS to allow us to have a union,” he says. “We aren’t asking for extra mayonnaise and extra pickles. We just want to be treated right.”