On Wednesday, Malaysian police announced that a flight simulator belonging to Zaharie Ahmad Shah, the captain of Malaysia Airlines flight 370, was missing data that had been erased about a month before the plane disappeared, potentially as part of routine computer maintenance. In an investigation that has produced precious few clues—on Thursday Australian officials were investigating debris found via satellite imagery—Shah’s background, naturally, is being closely analyzed by authorities, including the FBI. But Shah—who liked to cook, watched atheist videos, and who was a fan of a democratic opposition leader in Malaysia—didn’t express any suspicious sentiments on his public Facebook page. On the contrary, in an exchange that occurred shortly after the Boston Marathon bombings, he criticized his Facebook friend, Muhammad Khatif Mohd Talha, a self-identified former captain at Malaysia Airlines, for promoting the conspiracy theory that the bombing was a “False Flag attack by the Satanist elite.” 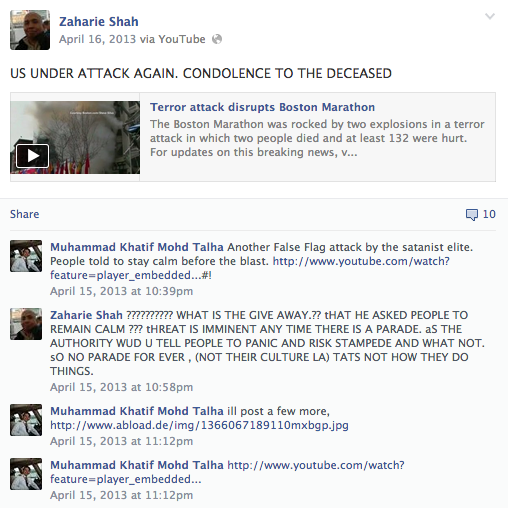 To convince Shah, Talha posted a clip from a press conference during which Boston authorities ignored a shouting conspiracy theorist who claimed that local officials had called for public calm before the bombings. Shah didn’t buy this, and he told Talha it would have been natural for authorities to request calm and order during a large public event.

In the second part of the discussion thread, Talha posted a tweet from the Boston Globe, reporting that Boston officials had announced a controlled explosion as part of post-attack bomb squad activities, as if this supported the notion that the Boston Marathon was some sort of inside job. Shah replied, sarcastically, “Wow now we get to believe the police (GOV) of blewing up people.”

The public Facebook postings do not indicate what kind of relationship Muhammad Khatif Mohd Talha and Shah maintained, if any, in real life. (Talha is one of Shah’s 239 friends.) But they do have several mutual Facebook friends who work in the airline industry. On his Facebook page, Talha, who refers to himself as a former pilot for Malaysia Airlines, expresses support for a wide range of conspiracy theories: “satanic” symbolism in Katy Perry videos, weather warfare, and vaccines and autism. He writes often of a coming apocalypse and is a member of a “Malaysian Preppers” Facebook group, and he posts regularly about his religious beliefs (including his support for Islamic law) and what he believes is the imminent collapse of the global economy. Shortly after the plane’s disappearance, Talha posted, in Malaysian, “Thank you all for your wishes for me. God- willing, I pray for the best for everyone.” Talha did not respond to requests for comment. 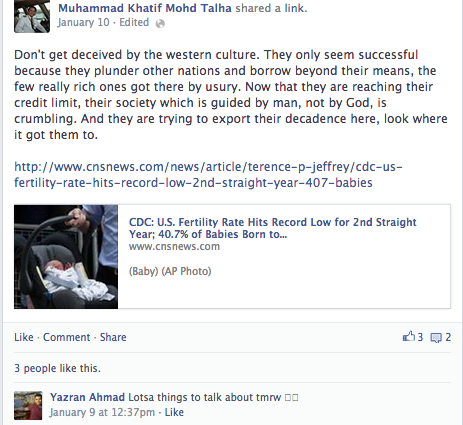 Yazran Ahmad, who replied to Talha’s Facebook post above, was Facebook friends with Talha and Shah, and he notes on his Facebook page that he studied at the Malaysian Flying Academy. On March 8, he wrote a poignant note regarding the missing airline. (Ahmad did not respond to request for comment.) 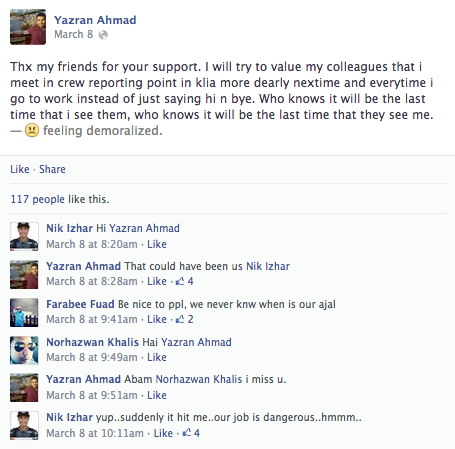