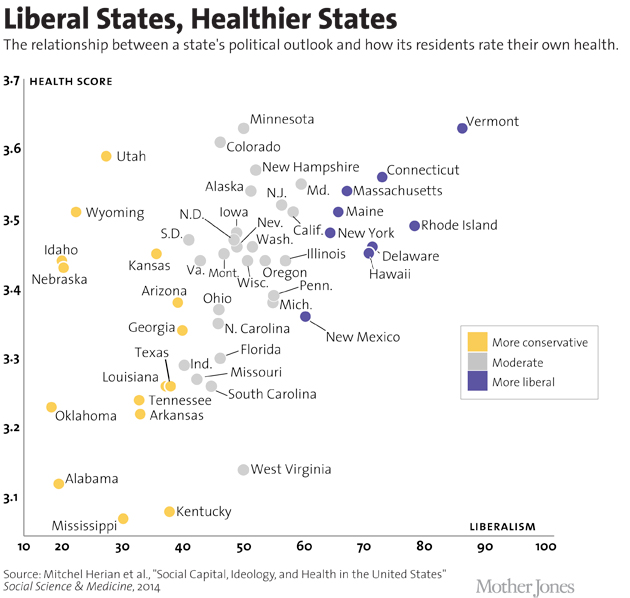 Thanks to the US Supreme Court’s ruling on Obamacare, states do not have to participate in one of its signature initiatives: The expansion of the Medicaid program to cover more individuals. And once the Supreme Court opened this door, there was a clear pattern to which states ran out of it: From Mississippi to Oklahoma, the states that didn’t get on board tended to be more politically conservative. And so they in effect denied many of their residents, especially the working poor, access to affordable health coverage.

According to a new study in the budding field of what is sometimes called “political epidemiology,” that pattern shouldn’t be surprising. The paper—recently published in the journal Social Science and Medicine by political scientist Mitchel Herian of the University of Nebraska-Lincoln and his colleagues—looks at how each US state fares when it comes to the health of its residents. And they find that “the presence of a more liberal government is related to a higher rate of reported health, a lower rate of reported smoking, lower BMI, and fewer numbers of days with poor health.”

The chart above shows this relationship for one of the health variables considered in the study. Using data from the study’s authors, we categorized states as liberal, conservative, or moderate. (To determine a state’s level of liberalism, the researchers used an index that takes into account factors ranging from how interest groups like the NRA and Americans for Democratic Action rate the state’s congressional representatives to the composition of the state legislature.) 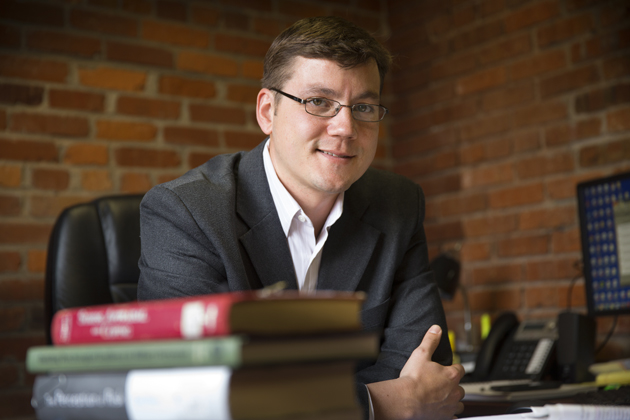 For health data, meanwhile, Herian and his colleagues used the Centers for Disease Control and Prevention’s 2010 Behavioral Risk Factor Surveillance System (BRFSS), a vast survey that gave the study a sample size of over 450,000 people. One question in the BRFSS asks people about their “general health”: Individuals are asked to rate their health on a scale of 1 to 5, from “poor” to “excellent.” The average state scores on this question are plotted above. As you can see, while there are some exceptions, the pattern is pretty clear overall: Liberal states tend to fare better on this health measure, and many conservative states do worse. (You’ll also notice that a few conservative states actually have pretty healthy populations. The researchers have an explanation for that, which we’ll unpack below.)

Why might liberal states have healthier residents? The hypothesis that Herian’s paper set out to test is quite simple: Democratic or liberal states do more to make their populations healthier—for example, through spending more on health care programs and general social safety net programs. And those policies work, or at least mostly work; hence, their populations are indeed healthier. “We’re definitely talking about the election of Democrats leading to better health outcomes because they adopt policies designed to lead to the better well being of individuals,” says Herian. (Conservatives: Before you cite the Oregon Medicaid study to claim that these types of program don’t actually work to make people healthier, see here.)

Indeed, the liberalism-health relationship holds up for a number of measures in the BRFSS, such as a measure of “poor health,” which asks individuals, “During the past 30 days, about how many days did poor physical or mental health keep you from doing your usual activities such as self-care, work, or recreation?” Below is a chart showing the relationship between days of reported ill health and a state’s level of liberalism: 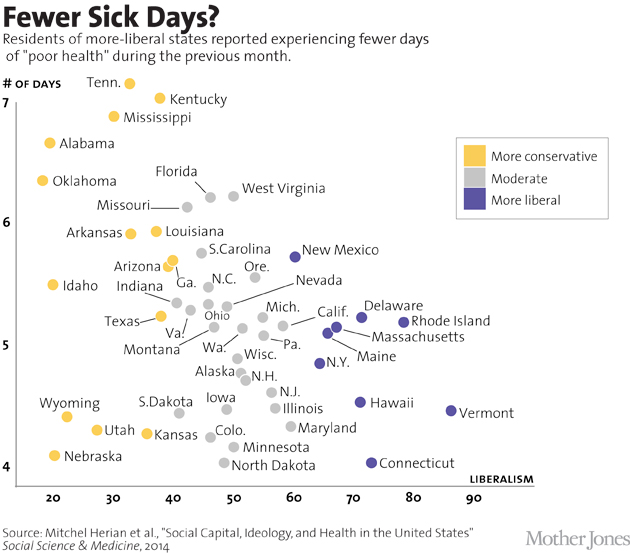 And as noted above, the study also examined smoking and obesity rates; these, too, showed a similar pattern.

Now, we know what you’re thinking: Correlation isn’t causation. Maybe there’s some other factor out there explaining the relationship between a state’s degree of liberalism and the health of its residents. But in the study, Herian and his colleagues controlled for some of the most obvious factors that might confound this analysis: education, for instance, and income.

There is a silver lining in the study for some conservative states. Another factor, referred to in the study as “social capital,” also predicted better state-level health outcomes. This basically means having a strong sense of community where you live and being able to trust your neighbor; it is measured with a single yes-or-no survey question: “If you lost a wallet or a purse that contained two hundred dollars, and it was found by a neighbor, do you think it would be returned with the money in it, or not?”

Why living in a place where you’re more trusting of your neighbors equates to better health isn’t entirely clear. But one idea, according to Herian, is that “in places of higher levels of trust, there might be more voluntary organizations, religious organizations, that are designed to improve the health and well being of people.” (Indeed, one of the leading theorists of social capital, Robert Putnam, put considerable emphasis on the role of religion in cementing community bonds in his influential book Bowling Alone.) The study found that in states with high levels of liberalism, social capital didn’t have all that much of an impact on health. However, in conservative states, social capital (or the lack thereof) made a big difference.

Utah and Wyoming are two conservative states that do quite well on health measures, and they have very high levels of social capital or trust. By contrast, states like Mississippi and Kentucky have low social trust and high conservatism, and poor health outcomes. 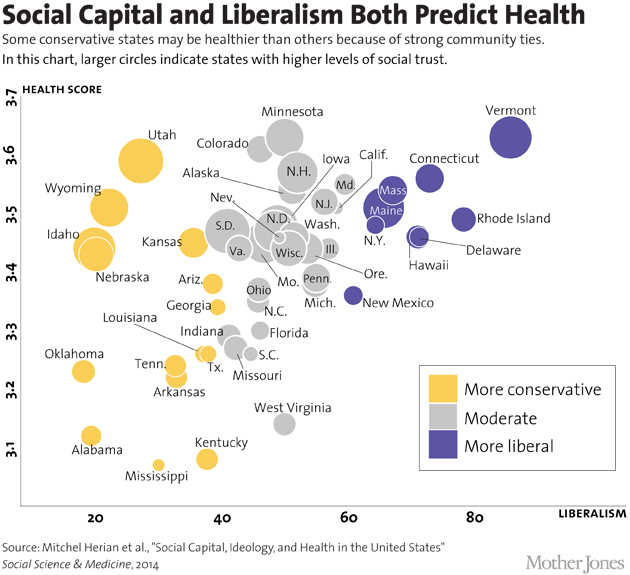 On the chart above, social trust is denoted by the size of a state’s circle. Bigger circles signify greater social trust, and smaller ones signify less. As you can see, this acts somewhat to counter the overall pattern of liberal states being healthier—but only for some states.

During a Republican presidential primary debate before the 2012 election, Wolf Blitzer famously asked Ron Paul a “hypothetical question” about a 30-year-old healthy man who foregoes health coverage because he doesn’t think he needs it, and then has a serious health problem and winds up in a coma. “Who pays for that?” Blitzer asked, later adding, “Congressman, are you saying that society should just let him die?” That’s when the tea party shouts of “yeah” could be heard from the audience.

Paul himself did not endorse the “let him die” option. Rather, Paul said that in his early days as a doctor, “the churches took care of them” in such cases. He also mentioned the role of neighbors and friends in helping to take care of the sick. (Watch the video here.)

Perhaps Paul was only half right. In some conservative communities, that 30-year-old guy might indeed have been taken care of. In others, maybe not so much.