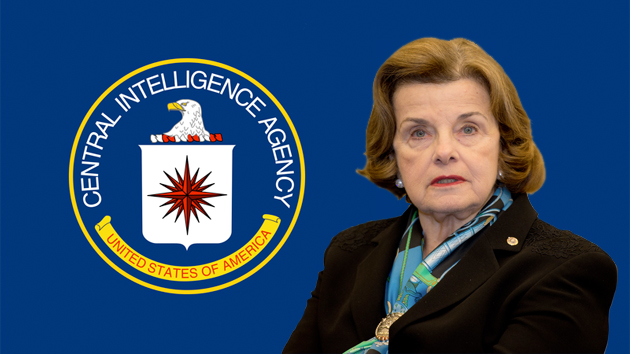 This morning, on C-SPAN, the foundation of the national security state exploded.

Sen. Dianne Feinstein (D-Calif.), the chair of the Senate intelligence committee, took to the Senate floor and accused the CIA of spying on committee investigators tasked with probing the agency’s past use of harsh interrogation techniques (a.k.a. torture) and detention. Feinstein was responding to recent media stories reporting that the CIA had accessed computers used by intelligence committee staffers working on the committee’s investigation. The computers were set up by the CIA in a locked room in a secure facility separate from its headquarters, and CIA documents relevant to the inquiry were placed on these computers for the Senate investigators. But, it turns out, the Senate sleuths had also uncovered an internal CIA memo reviewing the interrogation program that had not been turned over by the agency. This document was far more critical of the interrogation program than the CIA’s official rebuttal to a still-classified, 6,300-page Senate intelligence committee report that slams it, and the CIA wanted to find out how the Senate investigators had gotten their mitts on this damaging memo.

The CIA’s infiltration of the Senate’s torture probe was a possible constitutional violation and perhaps a criminal one, too. The agency’s inspector general and the Justice Department have begun inquiries. And as the story recently broke, CIA sources—no names, please—told reporters that the real issue was whether the Senate investigators had hacked the CIA to obtain the internal review. Readers of the few newspaper stories on all this did not have to peer too far between the lines to discern a classic Washington battle was under way between Langley and Capitol Hill.

Then Feinstein went nuclear. For more than a half hour this morning, she gave what she called a “full accounting.” She began by noting her reluctance to go public:

Let me say up front that I come to the Senate floor reluctantly. Since January 15, 2014, when I was informed of the CIA search of this committee’s network, I’ve been trying to resolve this dispute in a discreet and respectful way. I have not commented in response to media requests for additional information on this matter; however, the increasing amount of inaccurate information circulating now cannot be allowed to stand unanswered.

In other words, she felt that the spies were leaking false information to nail her and her staffers. So she was upping the ante by taking this dispute out of the shadows.

Feinstein said that the CIA appeared to have violated the Fourth Amendment barring unreasonable searches and seizures—and perhaps other federal laws and a presidential executive order prohibiting the CIA from domestic searches and surveillance. She confirmed that the Justice Department was on the case. She said she has demanded an apology from the CIA and an admission that the agency’s search of the intelligence committee’s computers was wrong. “I have received neither,” she declared.

This unprecedented speech by Feinstein has ramifications beyond the immediate controversy over the CIA search. It undermines the basis for secret government.

The United States is a republic, and elected officials in all three branches are supposed to be held accountable by those famous checks and balances that school kids learn about in civics classes. When it comes to the clandestine activities of the US government—the operations of the CIA, the other intelligence outfits, and the covert arms of the military—the theory is straightforward: These activities are permitted only because there is congressional oversight. The citizenry is not told about such actions because doing so would endanger national security and render these activities moot. But such secret doings of the executive branch are permissible because elected representatives of the people in the legislative branch monitor these activities and are in a position to impose accountability.

That’s how it’s supposed to work. But since the founding of the national security state in the years after World War II, there have been numerous occasions when the spies, snoops, and secret warriors of the US government have not informed the busybodies on Capitol Hill about all of their actions. In the 1970s, after revelations of CIA assassination programs and other outrageous intelligence agency misdeeds, Congress created what was supposed to be a tighter system of congressional oversight. But following that, the CIA and other undercover government agencies still mounted operations without telling Congress. (See the Iran-Contra scandal.) Often the spies went to imaginative lengths to keep Congress in the dark. More recently, members of the intelligence community have said they were not fully in the know about the NSA’s extensive surveillance programs. Of course, there was a countervailing complaint from the spies. Often when a secret program becomes public knowledge, members of Congress proclaim their shock, even though they had been told about it.

Overall, the system of congressional oversight has hardly (as far as the public can tell) been stellar. And it has raised doubts about the ability of a democratic government to mount secret ops and wage secret wars in a manner consistent with the values of accountability and transparency. What was essential to decent governance on this front was the delicate relationship between congressional overseers and the intelligence agencies. The intelligence committees have to be forceful and fierce in monitoring the spooks (a responsibility often not met), and the spies have to be cooperative and forthcoming (again, a responsibility often not met). There has to be trust. The committees have to hold faith that the agencies are indeed coming clean, for there is no way a handful of congressional investigators can fully track all the operations of the massive intelligence establishment, and the agencies have to be assured that secrets they shared with the investigators will not be leaked for political purposes. And at the end of the day, elected representatives have to be able to come to the public and say, “We’re keeping a close eye on all this secret stuff, and we are satisfied that we know what is happening and that these activities are being conducted in an appropriate manner.” If such credible assurances cannot be delivered, the system doesn’t work—and the justification for allowing secret government within an open democracy is in tatters.

Which is where we are today. Feinstein, no firebrand, is in open war with the CIA. Her speech outlined plenty of trouble she had reviewing the CIA interrogation and detention program—before the computer search imbroglio. She decried “CIA interference in our investigation.” And she maintained that her investigators had not hacked the CIA to get the internal review. “We don’t know whether the documents were provided intentionally by the CIA, unintentionally by the CIA, or intentionally by a whistle-blower,” she said, raising the possibility that the CIA itself had failed to maintain a cover-up. And she noted that this internal review—unlike the CIA’s direct response to the intelligence committee’s report—contained “acknowledgement of significant CIA wrongdoing.” She reported that the CIA has refused to answer questions she has submitted about the agency’s search of the committee’s computers.

So here we have the person assigned the duty of guaranteeing that the intelligence establishment functions effectively and appropriately, and she cannot get information about how the CIA meddled in one of her own investigations. This is a serious breakdown. And by the way, Feinstein has still not succeeded in forcing the CIA to declassify her committee’s massive report on the interrogation and detention program. [Correction: The Senate intelligence committee is updating the report, and Feinstein said she intends to “to move to have the findings, conclusions and the executive summary of the report sent to the president for declassification and release to the American people.” The White House says it wants to receive the report from the committee so it can put the report through the declassification process and release the appropriate sections.]

Here is how she summed up the current state of play:

If the Senate can declassify this report, we will be able to ensure that an un-American, brutal program of detention and interrogation will never again be considered or permitted. But, Mr. President, the recent actions that I have just laid out make this a defining moment for the oversight of our intelligence committee. How Congress and how this will be resolved will show whether the intelligence committee can be effective in monitoring and investigating our nation’s intelligence activities or whether our work can be thwarted by those we oversee.

What Feinstein didn’t say—but it’s surely implied—is that without effective monitoring, secret government cannot be justified in a democracy. This is indeed a defining moment. It’s a big deal for President Barack Obama, who, as is often noted in these situations, once upon a time taught constitutional law. Feinstein has ripped open a scab to reveal a deep wound that has been festering for decades. The president needs to respond in a way that demonstrates he is serious about making the system work and restoring faith in the oversight of the intelligence establishment. This is more than a spies-versus-pols DC turf battle. It is a constitutional crisis.