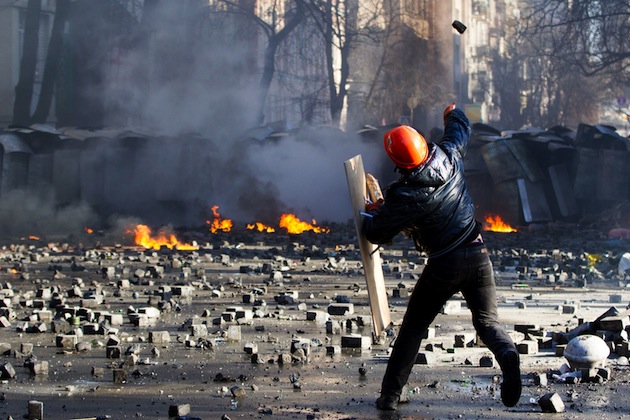 This article is being updated as news breaks. Click here for the latest.

At least 26 were killed and several hundred were injured Tuesday and Wednesday in the Ukrainian capital, Kiev, as police cracked down on the protest movement that has gripped the Eastern European nation for months. Several local news outlets—including Ukraine’s Espreso TV—are live streaming the swelling crowds, large-scale fires, and numerous explosions at the opposition camps. The harrowing video feed is below:

The EuroMaidan protests, which started on November 21 in response to President Viktor Yanukovych’s rejection of a European Union trade deal, have been going on for nearly three months. Early Tuesday, the US Department of State released an emergency message warning about escalating violence and potential “extraordinary measures” by the Ukrainian Security Services.

As the Washington Post‘s Max Fisher explains, the conflict is fueled by sharp political and ethnic divides. A significant portion of the population wants closer ties to Europe, but Putin has been pressuring Yanukovych’s government toward closer economic integration with Russia.

The protests turned violent in late November, with police deploying batons, tear gas, and even attacking journalists. In mid-January, the government enacted a series of anti-protest laws restricting freedom of assembly and speech. Though Prime Minister Mykola Azarov resigned and many of these laws were later repealed, the damage was already done. Yanukovych, who had previously been linked to vote-rigging during the infamous 2005 Orange Revolution, has also been accused of corruption, mismanagement, and human rights violations. To many citizens, the laws only reinforced that view. Allegations of torture and disappearances continued throughout January as the protests spread.

Protesters in Kiev have occupied city hall and other government buildings for the last two months. This weekend, after officials promised to give them amnesty if they ended their occupation, the demonstrators agreed and partially dismantled their barricades, making Tuesday’s crackdown all the more ironic.

As with any uprising, it’s too early to call which direction the protests could go, but some analysts are warning a civil war is possible. Here are a few recent images of the scene in Kiev: 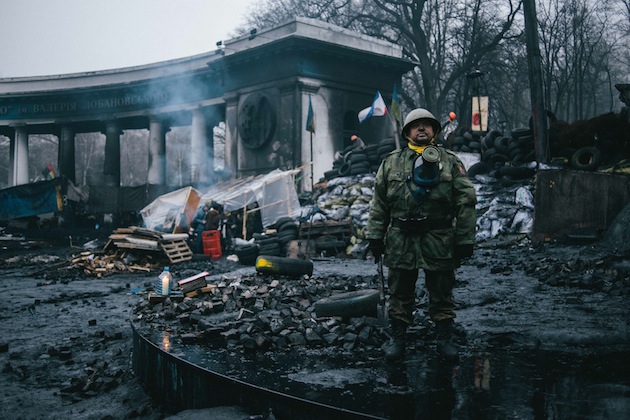 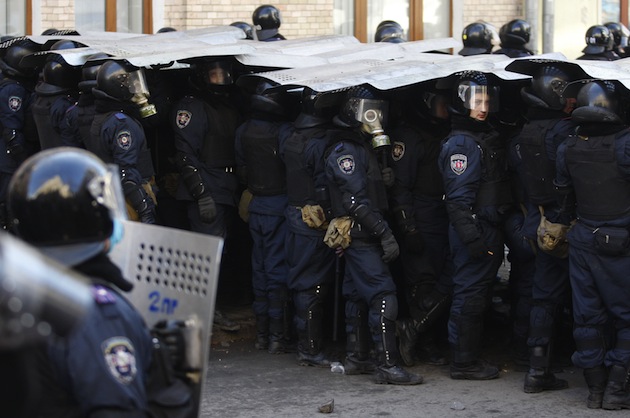 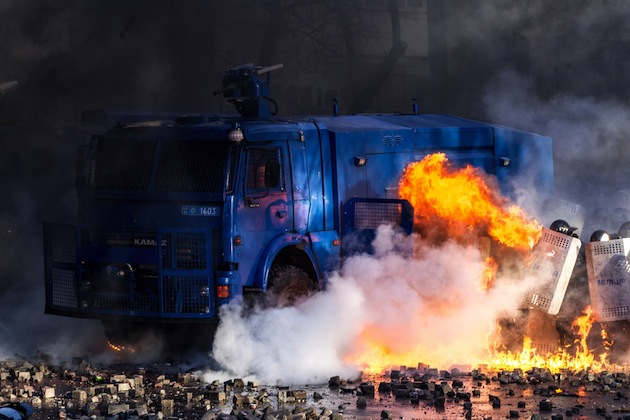 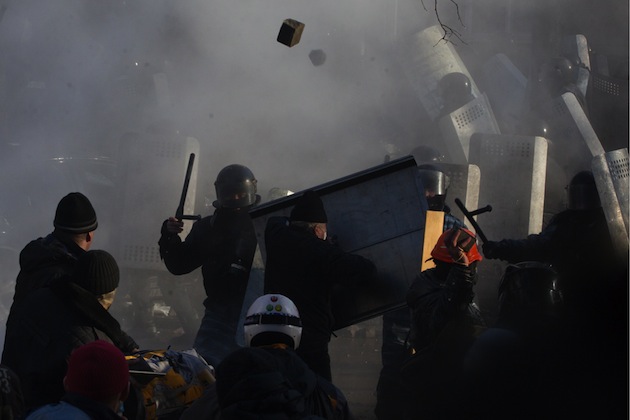 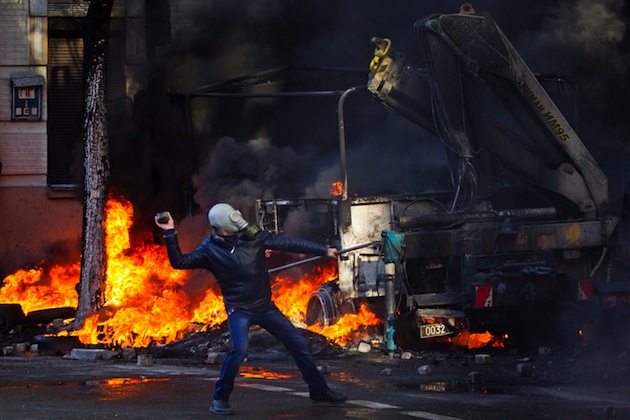 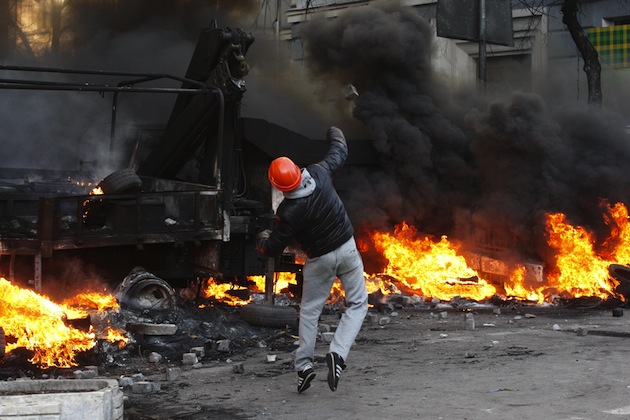 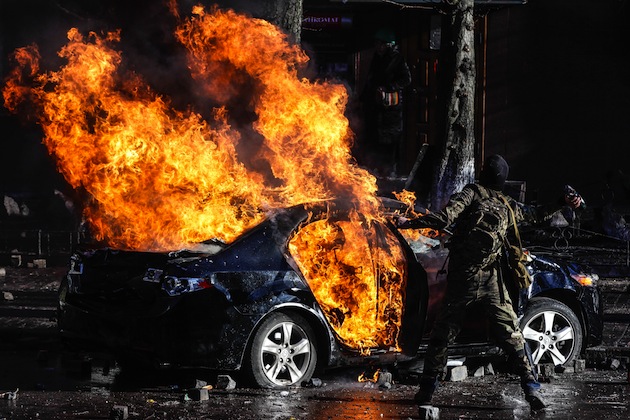 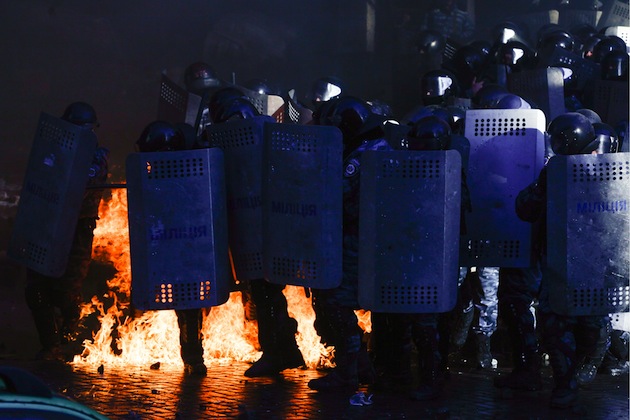 UPDATE, Thursday, February 20, 12:47 p.m. PST: In another day of record violence, clashes between demonstrators and police forces left as many as 70 dead Thursday, according to the Associated Press.

It’s unclear what ended Wednesday night’s truce; by Thursday morning there were reports of police firing sniper rifles, shotguns, and assault rifles into the crowd. Likewise, demonstrators fired guns and gasoline bombs as they fought to reoccupy the territory they lost earlier this week. Live streams showed clouds of smoke, people being carted away on stretchers, and dozens of police held hostage by protesters.

In response to the violence, the formerly pro-government mayor of Kiev, Volodymyr Makeyenko, resigned from his post along with 12 other deputies. Elsewhere in Ukraine, protesters are being accused of beating and dragging Lutsk Gov. Aleksandr Bashkalenko, forcing him to resign. Some of the Ukrainian Olympic athletes currently competing in Sochi, Russia, asked to be allowed to protest by wearing black armbands, but were barred from doing so by the International Olympic Committee. Many simply left the Games.

Earlier today, the European Union agreed to impose sanctions including asset freezes and visa bans against the responsible parties. The United States has placed a travel ban on 20 senior Ukrainian officials, and this morning, the White House declared “outrage” at Ukrainian security forces for “firing automatic weapons on their own people.” Presumably the US is working behind the scenes as well—and hoping its diplomats’ phone calls don’t end up on Youtube again.

UPDATE 2, Thursday, Feburary 20, 2:44 p.m. PST: Some good news: the Parliament of Ukraine has adopted a resolution to stop the crackdown on protestors by demanding the removal of military and police from the square and an end to the use of weapons against citizens. The resolution would also open investigations into deaths and casualties, allow for victim compensation, and ensure only Parliament can declare a state of emergency.

AFP is also reporting that President Yanukovych told EU convoys he was willing to hold early elections. The question now is whether or not this will come to fruition.

UPDATE 3, Friday, February 21, 9:13 a.m. PST: Ukrainian President Viktor F. Yanukovych signed an agreement with opposition leaders Friday that would guarantee early elections in hopes of bringing an end to the protests in Kiev. However, questions remain as to whether the agreement will actually sway the oppositional rank-and-file. “People will never trust any kind of signature,” Parliament member Arseniy Yatsenyuk told the New York Times. “People will trust real action.”

UPDATE 4, Saturday, February 22, 10:15 a.m. PST: Earlier today, the Ukrainian parliament voted to remove President Yanukovych from power and hold elections on May 25. In a televised address before the vote, Yanukovych announced he refused to resign and described the situation as a coup. Abandoned by Yanukovych, his house and presidential palace have been taken over by protestors. Four Ukrainian security chiefs further declared allegiance to the protestors.

This is the house the president never wanted his people to see pic.twitter.com/PiAQjVNumU

Former Prime Minister and prominent opposition leader Yulia Tymoshenko—who was imprisoned in 2011 for abuse of power over a gas deal with Russia—was also released from detention today. She has made her way to Kiev and is expected to arrive at Maidan shortly.

UPDATE 5, Saturday, February 22, 12:34 p.m. PST: Tymoshenko took the stage and declared to the crowd, “You are heroes, you are the best of Ukraine,” but cautioned that there was still work to do. “Until you finish this job and until we travel all the way, nobody has the right to leave,” she said. “Because nobody could do it – not other countries, nobody – could do what you have done. We’ve eliminated this cancer, this tumour,” she said.

An emotional Tymoshenko from Maidan stage: “Heroes never die, they will always be with us, they will be our inspiration.”

Yulia Tymoshenko seems to be fighting back tears as she address #Euromaidan protesters in Kiev’s Independence Square pic.twitter.com/VoE6xQXmSh 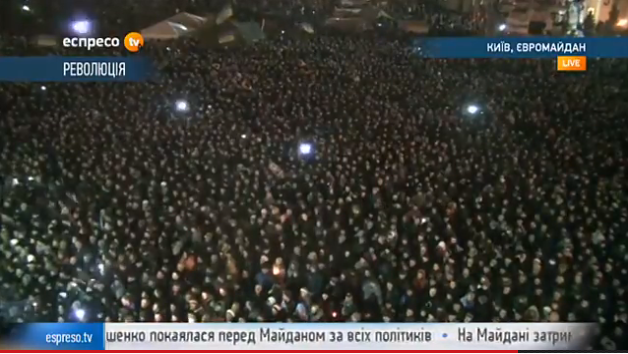 UPDATE 6, Monday, February 24, 11:42 a.m. PST: This morning, the Ukrainian Parliament issued an arrest warrant for ousted President Yanukovych, who fled from Kiev on Saturday. Though his current location is unknown, reports came in from border police that they stopped his plane in the eastern city of Donetsk while trying to leave the country.

Ukraine’s acting interior minister, Arsen Avakov, said the authorities were searching for the ousted president on charges of mass murder. According to the Kyiv Post, Ukrainian MP Hennadii Moskal is further alleging Yanukovych planned an even greater crackdown on protestors, including the use of armored vehicles, grenades, and additional snipers.

The former speaker of Parliament, Olesandr Turchynov, is serving as interim President until elections on May 25. Nominations are expected to begin tomorrow, February 25.

UPDATE 7, Thursday, February 27, 10:02 a.m. PST: In a week already marked by political turbulence, tumultuous news is coming from Ukraine again. Over the last two days, Ukraine’s Parliament voted to send former President Yanukovych to The Hague over last week’s violence in Kiev. Yanukovych, who has fled to Russia, maintains he is still the elected president of Ukraine, and is expected to deliver a press conference from the city of Rostov-on-Don tomorrow.

The Ukrainian Parliament has also appointed Arseny Yatsenyuk, the head of Yulia Tymoshenko’s Batkivshchyna party to serve as official Prime Minister over a coalition of politicians and citizen activists until the democratic elections on May 25. Some reports are coming in that right-wing nationalist groups may become increasingly involved in other sectors of the government as well.

Also today, in the Crimean capitol of Simferopol, a group of armed men seized the parliament building, blockaded the doors, and raised the Russian flag, worrying many that the crisis is far from over. The takeover came hours following a protest by thousands of ethnic Russians against the new national government.

UPDATE 8, Friday, February 28, 12:23 p.m. PST: AFP and Sky News are reporting that, according to a Ukrainian official, Russian aircraft have landed near a Russian base in the Crimean Peninsula carrying nearly 2,000 people. This follows earlier reports that armed groups of men in unmarked camouflage have taken over two airports, and started patrolling in and around the facilities and roads.

Interim President Turchynov is accusing Russia of provoking Kiev into an armed conflict to annex Crimea. Others are calling the action an “armed invasion,” but the Russian navy is denying those claims. The United Nations Security Council is currently holding an emergency session on the escalating crisis.

This morning, Yanukovych made his first public appearance since Saturday, rejecting claims that he was overthrown and saying he was forced to leave Kiev under threat of death. He also stated his insistence against outside military intervention. The interim Ukrainian government has formally requested his extradition from Russia.

President Obama is expected to make a statement on the recent developments at 4:45 EST. You can watch live here.

UPDATE 9, Friday, February 28, 2:16 p.m. PST: In a televised address, President Obama announced that he is “deeply concerned” with Russian troop movements in Ukraine, claiming any violation of Ukraine’s national sovereignty would be “deeply destabilizing” for the transitional country. He further warned that “there will be costs for any military intervention in Ukraine,” but neglected to mention specifics.

UPDATE 11, Thursday, March 6, 10:30 am PST: After a tense week of negotiations, President Obama announced this morning a range of sanctions blocking visas and financial transactions for Russian officials in response to Russia’s military occupation of Crimea. In addition, the White House agreed to a NATO mission sending troops and F-15 fighter jets to eastern Europe.

Obama also denounced a proposed March 16 referendum by the Crimean parliament to join Russia, agreeing with acting Ukrainian Prime Minister Yatsenyuk  that such a move would violate international law. “Any discussion about the future of Ukraine must include the legitimate government of Ukraine,” Obama said, noting that if Russia continues to violate international law, the US and its allies “will remain firm.”

Still, the speech wasn’t enough for some members of Congress. Sen. Lindsey Graham (R-S.C.) released a press statement saying that Obama hadn’t moved quickly enough. On Tuesday, Graham tweeted that the Ukrainian crisis “started with Benghazi.” Sen. John McCain (R.Ariz) has led the charge against what he calls Obama’s “feckless” foreign policy: “The president of the United States believes the Cold War is over; fine—it’s over. But Putin doesn’t believe it’s over.” Yet after Obama’s statement on Thursday, McCain tweeted, “Good remarks by Pres Obama today on #Ukraine – working on legislation now w/ Senate Foreign Relations Cmte colleagues.”

Following Obama’s remarks, the House of Representatives voted to make Ukraine eligible for $1 billion in economic aid from the State Department. The House Foreign Relations Committee further approved a resolution condemning Russia for its occupation, asking the Gang of Eight countries not to attend the upcoming summit in Sochi and to consider kicking Russia out of the group.