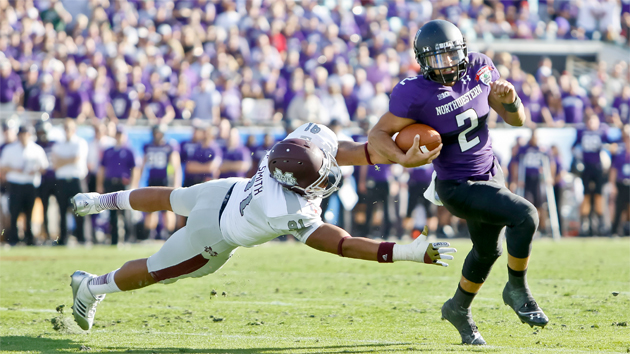 Last month, football players at Northwestern University took formal steps to organize a labor union and bargain for benefits like guaranteed multiyear scholarships and medical coverage for concussions and other long-term health issues. The first of what will likely be many battles for the unionization effort came this week, with an hearing before the Chicago regional National Labor Relations Board.

The proceeding, which will continue at least through the end of the week, has pitted the proposed College Athletes Players Association and former Northwestern quarterback (and NFL hopeful) Kain Colter against Northwestern. While the university reacted much less strongly than the NCAA when the unionization efforts were unveiled—the official university statement made sure to say that Northwestern is “proud” of its students for being “leaders and independent thinkers”—it is still the theoretical employer of Colter and the other players and thus must face off against them before the labor board. (Head coach Pat Fitzgerald is expected to testify Friday.) Here’s what you need to know about the hearings and what they mean for college football:

What does the union need to prove to win? The College Athletes Players Association, with the help of star witness Colter, is arguing that football players are employees of the university. The group has some strong arguments in its favor, according to University of Illinois law professor and sports labor expert Michael LeRoy. For one, the players work long hours equivalent to a full-time job. Colter testified that football-related activities take up 40 to 50 hours a week during the season and 50 to 60 hours a week during training camp in the summer. The players’ efforts also benefit the university—an economics professor who testified on the union’s behalf said that Northwestern’s football revenue totaled $235 million between 2003 and 2012, while its expenses added up to just $159 million during that time. “It’s a financial benefit, and that’s putting it mildly,” LeRoy said.

An economics professor who testified on the union’s behalf said that Northwestern’s football revenue totaled $235 million between 2003 and 2012.

What does Northwestern need to prove? The university’s argument is that the players are student-athletes and nothing more. The players receive scholarships worth about $60,000 a year, a university athletics official testified, and a lawyer for the school noted that players also get “a world-class education, free tutoring services, core academic advice, and personal and career development opportunity.” While some of Northwestern’s other counterpoints lacked substance—school lawyers grilled Colter on whether leadership and other skills learned from the football team helped him get a prior internship at Goldman Sachs, a line of thinking LeRoy called “fairly irrelevant” to whether or not college football counts as labor—perhaps its strongest point is that players signed a scholarship contract, agreeing to their amateur status and therefore waiving their collective bargaining power.

What happens now? No matter which side the Chicago labor board takes, the loser will probably appeal that decision to the national board in Washington, DC. That ruling will likely head to a federal appeals court. The entire process could take years, LeRoy said, which presents a unique challenge for union organizers: There’s a chance all the players who signed union cards will have graduated and moved on by the time a final decision comes down. One big question is how other schools and teams will react—while teams at private schools like Northwestern can try to unionize, teams at public schools must adhere to their states’ collective bargaining laws. If players at some schools are able to negotiate benefits that players at other schools are not, LeRoy said, it could fundamentally change recruiting, realign conferences, and lead to swaths of state legislation addressing the matter. “It’s a huge can of worms,” he said. “It’s a showstopper.”

Who’s going to win? LeRoy said he thinks the regional and national labor boards will rule in favor of the players due to the boards’ liberal slant, but that the courts will rule against Colter & Co. That won’t mean the movement was pointless, though—LeRoy expects the NCAA to compromise on many of the union’s core issues by that point. Vitally, the Northwestern players aren’t asking for pay for play, meaning the university and the NCAA could provide them with the scholarship and medical benefits they’re calling for and still maintain its structure and concept of amateurism. Even a formal union doesn’t hold up legally, LeRoy said, we may see a “union substitute” in which the threat is credible enough that the NCAA provides players with more voice and benefits. “I don’t think we’re going to have collective bargaining,” he said. “But I think this is a necessary step.”