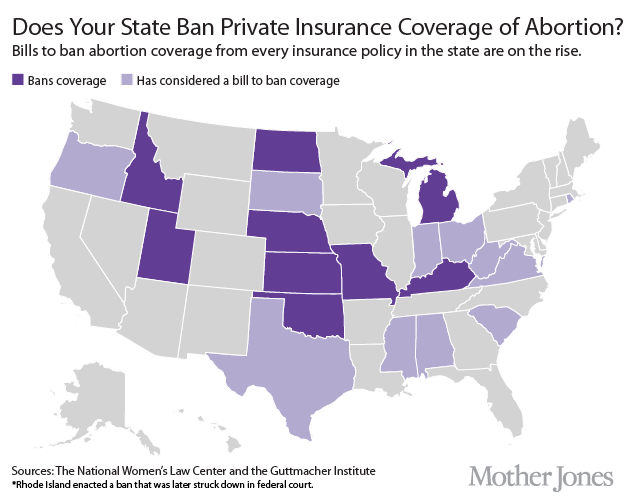 Lawmakers have tried to eliminate private insurance coverage for abortion in 20 states.Molly Redden

Last week, the GOP-led House of Representatives passed the No Taxpayer Funding for Abortion Act, a bill that would radically limit Americans’ ability to buy private-sector health insurance that covers abortion. With the Senate under Democratic control and Barack Obama in the White House, the bill is doomed to fail. But abortion foes can rest easy. Although their momentum has stalled on Capitol Hill, there is a quiet campaign underway in states across the country to outlaw private-insurance coverage of abortion—and it’s working.

Lawmakers in 24 states have already prohibited plans on the Affordable Care Act’s health insurance marketplaces from covering abortion. Now some states are going even further, targeting the tens of millions of women who receive health insurance from their private-sector employers. Nine states already have these broader bans, leaving 3.5 million women without insurance coverage for abortion. And since 2011, lawmakers in 10 more states have threatened the coverage of more than 9 million women, according to data assembled by the National Women’s Law Center, a nonprofit legal foundation focused on women’s rights.

Five states—Idaho, Kentucky, Missouri, North Dakota, and Oklahoma—have prohibited private insurers from covering abortion for years. (The oldest ban, in North Dakota, dates back to 1979.) But the 2010 elections, which swept Republicans into power in state governments around the country, renewed interest in passing these bans. And since 2010, Kansas, Michigan, Nebraska, and Utah all have passed new laws banning private insurers from covering abortions.

From 2011 to 2013, lawmakers in another 10 states—Alabama, Indiana, Mississippi, Ohio, Oregon, South Carolina, South Dakota, Texas, Virginia, and West Virginia—introduced bans on private-insurance abortion coverage, with many coming extremely close to passage, according to Elizabeth Nash, the state issues manager for the Guttmacher Institute, a pro-abortion-rights think tank.

Some lawmakers vote on these bills without understanding how drastically they curtail abortion access.

Now, just four weeks into the new year, lawmakers in Indiana, Ohio, and West Virginia are slated to consider new bills to eliminate abortion coverage from every insurance policy in the state, putting almost 2 million more women at risk of losing coverage for abortion. (That’s according to estimates by the National Women’s Law Center, which calculated how many women of reproductive age are insured through the workplace in each state.)

The millions of women who now face having to pay for abortions out of pocket will find the procedures don’t come cheap. A May 2013 study from the Guttmacher Institute found that for women whose abortions weren’t fully covered by their insurance, an abortion cost an average of $485. Half of the women who were unable to rely on insurance to pay for their abortions—either because they didn’t have it or it didn’t cover abortions—ultimately found it difficult to pay. Large numbers of those women put off paying their rent or utilities or cut back on buying food in order to afford the procedure.

Some state lawmakers appear to be voting on these bills without fully understanding how drastically they curtail abortion access. The sponsor of the Indiana bill, for example, Republican state Rep. Jeffrey Thompson, has downplayed the magnitude of the ban by saying it simply imposes uniformity between the Obamacare exchanges and the rest of the state’s insurance policies. (Language in the Affordable Care Act allowed each state to choose whether to ban abortion coverage from the exchanges, and Indiana is one of 24 states where lawmakers opted to pass such a ban.) Thompson did not reply to repeated requests for comment. His bill—which would ban all insurance coverage of abortions unless the pregnancy endangered the health or life of the mother or was the result of rape or incest—passed the Indiana House with little fanfare on January 27.

When contacted by Mother Jones, David Walker, a Democratic state senator and one of two sponsors of the West Virginia ban, seemed unaware that the bill bearing his name bans abortion coverage from private-insurance policies. “If that’s what the bill states, I would support it,” Walker says.

In other states, anti-abortion legislators have touted provisions that allow women to purchase supplemental abortion-only policies called riders. In 2011, Kansas state Rep. Pete DeGraaf claimed that the proposed ban would “just ask people to buy a rider.” After the Nebraska Senate rejected an amendment that would have forced insurers to offer riders, Beau McCoy, a state senator, said, “If a woman wants abortion coverage [through a rider], they could go out and find an insurance company that offers such coverage.” Local news coverage sometimes amplified this idea. Before the Nebraska ban passed in 2011, the Lincoln Star Journal referred to the legislation as the “abortion rider bill.”

In eight states that ban private coverage, there are no exceptions for women who have become pregnant through rape or incest.

But there are almost no examples of insurance companies offering abortion riders. In the entire country, Mother Jones could find just one major insurer that sells these special policies, Blue Cross Blue Shield of Kansas. A company spokeswoman says the coverage does not take effect until eight months after purchase. Blue Cross Blue Shield is not offering these riders with any plans that are eligible to be sold on Kansas’s Obamacare exchange. However, some private employers in Kansas also purchase those plans—meaning that their employees have already lost the ability to buy abortion riders. The spokeswoman would not disclose the price of these riders, but a 2012 Associated Press story reported that they cost $80 per person per year.

Very few of the abortion insurance bans proposed in the past three years contained exceptions for women whose pregnancies endangered their health. “That is when insurance is most essential,” says Gretchen Borchelt, the state reproductive health policy director for the National Women’s Law Center. Under those conditions, she adds, “abortion can be prohibitively expensive. Those issues often come up late in the pregnancy, and may require a more intensive hospital setting.” In eight of the nine states that have already banned private coverage—every one except for Utah—there are no exceptions for women who have become pregnant through rape or incest.

The ban Republicans pushed in Mississippi last year would have forbidden private insurers from covering abortions in any situation—even if a pregnancy threatened a mother’s life. In West Virginia, the ban introduced to the Senate only makes an exception for life-threatening situations. The bill that Ohio will consider this year, which was introduced in November, makes an exception for women suffering ectopic pregnancies, but not other life- or health-threatening conditions. State Rep. John Becker, the bill’s Republican sponsor, says the bill is “a starting point for discussion,” and that he is open to adding more exceptions.