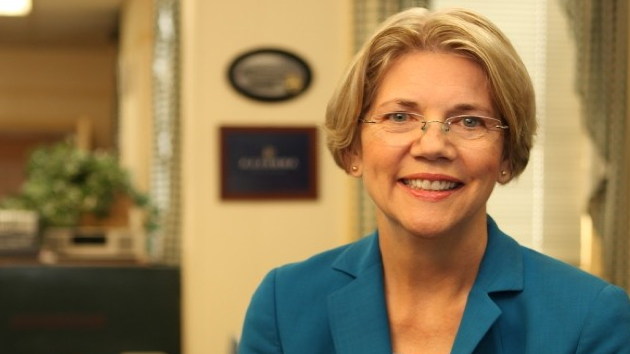 On Thursday morning, Sen. Elizabeth Warren (D-Mass.) called on President Barack Obama to nominate more judges to the federal bench who have backgrounds serving the public interest instead of corporate America.

Of Obama’s judicial nominations so far, just ten—fewer than four percent—have worked as lawyers at public interest organizations, according to a report released Thursday by the Alliance for Justice, a network of civil rights organizations. Only 10 nominees have had experience representing workers in labor disputes. Eighty-five percent have been either corporate attorneys or prosecutors. At an event Thursday sponsored by several civil rights organizations, including the Brennan Center for Justice and the Alliance for Justice, Warren called for more balance in the system.

“Power is becoming more and more concentrated on one side,” she said. “Well-financed corporate interests line up to fight for their own privileges and resist any change that would limit corporate excess… We have an opportunity to…fight for something that balances the playing field in the other direction.”

Warren noted that now is the perfect time to take up that fight. Obstruction by Senate Republicans has stalled the confirmation of many of the president’s judicial nominees over the years. More federal judgeships remained vacant during Obama’s first term than during President George W. Bush’s, and there are still more than 50 vacancies on the federal bench that need to be filled. “So it’s unsurprising that the president and a majority of the Senate gravitated to nominating corporate lawyers…that most conservative senators could not object to,” Warren said. In November, however, the Senate voted to put an end to GOP obstruction by ending the filibuster for judicial nominations. Now it only takes a simple majority of the Senate to confirm nominees to the federal bench. Theoretically, that means that Obama can nominate progressive candidates with experience representing the average American, and Democrats will be able to confirm those nominees without any Republican votes.

On Jan 16, the president nominated four lawyers with public interest backgrounds to fill district court vacancies in Illinois, Washington, Nevada, and Missouri. Two of those nominees have significant trial experience representing plaintiffs in corporate wrongdoing cases, one is a former public defender, and one comes from criminal defense.

But there are still roadblocks that may prevent the president from nominating progressive candidates. The GOP can still use something called the “blue-slip process” as a de facto filibuster on nominations. Here’s how: When the president is considering a potential judicial nomination, the senators from the state where the judge would serve are given a blue slip of paper. If both senators do not return their blue slips, the nominee is not allowed to move on to a vote in the Senate judiciary committee.

It is because of the blue-slip process, for example, that Obama recently nominated two candidates to serve on the federal bench in Georgia who raised the hackles of liberals: Georgia Court of Appeals Judge Michael Boggs and Atlanta attorney Mark Howard Cohen. Boggs voted to keep the Confederate battle emblem as a prominent part of Georgia’s state flag when he was a Georgia legislator in the early 2000s. Cohen helped defend Georgia’s voter ID law, which voting rights advocates say makes it harder for poor people and minorities to vote.