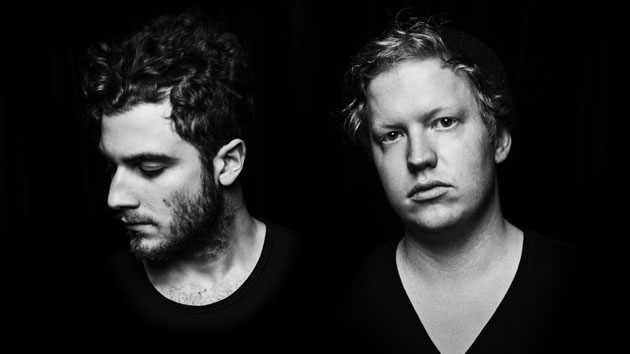 When I called up electronic-music producer Nicolas Jaar, the 24-year-old wunderkind was walking the streets of New York—briskly, judging by the pace of his breathing. He rapped ecstatic about his new project, Darkside, a collaboration with his old Brown classmate Dave Harrington. The two of them are touring now to showcase their debut album, Psychic—the shows in Paris and Berlin have already sold out months in advance.

Jaar says Psychic is the antithesis of his first album, Space is Only Noise, which he calls a “pure” and “ethereal” effort to “imbue a lot of love and honesty into my music that I felt was lacking around me.” So what happened after that idealistic and critically praised project that made him feel compelled to compose its antithesis?

“Snow is not always white,” he replies, deploying the first of several such metaphors he used during our conversation—New York had just been hit by snowstorm Hercules. “It’s really dirty in New York right now and it looks like shit.” That’s part of what Psychic is about: “The dark side of all these idealistic ideas is that they have to be sold,” he says. “And as much love as you try to put into something, it instantly goes into the chain of capitalism, and that’s just kind of gross. It’s kind of dirty. It’s the same thing as the snow, right?”

Listening to older interviews, one might get the impression that Jaar is brooding and pretentious. Raised in an intellectual, artistic home (his father is an architect and filmmaker, his mother a dancer), Nico spent six years in Santiago de Chile before moving back to his native New York. After graduating from Brown, where he wrote a comparative literature thesis on Faulkner and Derrida, he launched his own music label because he didn’t want other people to get their hands on his music. He once improvised a five hour jam at the MoMA PS1, under the vaulted geodesic dome. So when he picked up the phone, I was delighted by the lightness in his voice and his eagerness to talk.

It was, coincidentally, his birthday.

“I’m the first one to admit that I’ve said a lot of stupid shit,” Nico says, laughing. “I kind of overdid it,” he adds, regarding the influence his reading had on his music. “I had a moment where I was like, ‘No, fuck that.’ I want to be influenced by people. I don’t want to be so referential to other culture. I want to be referential to 20-year-old feelings.”

“I had a moment where I was like, ‘No, fuck that.’ I want to be influenced by people. I don’t want to be so referential to other culture.”

On a recent evening, as Darkside took the stage at the Fillmore, the historic San Francisco venue that Pink Floyd played 33 years before, I couldn’t contain myself. I’d struggled at work earlier that day, my hands trembling from two months of accumulated anticipation. Backlit in orange and yellow, Harrington carved psychedelic guitar solos into Nico’s lush electronic landscape, which buzzed and crunched with snare and cymbal strikes. When the bass finally came in, the room seemed drop to 300 feet below sea level, and my stomach jumped up into my throat—a bubble of glee not unlike the feeling you get from too much coffee. I closed my eyes, not by choice, but by the intractable, unaccountably swollen force gravity worked upon them. My knees went weak, and I couldn’t keep a shit-eating grin off my face. I kept throwing my elbow into my cousin’s shoulder to express my feelings.

“At first I thought, ‘Oh, you know, the dance club should be a contemplative place where we think about things blah-blah-blah,'” Nico told me. He laughed. “Then I went 180 degrees: It’s a place where we absolutely should forget, because it is shitty. Because everything is shitty.”

But wait, hadn’t he also said that the new album is all about “realism” and the idea that “sadly, no, things are not always so ethereal and pure and philosophical and all this bullshit”?

“Maybe the Trojan horse metaphor is the best one,” he suggested. The message is hidden in the music, and the Fillmore crowd, in full swoon, was “forgetting at the same time as remembering, in the most simultaneous way possible.”