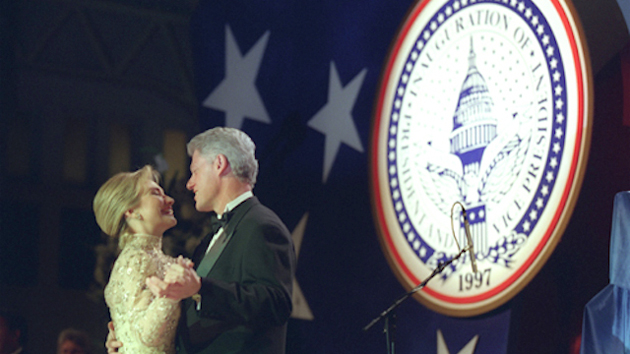 It’s back. The anti-Clinton craziness of the 1990s. It was inevitable that the right-wing nuttiness of those days would return once Hillary Clinton officially acknowledged her presidential ambitions, but the mere prospect of the former first lady turned senator turned secretary of state seeking the White House has led to a premature—or perhaps preemptive—revival of the old Clinton tales from two decades ago. Sen. Rand Paul (R-Ky.), a possible 2016 presidential candidate, kicked off the anti-Clinton nostalgia with a series of scolding references to Bill Clinton’s affair with White House intern Monica Lewinsky. Next GOP chairman Reince Priebus tweeted, “Remember all the #Clinton scandals…That’s not what America needs again.” And the Republican party mounted a petition drive (to beef up its email list) that asserted “scandals and controversies follow the Clintons.” Then Fox News upped the ante by booking Kathleen Willey, who has hinted (in a convoluted manner) that the Clintons were involved in the deaths of her husband and Vince Foster, a Clinton White House aide who committed suicide during the first year of Bill Clinton’s presidency. Willey has also claimed that Bill Clinton groped her in the White House and suggested that the Clintons had her cats killed.

For those who lived through the conservative get-Clinton madness that culminated in Clinton’s impeachment (and acquittal), this may seem like a bad acid flashback. Or a truly cheesy sequel. During the Clinton years, there were plenty of reasons to be critical of the first couple: Bill’s calculating centrism, Hill’s byzantine health care proposal that set back the cause of health care reform, Clinton campaign finance abuses, his workplace affair with Monica Lewinsky, scandalous pardons, and more. But conservative forces went far beyond the boundaries of reality in their ceaseless efforts to destroy the Clintons. During the 1992 campaign, some right-wingers whispered that Bill Clinton was a Manchurian candidate who had been brainwashed by the Russians when he was a Rhodes scholar at Oxford and took a student trip to Moscow. Others circulated fliers—this was before the internet hit big—claiming he had fathered the son of an African American prostitute. And there were claims that the Clintons were connected to a major drug-running operation that had been based in Arkansas and tied to a series of murders. Yes, murders. Dozens of murders.

As a draft-dodging, pot-smoking (sure, he inhaled), former long-hair McGovernik, Bill Clinton represented a side in the American political cultural civil war that had raged since the early 1960s, and many on the right could not accept that a citizen of that other America could become the leader of the land. Their disbelief and outrage led to insane outbursts of absurd accusations—and never-ending investigations (on and off Capitol Hill) that sought to uncover the darkest secrets of Bill and Hillary Clinton. This anti-Clinton crusade had two components: what might be called the official conspiracies that were probed by congressional gumshoes and independent counsels, and those that can be considered the outer-limits conspiracies. There was overlap (the Vince Foster suicide conspiracy, for example). But it all blurred into one long swirl that ended up discrediting much of the right and spurring an anti-anti-Clinton backlash that helped Bill Clinton become one of the most popular and successful former presidents and Hillary Clinton become a US senator.

So as once-dormant Clinton derangement syndrome reappears, it might be useful to sort out the swirl. Joe Conason, who cowrote with Arkansas journalist Gene Lyons The Hunting of the President: The Ten-Year Campaign to Destroy Bill and Hillary Clinton, offers a short breakdown of the official Clinton conspiracies:

Whitewater: Kenneth Starr spent roughly millions of dollars trying to find evidence of chicanery in a land deal that lost money for the Clintons—and his probe ended up demonstrating their innocence, like several earlier investigations. Having whispered to gullible journalists that he was about to indict Hillary in December 1996, Starr instead abruptly resigned as independent counsel in February 1997, knowing he had no case against her…

Travelgate: Feverish coverage of Hillary Clinton’s firing of several White House employees who handled press travel arrangements neglected some salient facts—such as the suspicious absence of accounting records for millions of dollars expended by the White House Travel Office, the Travel Office director’s offer to plead guilty to embezzlement, and evidence that he had accepted lavish gifts from an air charter company. The First Lady and her staff didn’t handle the controversy skillfully, but she had plenty of reason to suspect chicanery. And again, exhaustive investigation found no intentional wrongdoing by her.

Filegate: Sensational accusations that Hillary Clinton had ordered up FBI background files to target political opponents soon became a Republican and media obsession, with respectable figures warning that Filegate would be the Clintons’ Watergate. “Where’s the outrage?” cried Bob Dole, the 1996 Republican presidential nominee. Starr investigated the matter and found no evidence of wrongdoing. Finally, in 2010, a Reagan-appointed federal judge mockingly dismissed a civil lawsuit based on the allegations, saying “there’s no there there.”

As for the out-there conspiracies, perhaps the best representation of this genre was a documentary called The Clinton Chronicles. The 83-minute-long movie that was released in 1994 alleged that Bill Clinton had an extensive “criminal background” when he was elected president and that this “information” had been kept from voters. (That is, he had been elected on false pretenses.) The Bill Clinton of this movie was a sort of kingpin who had engaged in a multitude of corrupt activities while attorney general and governor in Arkansas; this included involvement in drug-money laundering. Of course, all this corruption continued in the White House. The film—overflowing with demonstrably false accusations—climaxed with the contention that Foster was murdered and that the White House mounted a cover-up to keep this a secret (and to keep a purportedly hidden relationship between Foster and Hillary under wraps). And it wasn’t just Foster. The film noted that others with information about Clinton’s crimes had died mysteriously. A plane crash. A suicide. People were afraid to tell the truth about the Clintons. The film concluded with this warning: “If any additional harm comes to anyone connected with this film or their families, the people of America will hold Bill Clinton personally responsible.” An earlier version of the documentary, Circle of Power, had listed a number of suicides, accidental deaths, and unsolved murders and linked them to the Clintons.

What was most notable about both films was their No. 1 sponsor: Jerry Falwell, a television evangelist and head of the Moral Majority. In the 1990s, he was one of the most prominent leaders of the religious right. And on his weekly television show, he pitched these videos. A fellow who routinely hobnobbed with Republican presidents and politicians was explicitly endorsing the view that the current occupant of the White House was a maniacal and corrupt evildoer who had resorted to murder (on multiple occasions!) to obtain and preserve his power. And you could have proof of this, Falwell noted, for only $40 plus $3 for shipping.

Falwell was not alone. As Conason and Lyons noted in The Hunting of the President, other prominent conservatives were pushing the Clinton-as-killer meme (though no one called it a meme back then). The Council for National Policy, a secretive outfit that included the leadership of the conservative movement, ordered copies of the film for its members. GOP Rep. Dan Burton (R-Ind.), who while pursuing the Foster suicide theory had a watermelon shot in his backyard, invited the narrator of the film, an Arkansan named Larry Nichols, to meet with House Republicans. Nichols became a fixture on right-wing talk radio. William Dannemeyer, a former House GOPer who appears at the end of The Clinton Chronicles to raise money for further investigation, sent members of Congress a letter requesting they probe the mysterious deaths related to Clinton. The conservative editorialists at the Wall Street Journal half-defended the film. Criticizing the documentary for being loaded with unproven charges, they noted, “the Falwell tape and the controversy around it get at something important about the swirl of Arkansas rumors and the dilemma it presents a press that tries to be responsible.” In other words, Clinton was no murderer, but there was value to presenting the overarching, rumors-fueled case that he was sleazy schemer.

How does being accused of murdering political foes (and friends) to cover up criminal deeds (and untoward affairs) compare to being accused of being a foreign-born secret Muslim and covert socialist with plans to destroy America? Political consumers of today who are too young to have experienced the visceral and extreme Clinton hatred of the 1990s might find it tough to imagine the excesses of that era, but they would recognize parallels with the anti-Obama hate machine. Then and now, Republicans in power whipped up investigations (Benghazi!) to satisfy their their angry and resentful base voters and knowingly associated with (and validated) those hurling even more outlandish accusations about a commander-in-chief much detested on the right. To an extent, the Clinton smearers paved the way for the Obama bashers, and some conservative agitators have dutifully served in both camps. Joseph Farah, a leading birther, was a champion of Foster conspiracy theories. In 2007, Fox News host Sean Hannity hosted a special episode on the “mysterious death” of Foster, hinting that the Clintons might have pulled off “a massive cover-up.” Rush Limbaugh, too, has in the past suggested Hillary had Foster killed.

The number of false charges hurled in the 1990s at the Clintons could fill a book. (See Conason and Lyons’.) Like ordnance left over after a war, this ammunition remains ready to be used by conservatives who recoil at the thought of another Clinton in the White House. It doesn’t matter that these bombs are duds. As Fox News showed this week, the Clinton antagonists of years ago and of today will reach for whatever ammo they can find to recreate the impression there was a swirl of Clinton corruption and push a politically useful mantra: Don’t stop thinking about the past.