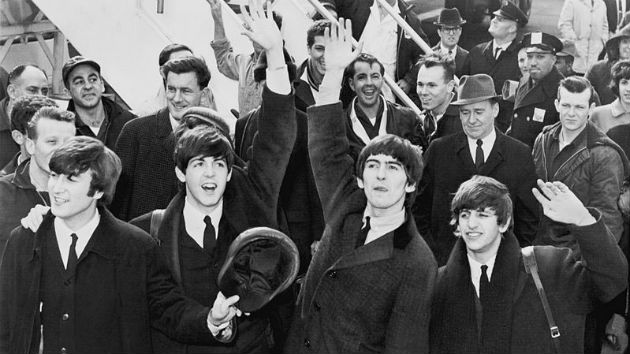 February 9 marks the 50th anniversary of The Beatles‘ historic performance on The Ed Sullivan Show on CBS. It was one of the opening salvos of the British Invasion of the mid-1960s, and the broadcast drew 73 million viewers. It is consistently hailed as one of the most influential and biggest (if not the biggest ever) televised moments for rock n’ roll and popular music.

“The Beatles are delightful,” Sullivan said shortly after the performance. “They are the nicest boys I’ve ever met.”

You can watch their 1964 Ed Sullivan performance of “I Want to Hold Your Hand” (along with some other gigs) below, via Rolling Stone:

Many tributes and commemorative packages have been prepared for the anniversary. On Sunday, CBS will air a special all-star salute, featuring Stevie Wonder, Gary Clark, Jr., Katy Perry, and ex-Beatles Paul McCartney and Ringo Starr, among others. The Ed Sullivan appearance was just one of many indicators of The Beatles’ immense popularity and influence. Concert promoters, cultural observers, and screaming teenage girls weren’t the only ones who understood this—British politicians did, too, and they weren’t shy about trying to exploit Beatlemania for electoral gain.

In March 1964, the United Kingdom was gearing up for a general election, to be held in mid-October—and the campaign trail was littered with references to the Beatles. “Paul McCartney, George Harrison, John Lennon, and Ringo Starr…have become valuable election property,” read the photo caption on a “Window in London” column in The Age titled, “The Beatles Enter U.K. Politics.” Here’s an excerpt from the article:

You don’t need to be the Delphic Oracle to foretell that a generation election is in the offing in this part of the world…Nor has the prevailing hysteria of Beatlism escaped being drawn into the political controversy.

As one acute observer remarked while the Beatles were just another show business team, no one in authority bothered about them, but…[after they] had been approved by America, they became an electorally valuable property.

Conservative candidates were officially advised to mention them whenever possible in their speeches.

Not to be outdone, the Minister in charge of the Government’s information services…told a meeting of young Conservatives that the Beatles heralded a cultural movement among the young which might become part of the history of our time, and a lot more to the same effect.

As for the Beatles themselves, they couldn’t have cared less about British politics at the time. Two days before the general election, while the band was on tour in northern England, they announced that they would not vote. “We don’t care a lot about politics, so we never bothered to fix a postal vote,” McCartney said.

“We’ve been away from Liverpool so long that we’ve forgotten which constituency we’re in,” Lennon added. “It’s a lot of rubbish, anyway.”

Anyway, Wilson won and became prime minister—and decided to nominate the Beatles to become members of the Most Excellent Order of the British Empire, which the four members were later awarded by the queen in 1965 (the honor was controversial, as the honor was typically given to, say, war heroes):

Whatever their political apathy in 1964 and 1965, members of The Beatles indeed became more political in subsequent years. And, for what it’s worth, their music inspired young dissidents and rebels in the Soviet Union, contributing to a cultural revolution that undermined totalitarianism and gave birth to a whole generation of Beatles-wannabe rock bands in the USSR.