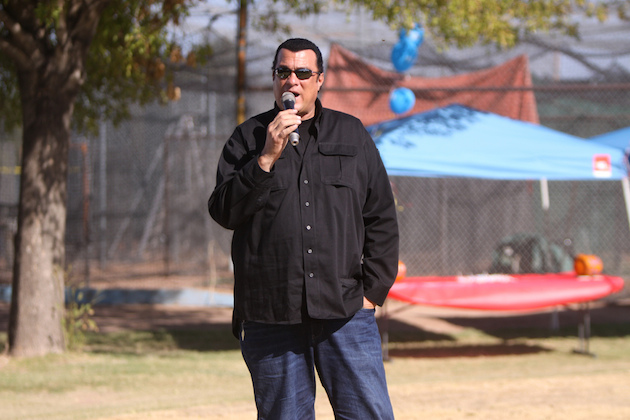 Last Friday Phoenix TV station ABC15 published an interview with Seagal ahead of the new season of his reality TV show, Steven Seagal: Lawman. The first two seasons of the show, aired on A&E, featured Seagal working alongside police units in the suburbs of New Orleans. But for the latest season, now airing on Reelz, Seagal has transferred to Arizona, where he is a deputy for Maricopa County Sheriff Joe Arpaio, one of the country’s leading anti-immigrant zealots. That could springboard Seagal, a Republican, toward a career in politics.

“Joe Arpaio and I were talking about me running for governor in Arizona,” Seagal said in the interview, “which was kind of a joke, but I suppose I would remotely consider it, but I probably would have a lot more other responsibilities.”

When ABC15 asked Seagal what topic he viewed as the most pressing political problem for the country he turned to one of Arpaio’s favorite topics: open borders. “I think that this is a tremendous oversight by the current administration,” he said. “I think that it’s a crime.”

It would probably be for the best of Arizona citizens if Seagal ignores the advice of his buddy Arpaio. The action star has joined one of the most controversial law offices in the country by teaming up with Arpaio. The sheriff has been accused of blatant racism in his police tactics as he hunts down undocumented immigrants. In 2011, the US Justice Department issued a report that said Arpaio oversaw an office with “a pervasive culture of discriminatory bias against Latinos,” one where Latinos are singularly the aim of investigations and then mistreated in custody. Arpaio rounds up undocumented immigrants with such zeal that, instead of a normal jail, he houses arrestees in Tent City. Federal judges have stepped in and now require an independent monitor to keep tabs on Arpaio, lest racial profiling continue. His office misspent nearly $100 million. Not exactly an ideal political mentor for a martial-arts-expert-cum-governor.

What’s Seagal think of all those accusations against Arpaio? “Is Joe Arpaio racist? No he’s not,” he said. “I’m not going to say I think he’s not. He’s not. He doesn’t care what nationality you are, he cares if you’re a criminal, and that’s the way that I look at this whole thing.”

Here’s the video of the interview: