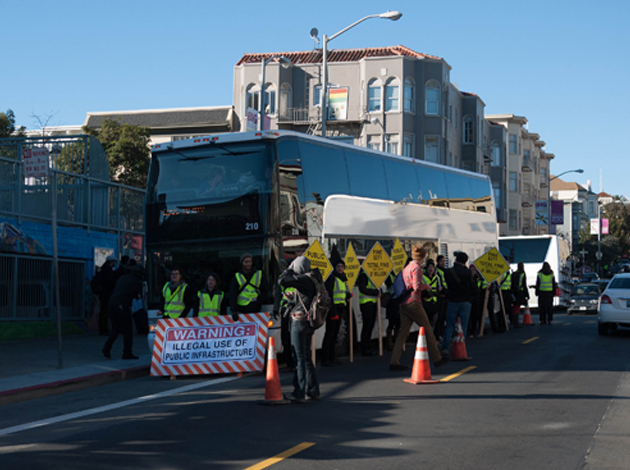 On two separate days last month, buses carrying employees of major tech companies were blockaded by Bay Area activists. First, a bus bound for Google’s headquarters was stopped at 24th & Valencia in the Mission district of San Francisco. Activists from the anti-gentrification and eviction group Heart of the City boarded the bus and held a sign in front of it which read Warning: Illegal Use of Public Infrastructure. Meanwhile, union organizer Max Alper posed as a Google employee and shouted at the protestors (his real identity was later revealed.

The bus was one of hundreds in the San Francisco Bay Area that provide an estimated 35,000 boardings per day for private companies, who use the city’s MUNI bus stations as pick up and drop off points, free of charge.

A few weeks later, another round of blockades occurred throughout San Francisco and Oakland. Buses bound for Apple, in addition to buses bound for Google, were blockaded. This time signs read “Eviction Free San Francisco“, “Fuck Off Google” and so on. A Google bus window in Oakland was shattered during its blockade.

So yesterday, when news broke that San Francisco Mayor Ed Lee was announcing a new series of proposed regulations for these tech buses, it appeared to be a win for area activists and organizers. Among the requirements for the mayor’s plan: shuttle providers would pay a daily fee based on the number of stops they make, plus they would have to yield to Muni buses and avoid steep and narrow streets.

But SFMTA spokesman Paul Rose told Mother Jones the recent blockades did not have any effect on the timing of the mayor’s announcement. And in fact, he says data gathering for the new policy began as early as 2011.

Plus, activists are not likely to find comfort in the mayor’s financial estimates for the pilot program. Due to California’s 1996 ballot measure Proposition 218, the new proposed fees are limited to the cost of providing the new policy. So Mayor Lee expects the permit fees to generate about $1.5 million over the first 18 months, and the new fees will reportedly cost shuttle operators only $1 per day per stop. Activists were demanding the industry pay $271 for each “illegal usage of a bus zone“, which they estimated would total around $1 billion in fines.

The mayor’s proposal must be approved by the San Francisco Municipal Transportation Agency’s board of directors, which will vote on the proposal January 21. Final plans would be approved by public hearing in late Spring.