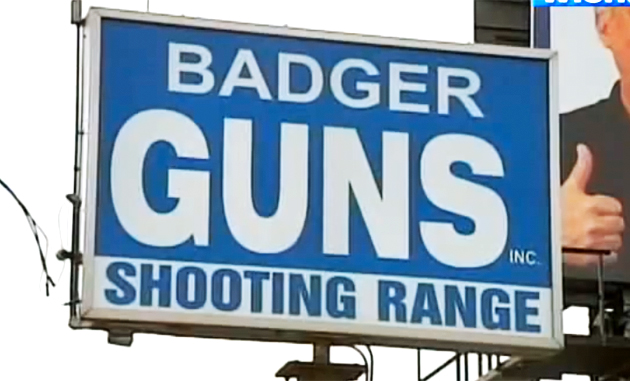 For an administration that has vowed to end the scourge of gun violence, this is the last place you’d expect to find the Obama Justice Department: coming to the aid of one of the nation’s most notorious gun dealers. But this is precisely what’s happening in Wisconsin, where the Obama administration, in defending a federal statute, has wound up on the side of a gun shop that is being sued by police officers injured by firearms illegally purchased from the store.

The story starts in 1987, when Badger Guns & Ammo opened its doors in West Milwaukee and quickly established itself as a major source of guns linked to crimes across the nation. (The store changed its name to Badger Outdoors in 1999.) In its first eight years of doing business, the store sold at least 804 guns traced to crimes, according to one of the lawsuits the gun dealer is facing. Federal data revealed that in 1999 Badger sold more guns that were used in crimes than any other dealer in the country. After a bout of bad press, Badger briefly stopped selling cheap handguns, known as Saturday Night Specials. When it did, Milwaukee saw “a 44% decrease in the flow of all new, trafficked guns to criminals,” according to a study by Johns Hopkins researchers. 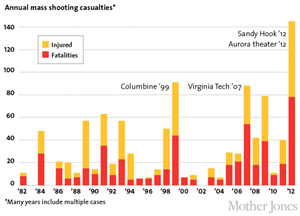 A Special Report on the Rise of Mass Shootings in America

The store’s moratorium on cheap handguns lasted about a year. By 2005, Badger was back to peddling more crime-linked guns than any other dealer in the nation.

But its longtime business practices persisted. Between 2007 and 2009, Badger sold 62 percent of crime-linked guns recovered in Milwaukee, according to federal data crunched by the Milwaukee Journal Sentinel; 21 of the 27 straw buyers—people who illegally purchase firearms for those who can’t pass background checks—prosecuted in Milwaukee between 2004 and 2009 bought their guns from Badger.

This flood of firearms into Milwaukee was linked to serious crime; between 2007 and 2009, six city police officers were shot. Badger guns were used in each of those incidents. The Milwaukee police chief called the store a “cancerous lesion on Milwaukee right now.” The police shootings prompted a crackdown on Badger. In 2010, Milwaukee cops started stopping people outside the store and found that 1 in 5 was a felon banned from possessing weapons. In late 2011, the ATF finally revoked Badger’s license. In July 2012, another of Allan’s sons opened a gun store in the same location called Brew City Shooters Supply.

In 2010, the Brady Center to Prevent Gun Violence brought two lawsuits against Badger on behalf of four cops injured by guns purchased at Badger. Thanks to Congress, succeeding in a lawsuit against a gun dealer or manufacturer is extremely difficult. That’s because in 2005, then-Sen. Larry Craig (R-Idaho), a National Rifle Association board member, introduced and helped pass the Protection of Lawful Commerce in Arms Act (PLCAA). The law prohibits victims of crime from suing the manufacturer of a gun that injured them, or the dealer who sold it.

The law has a couple of exceptions, including one that allows victims to sue if the gun that injured them was sold illegally, such as to a straw buyer. Such was the case in the shootings of Milwaukee cops Bryan Norberg and Graham Kunisch, the plaintiffs in one of the suits filed by the Brady Center in Wisconsin.

They were shot in 2009 by an 18-year-old mentally ill teenager named Julius Burton, who paid a drug user $40 to buy him a handgun at Badger in 2009. In the store, Burton even pointed out the model he wanted but couldn’t buy because he wasn’t old enough. On the federal background check form, the buyer checked a box saying he wasn’t the actual purchaser of the gun—an outright admission of an illegal straw purchase. According to the Brady Center’s complaint, a store employee helpfully assisted him in changing the answer on the form and closed the sale. This straw purchase was captured on video. A few weeks after the sale, Burton shot Kunisch and Norberg in the head after they confronted him for riding his bike on the sidewalk. (Both survived but with serious injuries; one lost an eye.)

The Brady lawyers and their co-counsel have argued that because of the straw purchase, the case should not be blocked by the PLCAA. Badger, which has not disputed the facts of the straw purchase, contends that the suit should be dismissed based on that law. A Wisconsin judge is expected to rule on the motion this week. (A lawyer for Badger did not respond to a request for comment.)

In its lawsuit, Brady maintains that the PLCAA is unconstitutional because it prevents an entire class of injured citizens from accessing the legal system, without giving them any alternative remedy. (Other federal laws also limit lawsuits by injured people, but they provide another way of compensating people for their losses, such as the National Vaccine Injury Compensation Act.) This where the Obama administration entered the picture. In the face of a challenge to the PLCAA, the Justice Department intervened, supporting Badger’s contention that the law is constitutional.

This puts Obama—who has come out firmly in favor of measures to curb gun violence—in an unusual situation. As a senator, he voted against the PLCAA. As president, he nominated Caitlin Halligan, the former New York solicitor general to the DC Circuit court of appeals; she was twice filibustered largely because of her work asserting that gun manufacturers could be sued and held liable for injuries caused by their products—the very type of lawsuits the PLCAA was created to kill off. Meanwhile, Democrats in Congress last year introduced legislation to overturn the PLCAA.

But the decision to intervene in a civil case is also at the discretion of the agency. “They don’t have to use their resources to get involved,” says Jon Lowy, the Brady lawyer suing Badger. He points to the Justice Department’s refusal to defend the Defense of Marriage Act, the law Congress passed to prevent the federal government from recognizing same-sex marriages. In that instance, Obama said he believed the statute was unconstitutional.

But it’s clear from the Justice Department’s brief in the Badger cases that the Obama administration believes enacting the PLCAA was well within Congress’ power.