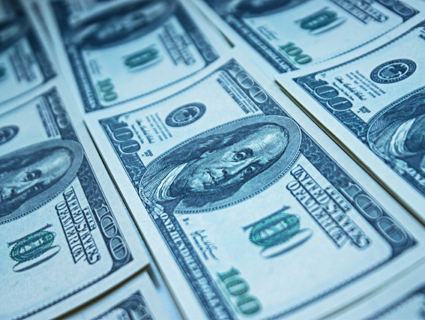 One of the hard truths about climate change solutions—whether they’re solar panels, protective seawalls, or carbon-sucking golf balls—is that somebody has to pay for them. This week the UN’s climate chief, Christiana Figueres, told Climate Desk that global investment in clean energy technologies needs to reach $1 trillion per year by 2030 (a little less than the GDP of South Korea), roughly tripling where we’re at now, to keep global warming within the limit agreed on by international climate negotiators.

So when more than 500 investors who hold the strings on the world’s biggest purses—the heads of investment banks, insurance companies, pension funds, international development banks—descended on the UN headquaters in New York yesterday for a high-powered summit hosted by the sustainable business* nonprofit Ceres, you’d hope they would be ponying up for climate solutions.

There’s just one problem: Investment is on the decline for the second year in a row, according to new statistics released yesterday by Bloomberg New Energy Finance. In 2013, investors worldwide put $254 billion into clean energy technology, 20 percent below 2011’s record high.

“The figures this year are not great,” BNEF CEO Michael Liebreich told the group, which together represent roughly $20 trillion in assets. “But we are by no means in as bad a place as we could be.”

“There are serious consequences to getting this wrong.” -Anne Simpson

That might sound like damning with faint praise, but in fact analysts here insisted the numbers mask a more optimistic story of growing concern about climate change on Wall Street. One important factor behind the investment decline, Liebreich said, is the falling cost of renewable energy installations, meaning investors get more bang for fewer bucks. Just in the last 18 months, the cost of a typical solar panel system dropped 45 percent; from 2012 through 2013, the total number of installed systems worldwide grew 20 percent.

In other words, the volume of renewables on the grid is growing even though less is being spent on them. And overall, a range of green money analysts at the conference insisted that Google’s $3.2 billion purchase this week of energy efficiency startup Nest is just the latest sign that mainstream investors are beginning to see moneymaking opportunities in climate protection.

So how are investors going green? Bank of America’s Head of Global Capital Markets, Lisa Carnoy, told Climate Desk the biggest shift in 2014 is likely to be in the market for so-called “green bonds.” Companies and governments sell bonds as a way to quickly raise cash. The money they get from issuing a bond to a bank or other investor gets put into a project, which generates profit the company uses to pay back the investor (with interest, of course). Green bonds are those that are dedicated exclusively to funding climate-friendly projects: Renewable energy, energy efficiency, etc. As of last November, clean energy projects worldwide had issued $7 billion in such bonds, according to a report Ceres released yesterday, which projects the market for clean energy bonds to grow to $18-40 billion annually by 2020, a noticeable chip out of the $1 trillion goal.

“This is the simplest, cleanest, most easily understood” way for investors to fight climate change, Carnoy said, “and this is the one that can take off first.”

Bonds are typically reserved for stable, mature industries (railroad and water infrastructure, for example), that are guaranteed to turn around a return for whoever buys them. So if Carnoy is right and more investors begin to snap up green bonds as a reliable way to generate income, it will send a strong signal to policymakers that clean tech isn’t just a fringe sector for eco wingnuts but a robust, growing industry, according to HSBC head climate analyst Nick Robins.

“So that’s a very good signal for the clean economy,” Robins said.

The other trend to watch in 2014 is a growing awareness of the threat of “stranded” assets. Investments and companies whose value is based on holdings of fossil fuel reserves could find the rug pulled out from under them if those reserves become worthless following a drop in demand as renewables become more widespread and more countries adopt a price on carbon. There could be as much as $7 trillion worth of fossil fuels that will need to stay in the ground; the Ceres report estimates that stranded assets could account for 10 percent of overall investor portfolio risk over the next 20 years. That could be bad news for, say, pension funds, that rely on steady investment returns to cut checks to retired government employees. Anne Simpson, a senior director of the California state pension fund, said that 70 cents of every dollar in the fund comes from investment returns.

So, she said, “there are serious consequences to getting this wrong.”

*An earlier version of this story incorrectly identified Ceres as a “green banking nonprofit”.