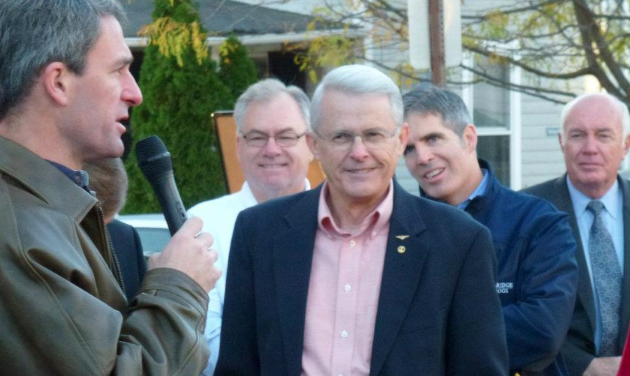 After taking a drubbing in last year’s state elections, Virginia Republicans are debating whether their party has come to be defined by its extremists. But in a congressional district in Northern Virginia, one of the state’s main instigators of culture warfare, state Sen. Richard H. “Dick” Black, is running in the Republican primary to replace longtime GOP moderate Rep. Frank Wolf, who is retiring. And he’s guaranteed to ignite wedge-issue passion. Exhibit A: As a state legislator, Black opposed making spousal rape a crime, citing the impossibility of convicting a husband accused of raping his wife “when they’re living together, sleeping in the same bed, she’s in a nightie, and so forth.”

In 1998, Black was elected a delegate to the Virginia House. He sparked multiple battles over social issues until he was voted out of office in 2005. But Black wasn’t done. In 2011, after moving several times around Northern Virginia in search of a friendly district, Black was voted back into the Legislature, this time to the state Senate.

In the GOP nomination fight to replace Wolf, Black, who commands substantial support among the conservative grassroots, would have a strong chance to beat his moderate opponents if the party chooses to nominate candidates through a convention, rather than a primary. (Black sometimes raised hundreds of thousands of dollars for his House races. Tea partiers and social conservatives have dominated Virginia Republicans’ nominating contests in recent years.) The party will decide between the two on January 23. Republicans have held the seat Black is seeking for 14 years, but the congressional district voted for Mitt Romney by only a slim margin in 2012. A not-so-conservative Republican nominee may be key to keeping the seat in Republican hands. Since returning to the Legislature in 2011, Black has preferred to present himself as a fiscal conservative, not a fire-breathing social conservative. But he may still have to defend his years as Virginia’s foremost far-right warrior.

Black entered politics in the late 1990s after retiring as a military prosecutor. He spoke frequently to media outlets about sexual assault in the military, and called military rape “as predictable as human nature.” “Think of yourself at 25,” Black told a newspaper in 1996. “Wouldn’t you love to have a group of 19-year-old girls under your control, day in, day out?”

Still, Black used the controversy to vault himself into the Virginia general assembly. From 1998 to 2006, when a Democratic challenger unseated him, although he was rarely successful in passing legislation, Black never missed an opportunity to be at the front lines of every social battle in the statehouse.

The 1999 massacre at Columbine High School, for example, inspired Black to suggest legislation requiring Virginia students to address their teachers as “Ma’am,” “Sir,” “Mr.,” “Ms.,” or “Mrs.,” because, Black explained, “The counterculture revolution of the ’70s took the war into the classroom. Before that time, public schools were a model of decorum, and then we began this thing we’ve seen play out at Columbine.”

In 2003, Black led a fight to prevent a statue of Abraham Lincoln seated with his son Tad from gracing the grounds of the Tredegar Iron Works, a Civil War-era foundry that supplied the Confederate army with cannons. “Putting a statue to [Lincoln] there is sort of like putting the Confederate flag at the Lincoln Memorial,” Black told the Washington Post, adding that the Lincoln Memorial in Washington, DC ought to be enough. Black even asked the Virginia Attorney General, Republican Jerry Kilgore, to investigate whether any state laws prohibited the National Park Service, which leases Tredegar, from erecting the statue. (None did.)

In 2002, as the Virginia general assembly repealed a ban on spousal rape prosecution, Black wondered if it was really possible for a husband to rape his wife. He said changing the law could cause a man “enormous fear of the damage to his reputation” if his wife ever filed a false rape claim. Last month, after the Weekly Standard highlighted Black’s remarks on spousal rape, a member of Black’s congressional campaign staff emailed the Loudoun Progress to say, “Black was not taking a position for or against marital rape.”*

As a member of the general assembly, Black introduced the legislation—later copied by then-state Sen. Ken Cuccinelli, the GOP’s 2014 gubernatorial candidate—that would allow Virginians to purchase “Choose Life” license plates, with funds going to Virginia crisis pregnancy centers. Since the plates became available in 2009, NARAL Pro-Choice Virginia calculates they have raised $223,000 for these facilities, where staff have been found to tell women, falsely, that abortion increases their chance of breast cancer and infertility.

For two years in a row, Black introduced legislation requiring women younger than 18 to provide a notarized note from a parent before having an abortion. To justify the bill, he said abortion was a greater evil than segregation or slavery. In 2005, according to the Richmond Times Dispatch, he promoted a bill that would have required abortion providers to tell women that a fetus being aborted 20 weeks after conception may be able to feel pain, a medically unsupported claim. Black sent senators plastic figures of fetuses with a letter asking, “Would you kill this child?” as a Senate committee prepared to vote on the bill.

Black was at his most virulent when targeting Virginia’s same-sex couples. He championed legislation to ban same-sex couples from adopting children, claiming that gay men and women are more prone to violence, alcoholism, and suicide. When it became clear the bill would fail, according to a 2005 Washington Post article, he amended it to require adoption agents to investigate whether the prospective parents were “known to engage in current voluntary homosexual activity.”

In 2003, Black tried to pass legislation preventing same-sex couples to apply for low-interest home loans from the Virginia Housing and Development Authority. The current policy, he explained, “subsidize[s] sodomy and adultery.” Black even, in 2005, urged his constituents to picket a local high school that had staged a student’s one-act play about a gay high school football player. Portraying same-sex relationships in “a cute or favorable light,” he contended, put children at risk of contracting HIV. “If I’m the last person on the face of this Earth to vote against legalizing sodomy,” Black once said, “I’ll do it.”

Black’s campaign and state Senate office did not respond to repeated requests for comment.

This article has been updated to include the Black campaign’s December explanation of his spousal rape remarks.

Black’s campaign and state senate office did not respond to multiple requests for comment for this article. After this article was published, Amy Louder, an aide to Black, sent an email to a Mother Jones reader, saying Black “voted in favor of HB488, the Spousal Rape Prevention bill…To claim he’s in favor of spousal rape is absurd.”

HB 488 was an omnibus domestic violence prevention act enacted by the Virginia General Assembly in 2002. It does not appear to have been titled the Spousal Rape Prevention bill.

“No person shall be found guilty under this subsection unless, at the time of the alleged offense, the spouses were living separate and apart, or the defendant caused bodily injury to the spouse by the use of force or violence.”

In his comments that day, Black said:

“I don’t know how on earth you could validly get a conviction in a husband-wife rape when they’re living together, sleeping in the same bed, she’s in a nightie and so forth. There’s no injury, there’s no separation, or anything.”

The Virginia legislature’s website does not record individual members’ votes for this amendment, which the House rejected. In an email to Mother Jones, Louder would not say how Black voted on that amendment. The vote for the omnibus bill took place the next day.

In a December email to the Loudoun Progressive, a Black campaign aide said that regarding spousal rape, Black “was worried about the weakening of the burden of proof and had fears about innocent people being prosecuted. When those fears were assuaged, he then voted for the bill.”