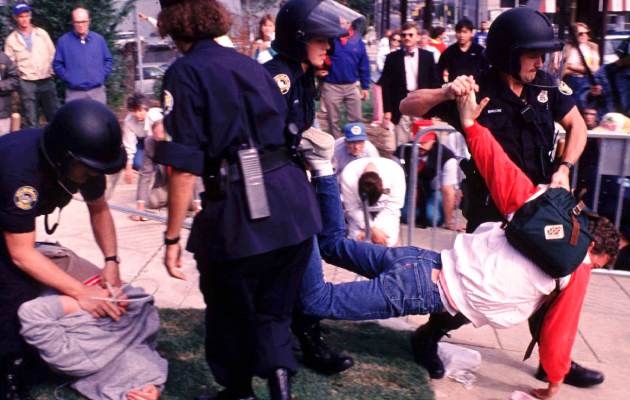 A 1970s abortion protest, or the wave of the future?Robin Nelson/ZUMA

Liam Lowney does not talk about his sister, Shannon Elizabeth Lowney, without first gushing about her personality. She was bright and intelligent, a talented student and passionate musician with an “infectious smile,” he says. Only then will he discuss how she died: On December 30, 1994, as she worked the front desk at a Planned Parenthood clinic in Brookline, Massachusetts, a man named John C. Salvi entered and riddled her face with bullets.

On Wednesday, the Supreme Court will hear arguments in McCullen v. Coakley, a case in which anti-abortion-rights activists are challenging a Massachusetts law—passed partially in response to Lowney’s murder—that bans protests within 35 feet of an entrance to an abortion clinic. The petitioners claim the law violates their First Amendment rights. Eleanor McCullen, the lead challenger, is a septuagenarian grandmother whose refrigerator is barely visible beneath all the baby photos that she says were sent to her by women she encountered outside clinics and persuaded not to proceed with an abortion.

But Massachusetts’s buffer zone was not created in response to peaceful protests like those staged by McCullen. It was written in response to people like Salvi and protesters who use physical force to block women from obtaining abortions. Even after Republican Gov. Paul Cellucci signed a modest buffer zone into law in 2000, Massachusetts’s abortion clinics were swamped by protesters who physically barred women from entering. Yet lawyers for McCullen aren’t merely asking the court to strike down the extended 35-foot buffer zone, which Massachusetts established in 2007; they are asking the justices to ban all buffer zones outside abortion clinics.

Attorneys for the ACLU, which filed a friend-of-the-court brief in the case, concede that buffer zones do impinge on free speech, but they contend this is necessary to protect the competing constitutional right to obtain an abortion. To prove that point, the ACLU compiled police reports, oral testimonies, and written statements that describe how difficult it had become in Massachusetts to obtain or provide an abortion before the 35-foot buffer zone was implemented in 2007. The following excerpts offer a glimpse of the pandemonium that often reigned outside Massachusetts’s clinics before this law was enacted.

Gail Kaplan, a patient escort at the Boston Planned Parenthood clinic, speaking to the Massachusetts Legislature in 2007:

The protestors are moving closer and closer to the main door. They scream and block the way for the patients to get into the clinic. We fill out police reports almost every week regarding the way they encroach upon the door, but nothing has changed…They’re getting so close that patients are terrified to even walk into the clinic.

I have often been spit upon while escorting a patient into the clinic since they got so close to me while shouting their protests…When it rains, they bring these huge umbrellas and try to knock the escorts out of the way.

Michael T. Baniukiewicz, head of security for Planned Parenthood facilities in Massachusetts, in a sworn 2007 affidavit:

“Bad enough I was scared coming here, afraid I might get shot.”

They carried clipboards and had patients write on clipboards. These patients appeared to be frightened and upset when they learned that [they] were not police. Patients informed me that they had provided their names, addresses, and telephone numbers.

They place four of their protesters, especially on Saturdays, right on the curbstone of the buffer zone, so when people try to park there to let a patient out, they can’t get out.

The safety issue is scary…[The protesters] will look to start a fight, and obviously that’s keeping people from entering the building.

Vanessa B. in a harassment incident report filed with Boston police, December 5, 1998:

One person was carrying a fake baby doll and was yelling, “It’s alive. You see what you’re doing!” Another person had a tape recorder and was playing a tape with a child crying, “Mommy, Mommy”…Bad enough I was scared coming here, afraid I might get shot…They made me scared, but they are not running me away because I have rights too.

Karen Caponi, a nurse practitioner and director of the Worcester Planned Parenthood clinic, speaking to the Massachusetts state Legislature in 1999:

One of our of physicians has been threatened with “I’m watching you” and “You won’t be smiling for long.”

Filomena Katia Natale, a former nurse for the Boston Planned Parenthood clinic, speaking to the Massachusetts Legislature in 1999:

As I was on my way to work, several protesters blocked my entrance into the parking garage at the clinic. One protester stood between my car and the card reader so that I could not swipe my pass to open the garage door. As I opened my window to ask the escorts to help me, the protesters moved very close to my car and began screaming at me and making comments about my nationality.

Melissa Conroy, a patient advocate at the Four Women Clinic in Attleboro, writing to the Massachusetts Legislature in 2007:

Patients have reported feeling too intimidated by the pacing protesters to enter the property, and turning back.

Occasionally, anti-abortion-rights protesters attracted and clashed with pro-abortion-rights activists, making the situation even worse, as William B. Evans, a Boston police captain, says in a sworn 2007 affidavit:

“Even more egregious are the protesters who dress as Boston Police Department officers.”

On approximately ten Saturdays in late 2006 and 2007, a pro-choice group that we called the “Pink Group” was particularly disruptive. They would go into the 18-foot buffer zone and they would push, shove, and step on other people’s feet in order to get a good position. When this pro-abortion group was present, the combined presence of the pro- and anti-abortion protestors within the 18-foot zone around the front entrance would effectively block the door.

Dianne Luby, president and CEO of the Planned Parenthood League of Massachusetts, speaking to the Massachusetts Legislature in 2007:

I see…protesters photographing and filming into patients and employees’ cars and taking photos of license plate numbers to post on websites.

Demonstrators regularly crowd facility entrances and surround women, facility employees and volunteers with graphic and discomfiting pictures of aborted fetuses, and shout at and taunt them calling them “baby killers” and “murderers.”

Even more egregious are the protestors who dress as Boston Police Department officers and approach women and their companions at close distance, pretending that they are escorting them to the clinic’s entrance, only to taunt them or force leaflets into their hands as they make their way to and from the healthcare facilities.

Alice Verhoeven, vice president and clinic director for Planned Parenthood and Preterm Health Services of Greater Boston, speaking to the Massachusetts Legislature in 1999:

“Patients enter with terrified looks and burst into tears.”

Approximately 100 patients have filed harassment incident reports about the protesters to address their frustrations, anger, and fear at having their entrance to the clinic impeded. One woman stated that the protesters’ actions scared her. “I thought they were going to hurt me,” she said…They tell of their fear as protesters yell and follow closely behind them right up to the door.

Patients are harassed and pursued to the door of the clinic…On countless occasions I have seen patients enter our lobby with terrified, confused looks and often burst into tears as a result of this harassment.

A protester once pushed one of our clinic escorts against a car waiting at the garage.

Liz McMahon, a patient escort at the Boston Planned Parenthood clinic, speaking to the Massachusetts Legislature in 2007:

I’ve had personal experience with several people leaving on a Saturday and by telling them there aren’t as many protestors during the week and they opted to make appointments during the week.

They’re saying, “Don’t get an abortion because you’re going to die, and I’ll show you where the ambulance is going to pull up and take you away.” Or they say things like, “Don’t bother going in the garage, the garage is closed,” when the garage is, in fact, open.

Liam Lowney, the brother of Shannon Elizabeth Lowney, writing to the Legislature in 2007:

Shannon was the first to open the clinic each day. It is because of this that the protesters out front named her “Public Enemy #1.” …As Shannon spoke to my family about her morning routine, I remember my father asking, “Well, where do you park? Do they know which car is yours? Could they do something to your car?” The car turned out to be fine, but never did it occur to us that we could lose her. Now we all know.