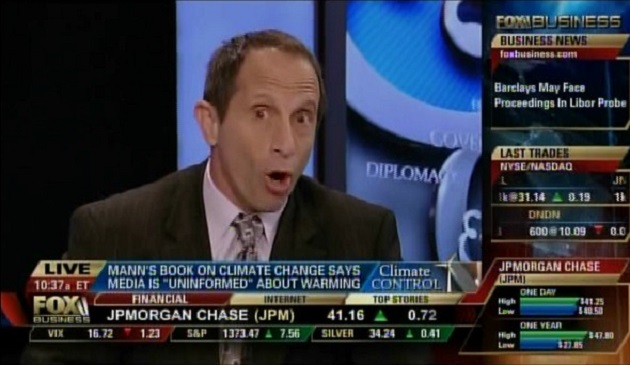 Just before Thanksgiving, many conservatives seized on a new study examining the climate views of members of the American Meteorological Society. It’s no secret that there’s a schism between climate scientists and weather forecasters over climate change, and the study captured this, to skeptics’ delight. The fact that a sizable percentage of AMS members disagree with mainstream climate science represented “the latest in a long line of evidence indicating the often asserted global warming consensus does not exist,” according to Forbes blogger and Heartland Institute fellow James Taylor.

Yet a closer look at the study—conducted by researchers at George Mason University, Yale, and the AMS itself—shows that its main punch line is quite different. The research was chiefly focused on trying to understand why the meteorological community as a whole (the AMS includes climate scientists, academic meteorologists, forecast meteorologists, and general atmospheric scientists, among others) features such disparate views on global warming. And one of its principal findings is that AMS members who publish less peer-reviewed climate research, or less peer-reviewed research in general, are more likely to be climate skeptics.

Far from undermining the scientific consensus on climate change, then, the new study could be said to strengthen it, by defining who’s a relevant expert in the first place. “You listen to the scientists who really know the field in question,” says George Mason’s Neil Stenhouse, a Ph.D. student and the study’s lead author. “And previous studies show that if you ask the scientists who really know climate change, there is high consensus on human causation.”

Similarly, after sorting AMS members by their climate expertise as well as their scientific publishing record, Stenhouse’s study found that this seemed to have a big impact on their views about climate change. “93% of actively publishing climate scientists indicated they are convinced that humans have contributed to global warming,” noted the study’s authors. By contrast, among “nonpublishing” climate scientists, only 65 percent believed that humans have contributed to global warming.

Something similar occurred with a different set of experts within AMS: meteorologists and atmospheric scientists. Those who published a lot on climate change, or a lot on other aspects of meteorological science, generally showed much higher conviction that humans are contributing to global warming (79 percent and 78 percent, respectively) than the “nonpublishing” experts (59 percent).

And there’s more bad news for skeptics who want to cite this AMS survey to bolster their case. You see, the study also showed that conservative political ideology is a big factor behind the denial of climate science by some meteorologists—ideology was a consistently bigger influence on meteorologists’ views, in fact, than their level of scientific expertise. This finding of a major role for ideology, write the researchers, “goes against the idea of scientists’ opinions being entirely based on objective analysis of the evidence.”

The irony, then, is considerable. Even as climate skeptics cite the new AMS survey to claim there’s no scientific consensus on climate change, the survey itself calls into question whether disagreement among meteorologists has much to do with purely scientific considerations in the first place.