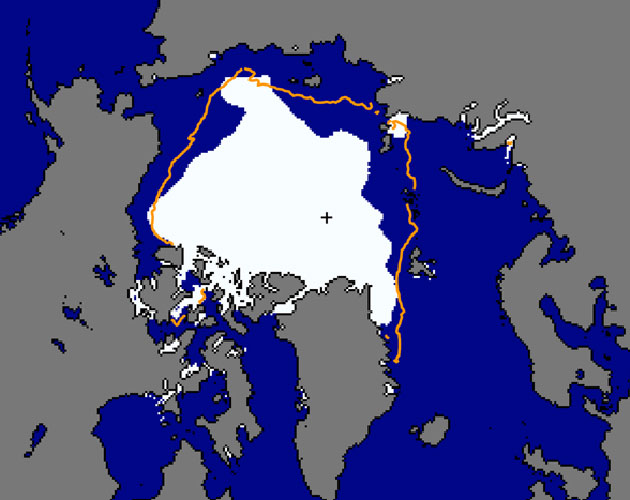 Arctic sea ice reached its minimum extent in Sep. 2013, two days earlier than usual. The orange line is the median minimum extent from 1981 - 2010; note how much lower the ice was this year.<a href="http://nsidc.org/arcticseaicenews/">NSIDC</a>

This story first appeared on Slate and is reproduced here as part of the Climate Desk collaboration.

One of the key indicators and consequences of global warming is ice loss at the Earth’s poles. As the planet warms, on average and over time, every summer more ice melts. It refreezes in the winter, but again as temperatures rise, in general we’ll see less ice at any given time as compared to the year before.

The situation for the two poles is different. In the north the Arctic ice floats on the ocean, and on the south the Antarctic ice is over land and sea. This means that they way they melt—how quickly, how much, even where specifically in those regions—are different. Still, the fact is the ice at both poles is melting. We’ve known this for quite some time.

And some new data show it’s even worse than we thought. 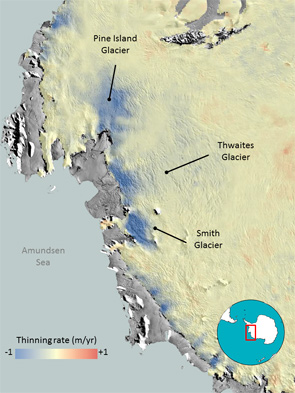 Measurements of Antarctic ice made by the European Space Agency’s CryoSat satellite show that it’s losing about 150 cubic kilometers (36 cubic miles) of ice on average every year just from the West Antarctica ice sheet alone. This is notably more than what had been previously estimated, and is likely to be more accurate due to the satellite’s better coverage and use of radar to measure ice thickness.

The bulk of this loss is from melting glaciers, with their runoff flowing into the sea. This in turn is raising the sea level by about 0.3 millimeters per year (again, just from the West Antarctic ice sheet alone). It’s unclear if this increase in ice loss is due to faster thinning of the ice, or due to better coverage of the satellite in regions otherwise difficult to access. Either way, the ice is melting more rapidly than previously thought.

This amount of loss is staggering; it’s equivalent to about a hundred billion tons. That’s equivalent in volume to a mountain about four kilometers (2.5 miles) high, roughly the size of a medium-size mountain in the Rockies.

I’ll note that some people who deny global warming like to talk about ice in Antarctica increasing, not decreasing. This is at best misleading; the sea ice fluctuates every year, and has grown marginally recently, but this is tiny compared to the loss of land ice. Overall, Antarctica is losing ice, rapidly, with more melting every year.

Maps of ice loss in the Arctic show it dwindling over time. A fair question to ask is, when will we see an ice-free summer there?

This question isn’t all that easy to answer; it depends on past measurements as well as models of how the ice melts. Most conservative models estimate it will happen before the end of this century, but how long before? Some say it may be 50 years or more, some much sooner.

In the Guardian, Nafeez Ahmed reports on a study funded by the U.S. Department of Energy and undertaken by scientists with the U.S. Navy has shown that the Arctic could see its first nearly ice-free summer in just three years, in 2016. These results actually came out last year, and are based on ice loss from a few years back, using a relatively straightforward extrapolation.

In the paper, the scientists claim that ice loss is underestimated by most models because they don’t include feedback mechanisms; that is, processes in the system that amplify other processes. For example, as water warms it cannot hold as much dissolved carbon dioxide. That CO2 is released in the air, accelerating the warming process because it’s a greenhouse gas.

I’m not sure how much stock to put in a prediction of an ice-free Arctic in just a few years, but that day is clearly coming, and soon. Looking at the sea ice extent (essentially, how much area is covered by ice) over the past few years, we’ve lost about 2 million square kilometers over 15 years.* The extent is at roughly 10 million sq. km now, so extrapolating we have 75 years left. I’ll note that’s very rough, and I’d consider that only a decent upper limit to how long it will take. With feedback processes, that’s likely to be a severe overestimate. 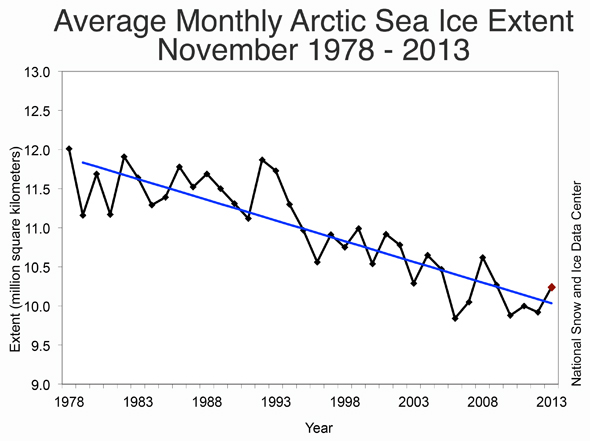 To give you a more visceral sense of just how much trouble we’re in, Andy Robinson, who created a video earlier this year showing the ice loss, has updated it with data including this year’s minimum:

Note that this is volume of ice, not extent, which is a better measure of real loss. Extent fluctuates more, and doesn’t include the thickness of the ice; you can get very thin ice in the winter adding to the extent but not really adding to the total amount of ice. Plus, thin ice melts more readily in the summer.

And, of course, this puts lie to the whole idea that sea ice in the Arctic is “recovering”, which we knew was more hot air from the deniers all along anyway.

Double Pole Loss, What Does It Mean?

So, we’re losing ice, and fast. But what does it mean?

There’s another potential issue, too: This melting ice can indirectly cause weirder weather. As the ice melts, more ocean surface is exposed to the Sun, warming it further. Moreover, as more fresh water is dumped into the salty ocean from the polar ice, the currents in that water change, bringing with them different temperatures to different places. The flow of the jet stream over the pole depends on temperature, and that can change as the temperature changes. You see bigger dips in the stream, bringing cold weather south, and warm weather north. This can also create what are called blocking patterns; high pressure systems that block the normal movement of air, creating stagnant conditions over a region. Alaska’s heat wave over the summer was one from one such blocking pattern, as was Greenland’s last year. A vicious cold snap in the US in March 2013 was also due to such an event.

Unfortunately, from what I can tell, it’s not clear what exactly will happen as more ice is lost at the poles; but it’s a safe bet we’ll get more extreme weather as it occurs. And it’s also a safe bet these changes won’t be beneficial. They’re happening too quickly. Plants, animals, humans: We can’t adapt quickly enough to our rapidly fluctuating environment.

That’s what worries me. Not so much cripplingly hot summers or more severe winters—as bad as those will be—but also the changes in rainfall, flooding, fires, and more. Our ability to feed ourselves depends very strongly on the weather, and that weather is changing. The house odds are getting worse, and the stakes are very high indeed.