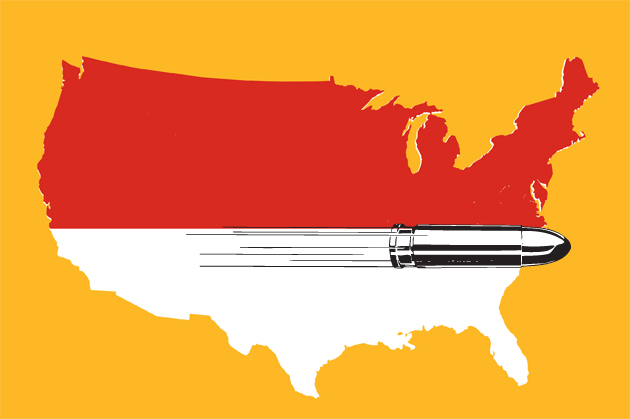 An unthinkable massacre ignites an intense national debate. Then, Congress does nothing. The powerful gun lobby wins again. End of story.

So went the popular narrative last spring with the collapse of gun control legislation on Capitol Hill. Meanwhile, scores of people have been wounded or killed in five new mass shootings and other gun rampages around the country, and an estimated 30,000 have been killed by firearms—including hundreds of young children, as documented in our latest investigation.

But no, the gun lobby did not “win.” The real action after Newtown was not in the nation’s capital—it was in most statehouses around the country, where no fewer than 114 bills were signed into law, aiming in both political directions. America has warred over its deep-rooted gun culture on and off for decades, and Newtown set off a major mobilization on both sides.

Determining how that battle changed the terrain in 2013 isn’t just a matter of the total number of laws passed (some of which contain multiple measures), but also the types of activity and swaths of population they affect. Unsurprisingly, the redder states mostly continued to deregulate firearms, while bluer coastal states—and a more politically split Colorado—moved aggressively to tighten restrictions.

Based on data from the nonpartisan Law Center to Prevent Gun Violence, which tracks state legislation closely, here’s how the barrage of new measures has altered Americans’ ability to legally bear arms:

The most sweeping restrictions came in Colorado, Connecticut, Maryland, and New York, including background checks for gun buyers and bans on assault weapons and high-capacity magazines. Although tracking gun ownership is anathema to the National Rifle Association and its allies, 18 states and the District of Columbia boosted their capabilities to do so: New measures included requiring lost or stolen firearms to be reported (Maryland, New York) and criminalizing the tampering with manufacturers’ identification marks on firearms (Rhode Island). From Florida to Colorado to Washington state, lawmakers required more rigorous reporting of mental-health records to the FBI’s criminal background check system and imposed greater restrictions on the mentally ill.

The long-running NRA-backed movement to deregulate guns also continued apace after Newtown, with a particular focus on expanding concealed-carry rights: No fewer than 63 laws in 26 states made it easier for citizens to pack heat in public, including in Illinois, which became the 50th state to allow such permits. Seven states authorized firearms to be carried in K-12 schools—including Alabama, which now allows the grounds where kindergartners frolic to be patrolled by armed “volunteer emergency security forces” that can include local citizens alongside school employees. Texas alone enacted 12 new measures deregulating guns. (It was also the state with the most child gun deaths in 2013.)

But several states in fact pulled the trigger in both directions. The Democratic-controlled statehouse in Minnesota, for example, was among those improving mental-health reporting but also passed a measure curtailing data collection on individual gun ownership. New Jersey prohibited individuals named on the federal Terrorist Watchlist from purchasing a firearm but also made concealed-carry permit records confidential. Utah passed two measures aimed at halting domestic violence against women—a problem frighteningly exacerbated by lax firearms laws in some states—but also made it easier to carry a concealed gun on university campuses. 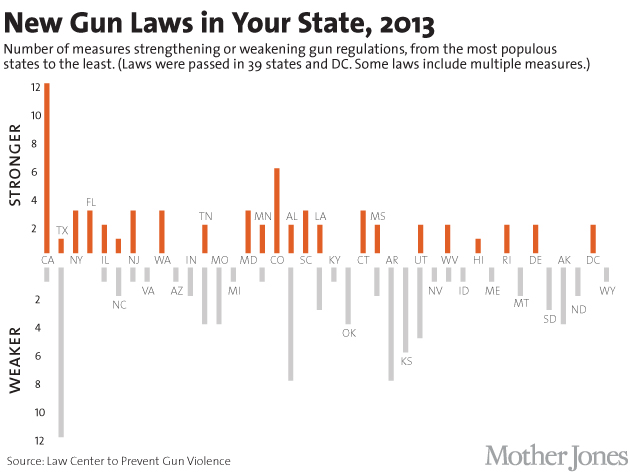 For more on gun violence and gun laws, see our full investigations: Newtown: One Year After, and America Under the Gun: A Special Report on the Rise of Mass Shootings.