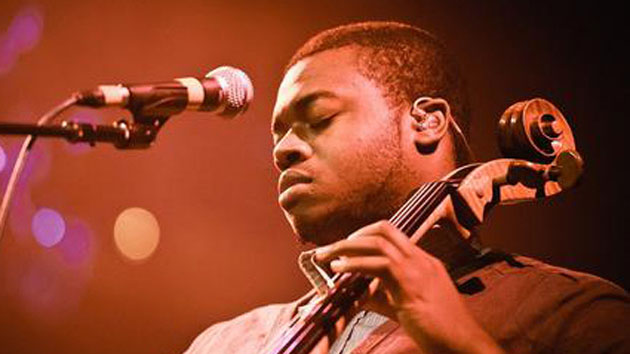 In college, when I played violin in the Yale Symphony Orchestra, our principal cellist was a guy named Kevin Olusola, a goofy, Chinese-studying, bear-hugging premed. Nowadays, Kevin (a.k.a “KO”) is known among YouTube fans as the beatboxer for Pentatonix (PTX), the a cappella group whose version of “Little Drummer Boy” is hovering at the very top of Billboard‘s Holiday chart. In 2011, a Texas vocal trio came across a video clip of his “celloboxing“—beatboxing and playing the cello at the same time. They tracked him down and asked him to join them for NBC’s “The Sing-Off.“

Two years later, he’s helped the group rack up more than 230 million YouTube views, score gigs on Conan and The Today Show, and release three albums. Kevin’s look has evolved since college—less backpack, more swagger—but he’s just as enthusiastic in a leather jacket, laying down the beat for an Imagine Dragons song, as he once was in a tux performing Beethoven symphonies. I caught up with Kevin to talk about how he got started, the trickiest sounds to make, and Pentatonix’s runaway success. But first, the celloboxing video:

MJ: Let’s start with the basics. How did you get into beatboxing?

KO: There was a song by Musiq Soul Child called “Just Friends.” It starts off with a melody line where he’s beatboxing also. When I heard that, I got hooked. I kept doing it and doing it.

MJ: Did you drive your parents and teachers crazy?

“This is a time in music where we think that people are looking for a more raw, organic sound.”

KO: Oh my goodness, I can’t even begin to tell you. My dad and my mom! Especially my dad. I would do it all the time in the car, and he just always thought it was annoying. He was like, “Stop making that noise!” My junior year of high school, I joined the a capella group at Andover and we produced a CD, and I showed it to him and he got it then. When I started pairing cello and beatboxing and he saw that video, he was like, “I can’t believe this is possible!” Now, with Pentatonix, he’s heard our record and he’s our biggest fan. I’m so thankful that he gave me a chance to pursue this, because for Nigerian parents I think it’s very difficult to let their child do something artistic. That’s not necessarily a stable path to making money or having success.

KO: The thing I’ve really gained from my classical music training is how to be a musical person. The band, before they found me, had gone through six different beatboxers. There were some that were good at keeping time, but they didn’t do anything impressive with their mouths. The beatboxer before me did all these different sounds, but he couldn’t keep tempo, and he didn’t understand how to build a song musically. I think that having the two is really important, because we’re trying to make music, at the end of the day.

MJ: Is there any particular instrument or sound that’s surprisingly easy to make, or else surprisingly difficult to make?

KO: The throat bass thing for me is still a little bit difficult. It doesn’t come out as naturally as I want, and it’s something that I have to practice every single time.

MJ: The throat what?

MJ: How do you learn to make a new sound?

“You just see these numbers go up and you know people are watching [the videos], but you don’t realize they’re real people until they come to your concert.”

KO: I just try random things, and if I hear something that fits, I’ll work at it and see if I can refine it. If I hear things in music that I really like, like some kind of crazy snare that works for hip-hop music, I’ll definitely try to emulate it. It’s really a lot about listening. And I’ve watched tutorials online, then listened to myself and said, “It sounds like I’m not doing this right, it sounds like I’m not doing that right.” A lot of tutorials teach you how to do it, but they don’t teach you the refining process. So you kind of just have to learn on your own. It’s not like cello, where you go to conservatory to study, and they can help you.

MJ: Do you ever feel left out as the one non-singer in the crew?

MJ: Can you talk a little more about that process?

KO: We go to one of our apartments and we sit down and start arranging the song. I’ll start with beats. Avi will figure out a baseline. And then we figure out who’s gonna be the soloist. Then we just start trying to figure out harmonies that work with what the soloist is doing. Once we’ve figured out how we want this thing to build, we go back and start refining it, start adding moments. Things that will make people say, “Wow, I can’t believe they just did that with their voices.” We want to show people that the voice has this incredible power to do things that you’d never think possible.

MJ: Why cover “Little Drummer Boy,” of all songs?

KO: It’s funny, it was kind of a natural decision for the group: We’re like, “Well, that makes sense for us. We have a little drummer boy.” But I don’t think we expected it to blow up like it did. We found out today [December 18] that it dethroned Mariah Carey’s “All I want for Christmas is You” as the No. 1 holiday single on Billboard.

MJ: You guys have a massive YouTube viewership. How do you take advantage of that?

KO: We put out good content and that translates into record sales, which has been absolutely awesome. It also translates into ticket sales. We didn’t really think that was going to happen, but it has. You just see these numbers go up and you know people are watching [the videos], but you don’t realize they’re real people until they come to your concert. It’s insane to all of us. I think people are starting to catch on to what we do and what makes us unique. This is a time in music where we think that people are looking for a more raw, organic sound. Everything is so Auto-Tuned, so processed, that we want to show people, “Hey, we can make a song that’s very organic and raw, but infectious and catchy so that people would love to hear it.”