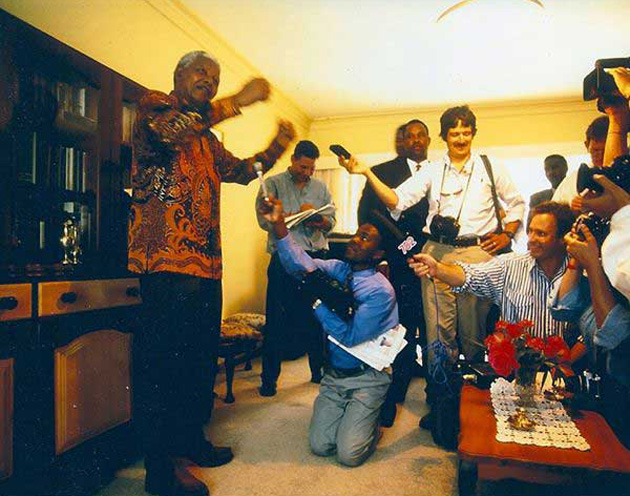 “Would you like to go to prison with Nelson Mandela?”

The question from a press aide left me momentarily speechless. It was October 1996, and I was in South Africa reporting on the Truth and Reconciliation Commission and working on a book about the country’s tumultuous transformation from apartheid. I had covered a number of Mandela’s public appearances, but this one was different. The president had decided on short notice to pay a visit to the last of the three prisons where he had been incarcerated for 27 years.

This trip was personal. For Mandela, that was the best kind of politics.

The narrative about Mandela as a peacemaker often obscures how shrewd and hard-nosed he was as political operator. A trip to an apartheid prison promised to show how Mandela could weave images of division and reconciliation into a seamless cloth.

Yes, I replied, I would be glad to go to jail with the president.

“VICTOR VERSTER PRISON BIDS YOU WELCOME PRESIDENT MANDELA!” The banner hanging over the heavily guarded entrance to the sprawling maximum-security prison represented just another head-spinning contradiction of the new South Africa. This was, after all, a prison, and Nelson Mandela its most famous prisoner. Mandela spent the last two years of his confinement at this facility near Paarl, a bucolic town in South Africa’s wine country.

From the moment Mandela walked out the gates of Victor Verster Prison on February 11, 1990, he took every opportunity to engage in political aikido, harnessing the visceral power of apartheid symbols to his advantage.

Unlike President Barack Obama, who often sidesteps the racism of his adversaries, Mandela relished engaging South Africa’s tortured past. He had tea with Betsie Verwoerd, the widow of former prime minister Hendrik Verwoerd, the reviled “architect of apartheid.” For the 1995 World Cup rugby final, Mandela donned the jersey of the captain of the Springboks, the South African national rugby team beloved by whites.

Inside Victor Verster Prison, I found Mandela’s “cell”—actually a pretty cottage tucked among trees. A rose bush gave the place a sweet scent. A prison official explained that this house was built for Mandela as his release neared, “as part of reintroducing him to civilized society.”

Mandela stepped through the archway and flashed a broad smile of recognition. He had hearing aids in both ears, and his gait was more a shuffle than a stride. His pace was slowed due to chronic knee pain. Yet he seemed upbeat and happy.

“Some of the best years of my life were spent here,” he declared. It was a curious claim for an ex-prisoner to make, but, as he explained, “the negotiations with the government intensified here, and this was where I met many of the top ANC leaders for the first time.”

I asked if he’d ever considered escaping.

“No,” he said. “That would not have been consistent with what we were trying to accomplish.” He had repeatedly refused the government’s conditional offers of release during his 27 years in jail.

Mandela was a prisoner, but he held his jailers hostage. As long as he was in jail, the apartheid government was a pariah on the world stage.

A poignant moment came when Mandela asked what had become of Warrant Officer James Swart, the guard who lived with and cooked for him. “He’s outside,” replied one of his aides.

The next moment, a tall, thin mustachioed man in a jacket and tie walked in. Mandela smiled and greeted him warmly. As he often did with guests, Mandela held Swart’s hand as he spoke. “I’ll never forget the kindness you and your wife showed me while I was here,” he said, looking directly into his eyes.

As Mandela finished, his press aide motioned for me to come over. She introduced me to the president and explained that I was an American journalist. Mandela instinctively reached for my hand, but not for a perfunctory handshake. He began walking with me, hand in hand, chatting as if we were old friends going for a stroll. “Mr. Goodman, thank you for coming to South Africa,” he said in his gravelly voice. “What do you think of it here?”

I fumbled for words at first—Mandela was an icon to me, a man whose name I’d chanted as a protester in college, and here he was holding my hand and wanted to know what I thought. South Africa was the most exciting country in the world, I said, a place where remarkable change was happening. I said it was an honor to meet him. He smiled warmly, his eyes twinkling. “It is an honor to meet you too,” he replied. He released my hand, and shuffled to his waiting car.

Mandela finished his visit by attending a function for the prison staff, who packed a small auditorium. He told his former guards how people often asked him how he had avoided growing bitter about his time in prison.

“This place contributed to my own approach in this country,” he went on. He said that most of the staff had treated him with dignity, though “some Afrikaner guards were very crude and cruel. But when an Afrikaner changes, he changes 100 percent and becomes a real friend.”

Then, beaming with delight, he posed with the euphoric guards and their families, holding babies and draping his arms around some of the men in uniform.

This was the essence of Mandela. He challenged his country while embracing his countrymen. In doing so, he liberated himself, his former tormentors, and his nation.