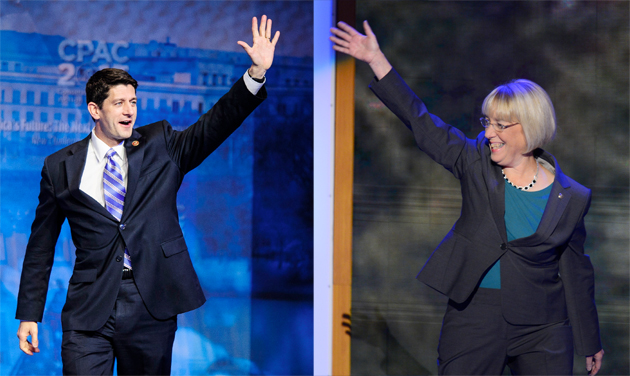 Sen. Patty Murray (D-Wash.) and Rep. Paul Ryan (R-Wis.) were noticeably pleased with themselves when they announced their new budget deal at a press conference Tuesday evening. The 15-minute session was filled with compliments and bipartisan kumbayas for reaching such a sensible accord. “From the the outset,” Ryan said, “we knew that if we forced each other to compromise a core principle we would get nowhere. That is why we decided to focus on where the common ground is.” Murray backed that up, stressing that the two found success because they ditched ideological rigidity in favor of accommodation. “We have broken through the partisanship and the gridlock,” Murray said, “and reached a bipartisan budget compromise that will prevent a government shutdown in January.”

Compromise, compromise, compromise. It was the word of the day. Even President Barack Obama joined in on the hosannas. “This agreement doesn’t include everything I’d like—and I know many Republicans feel the same way,” he said in a statement shortly after the deal was announced. “That’s the nature of compromise.”

Who doesn’t like an agreement where each side gives a little to get something in return? That’s the basic concept of negotiation that we all learn in kindergarten. The only trouble is our political class has a distorted sense of what constitutes a “compromise.” The Washington Compromise lacks any relation to the actual policies being discussed. It’s just a grade-school level formula you can plug into any scenario. Find the midpoint between two competing plans and you’ve found the centrist goal. The trouble is, not every starting point is created equally.

It’s a simplistic vision of politics, akin to the critics who think all political disagreements can be boiled down to winners and losers, or the persistent Green Lantern notion of presidential power that Obama could accomplish anything if he would just lead already.

According to Washington wisdom, the new budget meets the platonic ideal of a compromise since it slices everything neatly down the middle. Ryan’s initial budget accepted sequestration’s caps on military and domestic spending, which allocated $967 billion for 2014. Murray’s budget ignored sequestration and slotted $1.058 trillion for 2014. The compromise? $1.012 trillion. In other words, the two elected officials and their staffs spent the past month figuring out how to add their numbers together and divide by two.

Rather than discerning whether the country would be better off if either domestic programs or military spending were spared sequester’s ax, the Ryan and Murray split it right down the middle. Fifty percent of the new spending goes to the military, 50 percent to domestic programs. Murray and Ryan used a similar logic for the revenue offsets included in the budget. Ryan got $6 billion in savings from federal employee pensions, so Murray had to get an equal $6 billion in revenue from military pensions.

But Ryan and Murray’s budgets weren’t created on equal footing. Ryan’s initial budget is a conservative wish list, calling for a decimation of the social safety net and a free-market makeover of entitlement programs. If it had been enacted, Ryan’s budget would have cut $5.3 trillion in nondefense spending over the next decade—largely by nixing programs relied on by the poor—reducing government spending to its lowest level since 1948. It’s a radical plan, but one he had no trouble getting through the House. Despite 10 Republican defectors, Ryan’s budget easily passed, 217-201. The Republican House majority has ideological consistency, allowing Ryan to write a budget that represents the rightward flank’s ideal vision for the government.

Murray, on the other hand, didn’t have that luxury. Senate Democrats are a heterodox group representing wildly different strains of liberalism. Her budget committee was a microcosm of that larger trend. Murray had to craft a budget that could appeal to two diametrically opposed independents who caucus with the Democrats: avowed socialist Sen. Bernie Sanders (I-Vt.) and moderate Sen. Angus King (I-Maine), with an ideological range of Democrats in between. Unlike the House, where Ryan had a comfortable buffer if he offended a few moderates, Murray needed every Democratic vote in the committee and could only afford to lose a handful of votes in the full Senate.

As a result, her budget is far more modest. It called for closing tax loopholes but not raising tax rates. Her budget ditched the sequester’s onerous cuts but offset them with new revenue and alternative spending cuts, accepting the deficit reduction from the 2011 deal as a given. When it was first released, the Washington Post’s Ezra Klein termed it vague and institutionally conservative. “While Murray prioritizes protecting both the recovery and key investments,” he wrote, “this isn’t the jobs-and-investment version of the Ryan plan—it’s not a bold or creative document to deal with our severe economic problems, but a tentative document that replaces the sequester, stabilizes the debt and makes a few targeted investments.”

Compare that with a budget proposed by the Congressional Progressive Caucus, an outright liberal document. The caucus pushed for new tax brackets on the highest earners and a tax on financial transactions, while instituting the public option in Obamacare, immediate stimulus, and long-term cuts to military spending. Now, this document stood no chance of passing the current Congress. But neither did Ryan’s. Like the Republican’s budget, the progressives’ plan was a budget of principles, not the budget of governance that Murray put forth.

I posed the problem of the Washington Compromise to Murray this past March when I was writing a profile of her for The American Prospect. I met Murray in her downtown Seattle office a week after her budget cleared the Senate. Murray ruefully shook her head and laughed when I mentioned Washington’s tendency to consider a compromise anything that splits down the middle. “Yeah, I know,” she said. Murray was adamant that Ryan’s take was out of touch and didn’t “reflect where the American public is” following the 2012 election. But she talked about how the misguided notion of compromise had sunk the supercommittee—a group of senators and House members who failed to find a framework to avert sequestration in 2011—and said she had learned from that experience. “You have to resist that,” she said. “Look, every negotiation I have ever been in my life is tough. You do the easy things first. We have to do the tough things first.”

In the end, Murray couldn’t follow through on that plan. Sequestration was written to be unpalatable to both Democrats and Republicans, yet the vast majority of those cuts are here to stay. The new budget deal only replaces one-third of sequestration’s cuts for 2014 and 2015. So much for compromise.