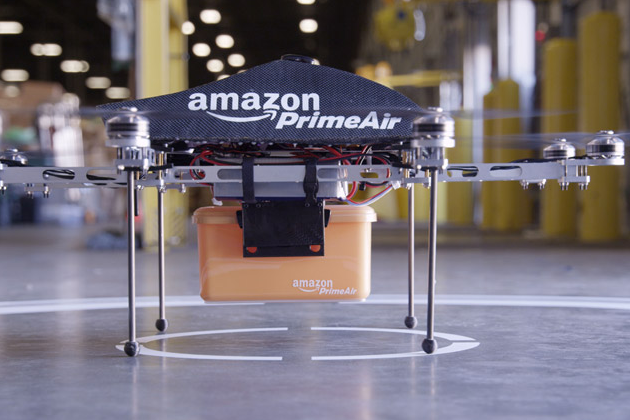 “It looks like science fiction, but it’s real.” That’s how Amazon, the online retailing giant, describes its new plan to deliver blenders, spice racks, and sex toys in 30 minutes or less via drone. On Sunday, CEO Jeff Bezos announced that his company is in the process of testing these new delivery drones and aims to have them ready by the time the Federal Aviation Administration (FAA) is expected to open up US airspace to unmanned aerial vehicles in 2015. But after that date, Amazon’s blender-delivering drones will still face big obstacles, such as the states and cities that are hostile towards drone use; potential accidents with passenger planes; GPS and privacy concerns; and roving bands of laser-wielding package bandits.

While many states are vying for the right to be official FAA drone test sites, others are doing their best to make their skies unwelcome to drones. Both Idaho and Texas have passed laws that restrict private citizens from using drones to take photos—and it’s likely that Amazon drones will need to be equipped with cameras, according to the Washington Post. Another seven states have jumped on the drone-banning bandwagon, by stopping law enforcement (but not private companies) from using them for surveillance. There are also a number of cities and counties that are considering making their air spaces “drone-free zones.” Charlottesville, Virginia, Iowa City, Iowa, and St. Bonifacius, Minnesota, have banned drones for at least two years. Syracuse, New York, considered a bill in October that would have banned drones but decided to hold it until the FAA regulations shake out. And a Colorado town even considered issuing drone-hunting licenses.

Here’s a map showing which states have passed legislation restricting drone use, put together with help from the National Conference of State Legislatures and the ACLU. Many other states have introduced bills that are still under consideration, so check your own state legislature for more information:

Currently, FAA rules prohibit drones from carrying people or property for compensation and only allow them for “important missions in the public interest” like search and rescue, patrolling the border, and firefighting. Unmanned aircraft are also prohibited from airspace over major urban areas—because of a higher likelihood of accidents with traditional aircraft, and other obstacles, such as buildings and power lines. When the FAA lifts drone restrictions in 2015, Amazon drones would likely be traveling in urban areas, given that they can only fly within 10 miles of a distribution center, many of which are located in the suburbs of major cities. But cities aren’t likely to be any less dense in two years, raising the possibility of collisions. The FAA is still working on how to safely implement drones in urban areas—particularly by employing sensor technology—but it’s still a legitimate concern, given that drones have already crashed into a lake, a Navy ship, and Manhattan.

If Amazon can find a way to make drones work while avoiding cities or airplane flight paths, the company would still need to implement very precise GPS directions to ensure each package goes to the right place. (In many places, a foot or two can mean the difference between your front door and the sidewalk.) The Washington Post points out that technology isn’t precise enough yet to let drones fly themselves, so one option would be to have pilots fly drones via computer, to avoid GPS mishaps. But that would require them all to have cameras, creating a slew of new privacy concerns: “We need rules so that we can enjoy the benefits of this technology without becoming closer to a surveillance state,” says Allie Bohm, an advocacy and policy strategist for the ACLU.

Finally, there’s also the prospect of thievery. All it could take is an effective drone-destroyer—a hunting rifle? laser weapon? laser pointer?—for a bandit to be watching your movies, wearing your slippers, and making smoothies in your blender. Amazon claims that by 2015, it “will be ready” to unleash delivery drones in US skies—but America probably won’t be.