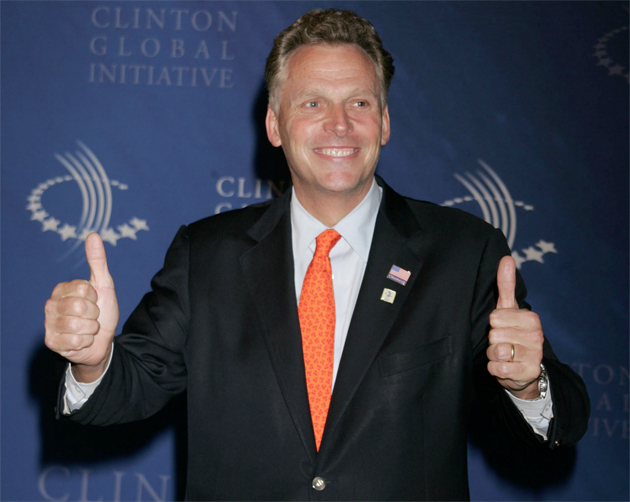 Terry McAuliffe and I go way back. I first started writing about him in 1997, when Mother Jones assigned me to look into a lawsuit in DC Superior Court in which McAuliffe, the Democrats’ super-fundraiser, was being sued by some of his business associates. That story turned into something much bigger. I went down the rabbit hole of McAuliffe’s business dealings, probing his relationship with a pension fund run by a union he raised lots of money from—a money trail that ended up making McAuliffe part of my life for over a year. During that time, he never returned one of my phone calls and I never had the opportunity to meet in person the glad-handing, boyish “Macker,” who first drew headlines by wrestling an alligator for a political donation. Nonetheless, the time I spent covering McAuliffe—who became head of the Democratic Party during George W. Bush’s first term—has left me dumbfounded that he (according to the polls) is poised to become the next governor of Virginia.

Allow me to explain. McAuliffe represents an unseemly slice of Washington. His primary role in politics for the past two decades or more has been raising money—most notably, for the Clintons. He cooked up the idea of essentially renting out the Lincoln bedroom during the Clinton administration as a fundraising vehicle, and he smashed all previous presidential fundraising records in the process. When McAuliffe was the Dems’ top fundraiser, a campaign finance scandal besieged the Clinton White House. Coincidence? No. McAuliffe was all about pushing the envelope when it came to the political money chase.

That alone might not be enough to render him a distasteful political candidate. What’s different about McAuliffe is his brazen mixing of his campaign fundraising activity and attempts to enrich himself personally. Many of McAuliffe’s business deals have come about due to his place in the political cosmos, not because he possesses a wealth of business skill. That tangled history has linked him to a long list of unsavory characters.

Let’s take a look at some of his business associates over the years.

Richard Swann: Swann is McAuliffe’s father-in-law, and his story starts back in 1980, when Swann helped found American Pioneer Savings and Loan in Florida. Ten years later, federal regulators seized the thrift, which was drowning in bad loans and foreclosed real estate. The bailout cost taxpayers more than $500 million. Swann settled charges with the Securities and Exchange Commission, which found that Swann and a partner had broken the law in selling $10 million worth of junk bonds from the thrift to shore up its reserves. Investors—mainly mom and pop depositors at the thrift—lost their shirts, and Swann eventually filed bankruptcy. But he saw an opportunity in the wreckage of his former savings and loan. In 1991, he helped McAuliffe set up a partnership to buy up the failed thrift’s former real estate assets, which were being sold at rock-bottom prices as part of the federal liquidation.

Swann and McAuliffe persuaded the International Brotherhood of Electrical Workers pension fund to finance the purchase of Orlando strip malls and apartment buildings on the cheap in a highly risky investment scheme. The pension fund put up $38 million; McAuliffe put up nothing, but he got a 50 percent stake, meaning that if the deal went south, the pension fund would lose millions while all he would lose were his free shares in the partnership. The deals didn’t perform well, and the union never got its promised 9 percent preferred return—about what Treasury bills were paying back then. McAuliffe, though, walked away with $2.4 million after the pension fund bought him out. The US Department of Labor sued the union for making imprudent investments and two IBEW officials were forced to pay six-figure fines; the union had to reimburse the pension fund for the losses. Swann and McAuliffe escaped unscathed by the investigation.

Tony Coehlo: Coehlo is a former California congressman who resigned in 1989 after the disclosure that he had taken a sweetheart loan from the operator of a troubled savings and loan operator and used the money to buy junk bonds from the notorious Drexel Burnham Lambert, which that year paid a record $650 million to settle criminal charges with the SEC for stock manipulation. Coehlo and McAuliffe worked together on various political campaigns, but they also were involved with a real estate firm in Washington, DC. Former business associates accused the pair of using their political connections to win improper commissions on deals involving federal agencies. The matter eventually was settled confidentially.

Gary Winnick: Winnick was the founder of Global Crossing, a fiber optic company that earned McAuliffe $8 million on an initial investment of $100,000—a deal he accessed because he was working as a consultant to Winnick before the company went public. Winnick had been an acolyte of junk bond king Michael Milken before starting Global Crossing. His management of Global Crossing has been compared with Ken Lay’s leadership of Enron. He and other top executives hid the company’s losses and cashed out more than a billion in stock before the company collapsed in 2002 and caused $54 billion in shareholder losses. Lots of people thought Winnick should have gone to jail, but he avoided any serious federal action. McAuliffe cashed out his shares in Global Crossing before it crashed and was not accused of any wrongdoing, but his profiteering in this case has been a political liability for him.

Anthony Rodham: When McAuliffe in 2009 created GreenTech, a now-troubled electric-car company, he turned to an old pal for assistance in courting foreign investors: Tony Rodham, who is best known as one of Hillary Clinton’s embarrassing brothers. A former repo man, prison guard, and private eye, Rodham by then had a long history of trying to cash in on his famous sister’s connections and generally causing problems for her. In 1999, he and brother Hugh nearly caused a diplomatic crisis with a plan to sell hazelnuts from the Republic of Georgia; their partner was a local political boss who also happened to be a political rival of the country’s president and US ally, Eduard Shevardnadze. Over the years, Rodham has been in the news for the occasional fistfight and for child-support arrears. He was implicated in the Clinton pardon scandal. But McAuliffe somehow thought Rodham was just the guy to help him with his electric-car venture. Rodham owns a company that solicits foreign investors for American projects (deals that allow these foreign investors secure US visas). GreenTech relied heavily on foreign investors. Now, the car company (McAuliffe resigned from the firm to run for governor) and Rodham’s visa operation are under investigation by the SEC.

Joseph Caramadre: Caramadre is a Rhode Island estate planner who pleaded guilty to scamming terminally ill people by stealing their identities and buying annuities in their names. When they died, Caramadre and his investors could cash in. McAuliffe invested $33,000 in this scheme in 2006 and netted $47,000 in return. Caramadre also was a big donor and fundraiser for McAuliffe’s first run for governor in 2009, giving $27,000 to McAuliffe’s campaign. (Caramadre apparently wanted to become an ambassador to the Vatican.) During this most recent governor’s campaign, Bob Lewis, a veteran AP reporter, was fired for reporting inaccurately on this episode, and the matter evaporated as a campaign issue. But that doesn’t change a basic fact: McAuliffe was doing business with this guy.

The list of McAuliffe’s questionable business dealings goes on. But he has used his substantial influence to try to minimize the news coverage of his various wheeling-and-dealing. In 1996, the New York Daily News fired reporter David Eisenstadt after he wrote an unfavorable story about McAuliffe potentially having connections to notorious fundraiser John Huang, who in 1999 pleaded guilty to felony charges for arranging more than $150,000 in illegal campaign contributions to the Democratic Party. McAuliffe later gloated to the Washington Post about having called paper owner Mort Zuckerman to get Eisenstadt canned.

I learned about McAuliffe’s dark side firsthand while trying to report on his business deals. He sicced his lawyer, Watergate prosecutor Richard Ben-Veniste, on me early on in the process. And when the Washington Post hired me to continue working on McAuliffe stories, he continued to threaten my editors with veiled libel threats. He even came in for a meeting with Len Downie, then the paper’s executive editor. It was eerie how much he knew about what I was doing at the paper. It turned out that McAuliffe was a good source for some of my colleagues, and they were feeding him information that he was using to try to kill the investigation. It was a classic example of McAuliffe playing the inside game, a skill that has helped him survive this long in politics despite questionable financial dealings and now, perhaps, has helped him get elected to an important and high-profile political job.