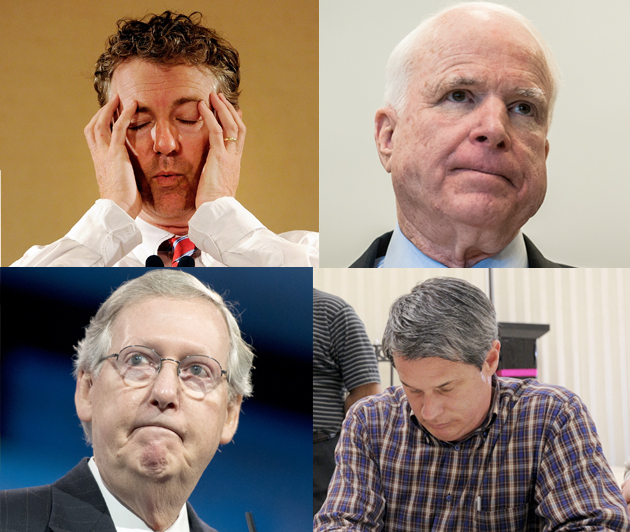 Senate Democrats upended the chamber’s normal procedure Thursday morning, restoring a sense of normalcy to the oft-dysfunctional institution by changing the filibuster rules for confirming judicial and executive-branch nominees. Majority Leader Harry Reid (D-Nev.) turned to the so-called “nuclear option”—a parliamentary trick to write the rules with just 51 votes, rather than the standard two-thirds majority required to change Senate procedures. Clearing a filibuster on those appointees will no longer take a 60-vote supermajority, and President Barack Obama’s judges and White House staff can now be approved by a simple up-or-down vote.

It’s not an outrageous concept. Senate rules were changed regularly under these basic-majority votes when the late Robert Byrd of West Virginia was majority leader in the 1970s. Yet on Thursday, Republicans acted as if the world had ended and democracy would soon collapse thanks to Reid’s egregious change of the rules. It’s hard to take their doom-and-gloom predictions too seriously. Republicans, including Minority Leader Mitch McConnell, were amped to end filibusters of judicial nominations in 2005 until Democrats caved and cut a deal.

Here’s a sample of the some of the most hyperbolic Republican reactions to filibuster reform:

“He [Harry Reid] is not a dictator. He does not have the power to dictate how this Senate operates.”

“What we really need is an anti-bullying ordinance in the Senate. I mean, now we’ve got a big bully. Harry Reid says he’s just gonna break the rules and make new rules.”

“They’re governed by the newer members…who have never been in a minority, who are primarily driving this issue. They succeeded and they will pay a very, very heavy price for it.”

“Most dangerous and consequential change in the rules since Thomas Jefferson wrote them.” — Lamar Alexander

6. Sen. Alexander, again, this time on the floor of the Senate:

“Rather than fix the Obamacare disaster, today Harry Reid doubled down on the brass knuckles partisan power politics that produced it—jam it through, no compromise, unilaterally make up new rules whenever needed. This isn’t just a shame for the Senate; it’s scary and dictatorial for our country.”

As bad as the Democrats’ #nuclearoption is for the future of the Senate, it won’t distract Americans from #Obamacare problems. #PowerGrab

“Just yesterday, I saw a story about a guy getting a letter in the mail saying his dog, his dog had qualified for insurance under Obamacare. So yeah, I would probably be running for the exit, too, if I had supported this law. I would be looking to change the subject, change the subject just as Senate Democrats have been doing with their threats of going nuclear and changing the Senate rules on nominations.”

“This action to change the Senate rules and weaken the Founding Fathers’ vision for checks and balances is yet another disturbing power grab and reminds the public of how the Democrats jammed through the unwanted health care law.”

“The Democrats’ vote to invoke the ‘nuclear option’ and fundamentally change the rules of the Senate is a raw power grab which is deeply disappointing. Like the manner in which they rammed through Obamacare on party line votes, they have now broken the rules of the Senate to allow them to do the same for the president’s executive and judicial nominees.”

Bad day for America and an even worse day for #Nevada. #NuclearOption equals nuclear waste for Nevada.

“The silver lining is that there will come a day when roles are reversed. When that happens, our side will likely nominate and confirm lower court and Supreme Court nominees with 51 votes regardless of whether the Democrats actually buy into this fanciful notion that they can demolish the filibuster on lower court nominees and still preserve it for Supreme Court.”