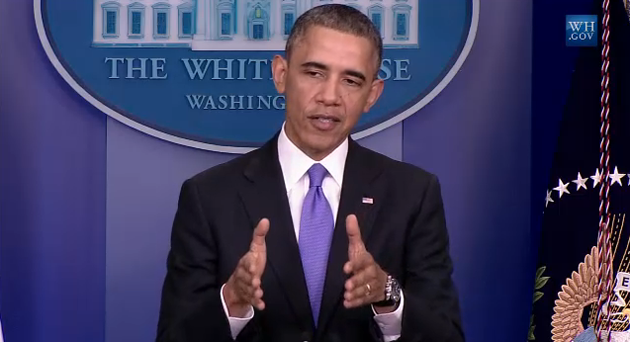 President Barack Obama announced a new administrative tweak to his health care law Thursday morning, an attempt to assuage the congressional Democrats who have been unnerved by the law’s botched rollout. He essentially offered a one-year reprieve to insurance companies. The White House will no longer prevent insurance companies from keeping customers enrolled in plans that don’t meet Obamacare’s minimum requirements of coverage. But his remedy for the raft of cancellation notices sent to consumers in the small individual market (dominated by junk plans) won’t solve the problem unless the president gets buy-in from the same insurance companies that initiated the problem.

“This fix won’t solve every problem for every person, but it’s going to help a lot of people,” Obama said, speaking in the White House briefing room.

Some House and Senate Democrats got skittish after millions of people received letters informing them that they’d lose their insurance thanks to Obamacare. This seemed to defy the president’s promise that “if you like your plan, you can keep your plan.” Sen. Mary Landrieu (D-La.) introduced a bill—cosponsored by six fellow Democrats—that would force insurers to continue their coverage in 2014 for people who already have those plans. In the House, Rep. Fred Upton (R-Mich.) proposed a bill that would allow insurers the license to continue selling these plans—many of which provide insufficient coverage—to anyone who wants them.

Obama, fearful that any congressional action on the Affordable Care Act would open the law to wider changes, is preempting legislation via executive fiat. The White House will send letters to state insurance commissioners, instructing them to allow insurance companies to sell plans for 2014 that don’t meet the minimum requirements dictated by the ACA. This exemption only applies to customers already enrolled in such plans. Unlike Upton’s bill, the president’s fix won’t allow new consumers to purchase these sub-standard insurance plans. The White House insists that this is just a one-year delay, and that health insurance companies will need to meet the minimum requirements come 2015. But will cancellation letters be less unacceptable next fall?

At first glance, the remedy might help the White House on the PR front. But many consumers who received cancellation letters still may not be able to keep their plans. That’s because the fix won’t accomplish anything unless insurance companies cooperate. The White House’s tweak will allow insurance companies to continue offering these plans in 2014; it doesn’t require them to. “They have the ability to reach back out to the folks they’ve canceled,” a senior White House official said during a conference call with reporters. But some insurance firms might not want to reach back to customers they’ve already canceled. They might not be willing to offer the same plan at the same price (insurance firms cancel policies and change premiums all the time—not only because of the ACA).

If insurance companies decide to keep offering these plans, the Obama administration will make it a painful process for these firms. Insurers who choose to keep these flawed plans must send their customers a letter that explains, in detail, what coverage is missing from the policy. These letters also must inform consumers that better options and subsidies are available within the Obamacare marketplaces. With all the rigmarole, insurance companies might not bother.

The reason these plans were canceled in the first place was that they were lousy. They might have been cheap, but they barely met basic insurance standards. These plans relied on consumer ignorance. Forcing insurance companies to spell out the lack of coverage could ensure that these cancellation notices stick—for the right reason.

America’s Health Insurance Plans, the trade association of insurance firms, came out against the fix Thursday morning. “Premiums have already been set for next year based on an assumption of when consumers will be transitioning to the new marketplace,” the group’s president said in a statement. “If now, fewer younger and healthier people choose to purchase coverage in the exchange, premiums will increase and there will be fewer choices for consumers. Additional steps must be taken to stabilize the marketplace and mitigate the adverse impact on consumers.”

Obama’s fix may win him some political breathing room as the debate over Obamacare implementation continues. But it won’t change a fundamental fact: The insurance market is easily exploited by the insurance firms. And it likely won’t keep the foes of Obamacare from exploiting phony outrage over the cancellations to undo Obamacare. “I’m highly skeptical they can do this administratively,” House Speaker John Boehner said after news of Obama’s announcement leaked. “I just don’t see within the law their ability to do it.” The House is still scheduled to vote on Upton’s bill on Friday.