On Friday, the Dyersburg Trojans beat the visiting Jackson Northside Indians 34-14 to advance in the Tennessee high school football playoffs. But the game wasn’t without controversy: A Facebook page managed by the Dyersburg coaching staff proudly highlighted a half-dozen photos of Dyersburg students holding up a giant “Trail of Tears” banner to taunt the visiting Jackson Northside team.

Dyersburg principal Jon Frye said he was not aware of the photos on the football team’s Facebook page but would ask moderators to take them down. “I will be leaving here and going to the fieldhouse as soon as you and I are done,” he told Mother Jones on Wednesday. Sure enough, the photos have since been removed, but here’s a screenshot: 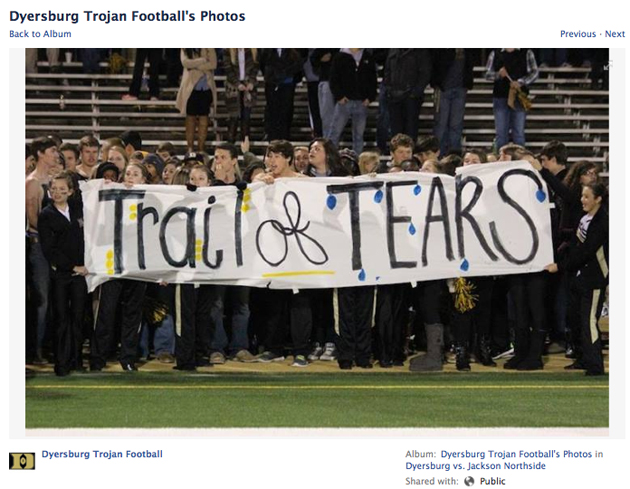 Frye, who did not attend the playoff game, said he became aware of the signs on Friday and met with students on Monday and hopes this will be the last of it. “Largely I tried to draw a parallel between persecuted population groups,” he said. “You would not take African Americans and try to draw a parallel to an event in which a lot of African American people had died.”

This is the second recent incident involving fans of a high school football team using “Trail of Tears” signs to taunt “Indian” opponents. That same Friday night, the principal of McAdory High School in McAlla, Alabama, was forced to apologize after his team took the field for their second-round playoff game against the Pinson Valley Indians by running through a paper sign reading “Hey Indians, get ready to leave in a trail of tears.”

The incidents come amid a renewed push by activists and lawmakers to persuade the Washington NFL franchise to change its name and logo to something less racially insensitive. On November 5, DC’s city council approved a resolution asking the team to change its name. Although supporters of such names say the names are intended to honor American Indian heritage, the lesson of Dyersburg and Jackson Northside may be just the opposite.

“I haven’t given that one a ton of thought, I know, but I guess you could make the logical connection if they weren’t named Indians then you couldn’t have this particular situation,” Frye said of the school’s opponent. “I suppose there’s some truth to that.”