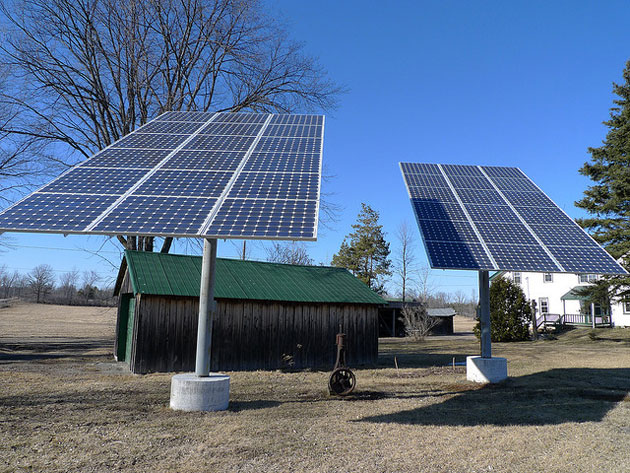 Being a utility executive used to be a sweet gig.

State regulators told you how much you could charge your customers for electricity and dictated your profit margin. Your job was to build big power plants, or buy energy from those that do, and distribute it your customers. And those customers weren’t exactly going anywhere. After all, you owned the transmission lines that delivered your electrons to their homes. In other words, it was a bit like sitting in the corner suite of AT&T, circa 1981, when Ma Bell was the only game in telephone town.

Those days are over. Regulators now want you to obtain a growing percentage of the electricity you sell from wind, solar, and other renewable sources that are carbon-free but intermittent, which plays havoc with the power grid. And your customers? They’re increasingly generating their own electricity from rooftop solar arrays, fuel cells, wind farms, and self-contained power systems called microgrids. The rapid expansion of this so-called distributed generation deprives utilities of revenues while leaving them liable for maintaining the grid. And increasingly severe weather spawned by climate change is raising doubts about the wisdom of relying on a centralized power system.

David Crane is not a utility chieftain but, as chief executive officer of NRG Energy, one of the United States’ largest independent energy producers, he faces the same disruptions that are roiling the power industry. NRG owns big fossil-fuel-burning power plants, but the $9 billion company increasingly has been placing bets on solar, wind, and distributed generation.

“Utility executives are usually the antithesis of visionaries,” says the blunt-spoken Crane, who sat down with The Atlantic to talk about the future of the energy industry in the age of climate change and why in the near future you will become your own utility.

NRG, for instance, is collaborating with inventor Dean Kamen on a 10-kilowatt device for the home called the Beacon 10 that can convert natural gas, biogas, and even household garbage into electricity, generate heat, and store in a battery the electricity generated from solar panels.

Todd Woody: There’s been a lot of dark talk from utility executives about how the rise of rooftop solar threatens to send utilities into a “death spiral.” Are utilities’ days numbered?

David Crane: I completely agree that the distributed future will being utterly destructive of the utility model that we now have. No one wants to spend more on electricity than they have to. If you can monetize the solar value of your own real estate—put solar panels on your roof to produce your own power and do that more cheaply and more reliably and add capital appreciation to the value of your own home, why wouldn’t you do that?

I actually think we’re in the first stages of adaption to climate change and this extreme weather. The transmission and distribution system that the regulated utilities rely on may have been one of the biggest feats of the 20th century but we’re now in the 21st century. I can’t tell you how quickly the switch to distributed generation will happen, but I’ll tell you that after a couple more Superstorm Sandy’s it’ll happen a hell of lot quicker.

So what does this distributed energy system of the future look like?

I think the dominant paradigm replacing reliance on the grid may be actually be the natural gas distribution system. Some 34 million American homes have a natural gas line into their houses. And all we need is a technology that converts that natural gas into electricity in your basement and then solar has the partner it needs for me to tell the owners of the grid to just shove off and disconnect my wire. The day is coming when people are going to be converting natural gas into electricity in their own home.

Tell us about the Beacon 10 that Dean Kamen has invented and which NRG will provide to its customers.

Since the Dean machine and solar systems can share the same electronics it makes the cost of rooftop solar much more economic. So for the disconnected-from-the-grid home of the future, power first comes from solar on the roof because that’s the lowest marginal cost. The Dean machine also has a battery so you decide how much or little natural gas you want to use. When there’s not enough solar, you turn on the Beacon 10. Then ideally, the grid itself would just be the ultimate backup. It’s the coolest thing I’ve ever seen.

Will the Beacon 10 be sold or leased to customers?

They will probably more leased to customers. They way we are envisioning this is that if we had 10,000 of these machines just in the greater New York City area and we as a company had control of the machines, that becomes a 100-megawatt peak power plant as well.

We see the machine as more as the centerpiece of a series of products and services that we would sell to you as a homeowner and then we would basically manage your own energy supply at your home. And then if you had extra, we would sell it back to into the grid and share any benefit of that with you.

That won’t make the utilities happy.

No, they will be totally unhappy.

We’ve also developed a solar canopy that can be used as a gazebo or could be put over a patio or used as a carport. It’s a self-standing structure that you can put in and orient to the sun. It will be an opportunity multiplier in terms of the number of residences that can’t do solar now because maybe they’ve got a 15-year-old roof or a roof that orients to the north or they have trees around the house. It’s designed for homes or small businesses. It’ll be in the market in 2014.

NRG has a lot of big power plants as well. How will distributed generation impact your business?

We’re sort of where long-distance, fixed line telephony was in 1985. Right now it’s about the time where you can say it’s the end of the long-distance fixed-line world. Let’s just call it game over, cell phones won. But it took 25 years.

If we assume the pace of change accelerates, I definitely think there’s going to be a significant decline in the significance of big power plants. But they’re still going to be around as the backbone of the grid for another 20 years.

I think what’s more interesting long term is that ultimately does the grid just become a backup system the way the post office is effectively a backup system for Federal Express and UPS for high-value mail? Or do we actually get to the point where we are tearing down the grid because it’s actually not being used at all?

When you look five years ahead, what does the energy landscape look like?

I think five years ahead you see an energy landscape seriously in transition. While everyone in the power industry is realizing there is a threat here, there is a very wide discrepancy as to whether it’s real threat or a fad. I think five years from now everyone gets it and the industry is completely shaking itself up. It’s like when they finally got it in telephony and the cell phone was it. So I think it’s going to be a free-for-all.

Who will be NRG’s competitors in the future?

If you ask me who I worry about beating us, I give very little thought to the traditional power companies, the utilities.

One of the changes we’re talking about when you’re talking about balancing everyone’s power systems in their house is that it basically becomes an information technology-based industry. Of the big four companies that will inherit the Earth—Facebook, Google, Apple, and Amazon—the one that has shown the most interest in this space is Google. But Apple has a history of showing no interest in an area and suddenly dominating it.

The second category you look at are people who are already inside the home. I think first and foremost you look at the cable TV companies, the Comcasts and all.