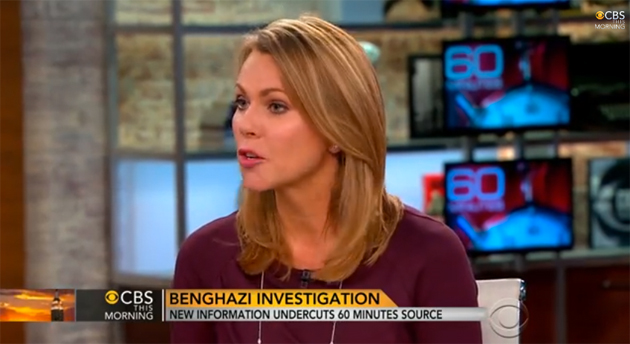 60 Minutes correspondent Lara Logan apologized on Sunday for her discredited October 27 report based on a bogus “eyewitness” account of the attacks on the US diplomatic compound in Benghazi. The mea culpa followed revelations that Logan’s main source, security consultant Dylan Davies—who claimed that he had scaled the compound’s 12-foot wall and battled terrorists—wasn’t on the scene at all, according to an account he gave the FBI. He’d also told his then-employer, the British security contractor Blue Mountain, that he had never reached the compound. Nonetheless, he somehow persuaded Logan and CBS News to accept his alternate version of heroics.

As it turns out, Davies also recounted his supposed interactions with the FBI in his recent book, The Embassy House: The Explosive Eyewitness Account of the Libyan Embassy Siege by the Soldier Who Was There, which he coauthored under the pen name Morgan Jones and published with Threshold Editions, an imprint of the CBS-owned company Simon & Schuster. The tome hit shelves two days after the 60 Minutes segment ran, though the publisher dropped it on Friday and urged retailers to yank the title from their inventories.

The section on Davies’ meeting with the FBI is full of awkward prose and comes off as wildly unrealistic, something that should’ve set off alarm bells among veteran CBS news gatherers who say they did a yearlong deep dive into the Benghazi story. Davies describes how a five-person team—three FBI agents, a State Department staffer, and “a lady in her late fifties who introduced herself as a head prosecutor from New York”—visited him at his residence in Wales* after the attack. During the meeting, he claims they asked his opinion of the special military unit that had been deployed to quell the violence—”utterly fucking useless,” was his reply—and whether he’d had security concerns prior to the attack:

“Where d’you want me to start? We had fucking loads of concerns. We—or rather the RSOs [Regional Security Officers]—detailed those concerns in numerous emails to the State Department. Nothing was ever done.” I paused. “And you know what— I feel guilty as fuck because we failed to get the security sorted, and because on the day of the race I let the RSOs down…”

The woman prosecutor stepped in now. “No, no, no—let’s be clear on one thing: you let no one down.” “Dead right,” the FBI guy added. “Without you we’d have no information at all right now. Since the attack no one has been on the ground in that compound apart from you, and we cannot thank you enough for all those photos.” “I still feel guilty that I didn’t make it over the wall the first time I tried.” I went to make them all another coffee. The lady prosecutor came into the kitchen. “Hey, you know, Morgan— you did a good thing,” she volunteered. “You did the right thing. Do not beat yourself up over this, okay? You’re a good man. A good man, you hear me?” I was tearing up. She was the motherly, kindly figure that I needed right now, and it was good of her to say those words. She stayed with me as I made the coffees, but in the background I could hear the guys firing questions back and forth at each other in hushed voices. You ask him…No, you ask him…

I took them in the tray of drinks. “Guys: Listen up. I heard you whispering. I heard you saying ask him this; ask him that. You have something you want to ask me, or that you think might upset me or is insensitive—just ask. Let’s get it out there. I will not be offended.” “No, no, man, everything is okay,” the FBI guy who’d led the questioning reassured me. “And hey, thanks for the coffees…”

It was time for the team to leave. They thanked me for all that I had done in Benghazi…They told me they’d need me to fly to the United States at some point, to give my side of the story in full. I said I’d be happy to go. Whatever it would take to try to right the wrongs perpetrated on that hellish night, and to ensure the lessons would be learned. The lead FBI agent gave me his card: “You ever need anything ever, you just call me.” The guy who was the most choked-up among them embraced me. The lady prosecutor gave me a hug as well. “You did the right thing,” she told me again. “You did the right thing.”

Davies’ improbable account of FBI agents crying and spouting grateful platitudes only underscores how negligent 60 Minutes was in vetting its story. Even if the FBI wouldn’t confirm Davies’ account, why didn’t they corroborate his tale with others who’d been there? Indeed, exactly how and why the network got so duped remains a very open question.

Correction: An earlier version of this article stated that the FBI agents visited Davies at his home in Benghazi, according to his book. In fact, they visited him at his home in Wales.