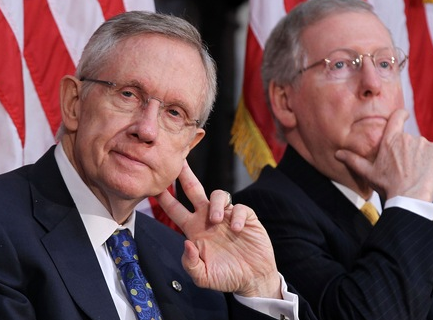 Update: TPM reports that Sen. Ted Cruz (R-Texas) has “no objections” to the Senate voting on the bill today, and will not attempt to block or delay it. He added, “There’s nothing to be gained from delaying this vote one day or two days.”

Update 2: Politico reports that the Senate will be voting first on the bill, sometime Wednesday afternoon or early evening.

Update 3: House Speaker John Boehner has released a statement about the agreement, promising to support the Senate’s bill: “Blocking the bipartisan agreement reached today by the…Senate will not be a tactic for us.”  Read the full text of the bill below

Update 5: The House of Representatives passed the bill late Wednesday night, 285-144. The bill now goes to President Obama who has promised to sign it immediately.

Update 6: President Obama signed the bill, officially making it into law. The government will open Thursday.

Senate leaders have forged an 11th-hour deal to end the government shutdown and raise the debt ceiling, and House Speaker John Boehner is expected to bring the bill up for a vote, Politico and other media outlets reported Wednesday morning. If the bill passes and arrives on President Obama’s desk by the October 17 deadline, the US government will reopen until January 15, and the debt ceiling will be raised until February 7, delaying the budgetary and debt ceiling crises and leaving President Obama’s signature health care bill largely intact.

Many concessions that tea partiers attempted to extract from the Obama administration in exchange for reopening the government and raising the debt ceiling are not expected to be included in the bill. Conservative Republicans had, over the course of the budget fight, demanded a one-year delay to Obamacare, a delay or repeal of the act’s tax on medical-device manufacturers, and a “conscience clause,” which would have allowed employers to block their employees from buying health insurance that covers birth control. None of those measures are expected to appear in the Senate’s bill. The only concession Republicans seem to have won is a slightly stricter set of rules for verifying the incomes of Americans who are receiving subsidized health insurance under Obamacare.

According to the Wall Street Journal, the final bill won’t include a GOP proposal that would stop the Treasury Department from using extraordinary measures to raise the debt ceiling. But it will include back pay for federal employees who missed paychecks during the shutdown and establish a committee tasked with working out a longer deal ahead of the new January 15 and February 7 deadlines. The bill also reportedly includes a provision that could make it harder to use the debt ceiling as a bargaining chip: At the next deadline, Congress would be required to pass a bill if it wants to block the ceiling from increasing. Otherwise, the ceiling would go up automatically.

The House is expected to vote on the proposed bill first, which would allow the Senate to skip some of its cumbersome procedures and quickly move to a final vote. Politico calls this “an extraordinarily risky play” because the majority of House Republicans are expected to oppose the bill. However, Robert Costa of the National Review reported that Boehner has agreed to pass the bill with mainly Democratic votes. There’s still a chance that Sen. Ted Cruz (R-Texas) could go rogue and filibuster the bill in the Senate, dragging out the debate past the October 17 deadline, but his office has not said whether or not he will do so, according to the Wall Street Journal.

Here is the full text of the bill.