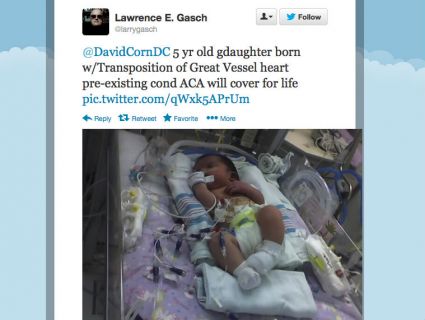 On Wednesday afternoon, as news was spreading that House Speaker John Boehner had surrendered and a no-conditions-attached bipartisan plan to end the shutdown and debt ceiling crisis would be approved later in the day by the Senate and House, Sen. Ted Cruz (R-Texas), the tea party’s disrupter-in-chief, held an impromptu press conference in a Capitol hallway to declare victory, or something like it. The fellow who led the GOP further into a PR abyss hailed the political crisis that was ending (at least for now) as “a remarkable thing” and claimed that it showed that “millions upon millions” had risen up against Obamacare. Then Cruz, the tail that wagged the Republican dog, launched into a diatribe against the Affordable Care Act: “President Barack Obama promised the American people Obamacare would lower your health insurance premiums. I would venture to say that virtually every person across this country has seen exactly the opposite happen, has seen premiums going up and up and up.”

Really? Every American in every city, town, village, and hamlet? On my Twitter feed, I called on PolitiFact.com, the highly regarded fact-checking outfit, to vet this statement. But before the truth-chasers of that site could say “pants on fire,” I started to receive tweets from Americans across the country telling tales of how Obamacare has lowered premiums for them or provided better insurance at similar rates. As these reports poured in, I retweeted the most compelling testimonials, and more pro-ACA anecdotes appeared. I also received tweets from people who noted they have benefited from Obamacare in other ways, such as receiving coverage previously denied due to preexisting conditions. In several instances, tweeps cited the ACA as life-changing, if not life-saving. (At one point, I suggested that the White House might be smart to compile such tweets under the hashtag #ACAWorks.) A few respondents did note the ACA was not working for them, and I retweeted several of those tales.

Obviously, I cannot vouch for details zapped my way by strangers. But many of the pro-Obamacare anecdotes had a similar tone: thank God for this. This was, of course, not a scientific poll or professional collection of data. No doubt, my Twitter feed probably is followed by far more Obama supporters than detractors (though sometimes I wonder about that, given all the conservative trolling on it). Yet I would venture to say that this response contradicts Cruz’s extreme claim that “virtually every person” has been hit by a premium hike due to Obamacare.

Below are some of those tweets I received. Many of these abbreviated stories are rather heartening. Imagine if they do reflect the experiences of millions of Americans. By the way, PolitiFact did evaluate Cruz’s claim. It rated his assertion “false.”

@DavidCornDC @PolitiFact Here in Maine, I can now buy Gold PPO coverage for less than a $6,500 deductible policy cost me before.

@DavidCornDC @PolitiFact My insurance hasn’t gone up or been dropped as he stated. .

@DavidCornDC my premium went down substantially

.@HitfixMelinda @terri_georgia @DavidCornDC I get insurance thru my employer. The 2014 rates were just released. Shocker – they didn’t go up

@J_L_E_ @DavidCornDC increased coverage and price down moderately on my plan. Highest possible coverage for individual in California

@DavidCornDC @PolitiFact My wife’s carrier was forced to give a rebate because they exceeded the % overhead cap.

@DavidCornDC Our company sent letter stating they thought their plan cheaper for employees but we were free to explore ACA. No change.

@DavidCornDC @PolitiFact I work for a NFP, no group plan. Under ACA,my premium is half, with maternity coverage, unheard of before ACA.

@DavidCornDC Their hlth ins. costs have gone up because their GOP governors in their respective states opted out of the exchanges.

@lorenjones @DavidCornDC Mine is United HC high-deduct through my employer. It is up 9% next year, but it seems to go up every year.

@DavidCornDC Got a rebate and small increase. Have had small to big increase for years running so long term TBD.

@DavidCornDC My mom & sister, who both have chronic health conditions, will save thousands a year due to ACA. They are excited.

@DavidCornDC @PolitiFact I’m in AZ. My premium stayed the same.

@DavidCornDC @PolitiFact That’s funny because my premiums went down.

@DavidCornDC People who held ridiculous catastrophic plans for $95/mth might see their premiums go up. But they also get actual coverage.

@DavidCornDC According to the http://t.co/20pIPmUJ9C website, my premium for a Humana policy is $400/mo less than what I was paying.

@DavidCornDC @PolitiFact my premiums are going from 850 to 650 plus a much lower deductible.

@DavidCornDC mine went up 7.4% which it always does. We were told it has nothing to do with the #ACA but is standard

@pnuts_mama @mbyhoff @DavidCornDC My premiums will go down on ACA next yr AND I’m getting a rebate from current insurer.

@DavidCornDC Some peoples insur has gone up b/c they had policies which covered almost nothing, now policies must meet minimum standards

.@DavidCornDC my sis works for the largest HMO in CA & people are signing up, renewing their policies & pleased with the subsidies

@DavidCornDC @PolitiFact My BCBS policy went down 2%. Will go down more when hubby/son get ACA (I’ll keep my policy).

@DavidCornDC my ACA story?we moved to UK in ’11 NHS is a godsend. Wife and I both had cancer and waited 5 days from diagnosis to treatment

@DavidCornDC helped a friend sign up for ACA in NY. Will pay 98/m w/no deductible. Employer plan 90/m with 1500 deductible!!

@DavidCornDC @PolitiFact The most expensive Plat ACA plan is the same price as my current Bronze-equiv. plan.

Me, type 1 diabetic, ripped off from age 21-24, parental lifeline helped, exchange will let me change jobs safely at age 26 @DavidCornDC

@DavidCornDC my sister,cancer survivor can get ins now too w/ #ACA

@DavidCornDC New Obamacare policy will cost HALF of what I have been paying! and CoveredCA made it easy to apply. GO OBAMACARE!

@DavidCornDC @BarackObama @pfeiffer44 I have spent 2 weeks trying to enroll at the ACA website. I have yet to see a single health plan.

@DavidCornDC I work for a very large Telecom company and my 2014 Insurance is exactly the same as 2013. 1st time I recall cost not going up.

@DavidCornDC Mom’s caregiver needs surgery, was dropped by her ins. co. Enrolled in #ACA, her premium is lower for better coverage in FL! (:

@DavidCornDC Work for University of California, one of the largest employers in the state, and my 2014 premium is about $12 lower than 2013

@DavidCornDC my mom couldn’t get insurance b4 ACA; has diabetes & COPD. Bc of #ACA, she’s able to get lifesaving meds, & I still have a mom.

@Glic @DavidCornDC I will save more than $400/mo through #ACA over existing COBRA plan.

@DavidCornDC I work in a small co. of 30 mostly young people; been told that premiums will increase by 32% next yr; shaken my support of ACA

@DavidCornDC @BarackObama signed up the first week in New York. Got health and dental for $195/month. No subsidies.

@BeyondKenny @DavidCornDC @BarackObama @pfeiffer44 Wonder what state he’s in?? I signed up on 1st day in Calif and saved $3,000.

@BarackObama @DavidCornDC my family will save $2400 for no deductible PPO covg thru the xchg. No subsidies apply. Obamacare helps everyone.

@DavidCornDC I have a mitral valve prolapse – a harmless heart condition. But I still couldn’t get insurance because of it. Now I can!

@DavidCornDC @BarackObama How about the unhappy campers? My SF Kaiser premiums jumped 27% under #CoveredCA to $8K. Not affordable.

@SsMokinJay @timthesocialist @DavidCornDC I don’t pay any health insurance bc I’m Canadian. Yes we pay thru our taxes – 1/2 what you pay.

@DavidCornDC I have Multiple Sclerosis and not eligible for Medicare for another year. Thanks to the ACA I can now get health Insurance!

my family of 3 can get ‘platinum’ coverage for nearly $500/mo LESS than current COBRA premium. Will be enrolling this week. @DavidCornDC