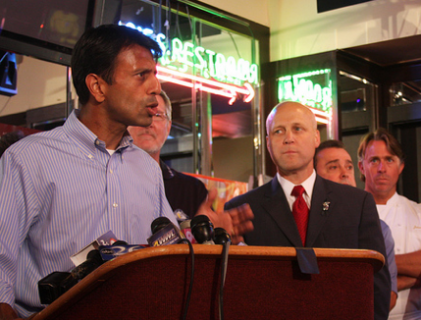 Governor Bobby Jindal (R-La.) appeared on “Fox News Sunday” last weekend to tell voters that fixing Healthcare.gov’s technical glitches is “the easy part” and “the real critical issue is when it comes time to schedule your grandmother’s cancer surgery, what’s going to happen then?” But healthcare experts say that Jindal’s fear is 100 percent unfounded—Americans over 65 are covered under Medicare—and according to the American Cancer Society, Obamacare will provide lots of benefits for cancer patients by decreasing costs and beefing up preventative care.

“This is typical right wing scare mongering,” says Dr. Jonathan Gruber, an economics professor at the Massachusetts Institute of Technology. “Obamacare has no effect on Medicare, the government program that will cover your grandmother. Indeed, your grandmother is now less likely to need cancer surgery because Obamacare provides her with a free annual checkup that can now catch the cancer before it needs surgery.”

According to the American Cancer Society, the law provides a host of benefits to cancer patients, including preventing insurers from dropping patients because they are diagnosed with cancer and providing immediate coverage to cancer patients who were uninsured for six months or more. Under Obamacare, health plans also can’t set “lifetime” limits on how much coverage patients get, and out-of-pocket costs will be eliminated for preventative screenings, like mammograms and colonoscopies.

A spokesperson for the Department of Health and Human Services also told Mother Jones that before Obamacare, insurers weren’t required to provide coverage for prescription drugs for cancer patients. Under the Act, patients will no longer face limitless costs for prescription drugs, and “a diagnosis no longer means choosing between facing bankruptcy or ignoring care.” (Jindal’s office did not respond to comment for this story.)

Jindal also appears to be giving a nod to another Republican meme—that if the government pays for healthcare, there will be rationing, long lines, and people won’t see a doctor in time. Obamacare requires health insurance companies to maintain provider networks that have enough doctors to ensure that services will be accessible without unreasonable delay. Additionally, the law includes incentives to get more providers into the healthcare system, such as establishing scholarships and loan repayment programs.

Timothy Jost, a law professor at Washington and Lee University, acknowledges that “if you make healthcare available for everybody, what that means is that some people who already have good access to healthcare, may find it a little less convenient…But is the Governor’s solution to tell millions of people they can’t have healthcare, so people with lots of money can have access?”

Tony Carrk, a policy director for the Center for American Progress, says the claim “is surprising because Gov. Jindal is trying to be the leader of the GOP and he’s resorting to Sarah Palin attacks. This is all part of the relentless GOP campaign to sabotage the law by attempting to repeal, defund, delay, misinform and misdirect, and throw anything at the wall to see what sticks.”