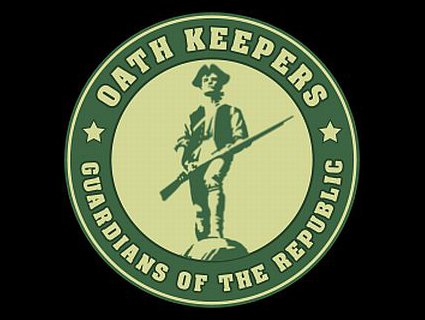 Oath Keepers, the anti-government group profiled by Justine Sharrock in our March/April 2010 issue, just got a little creepier. The group recruits active and former military members, cops, and other law-enforcement types who claim they are worried about government tyranny, but seem to be equally driven by a deep loathing of President Obama. At their gatherings, members take an oath that they will disobey “unconstitutional” orders. What’s unconstitutional is pretty much left up to the individual—even if, like it or not, this isn’t how our democracy operates.

Up until now, Oath Keepers has mainly been a bunch of pissed-off white dudes talking tough and holding meetings and rallies and so forth, but now the group is setting out to train Special Forces-esque “civilian preservation teams” to contend with the apocalyptic future they see coming to America. “We are flat running out of time and we need to get as prepared as possible as fast as possible,” the group’s founder, a lawyer named Stuart Rhodes, wrote to the group’s members. The Daily Beast‘s Caitlin Dickson has the update:

“We think this is what Americans should do anyway, but now we see that we’re seriously in a vulnerable position because most Americans don’t,” Rhodes told The Daily Beast. “After Hurricane Katrina and Sandy, we saw Americans dependent on FEMA, on a government that can’t do anything. People have been desperate, vulnerable to crime and vulnerable to dying” in such emergency situations, he said.

But it’s not a natural disaster that Rhodes thinks will catapult the country into chaos. In his email announcing the launch of the plan, Rhodes lays out the course of action he predicts “the enemy”—the government—is preparing to follow, including “intentionally triggering a catastrophic economic collapse” as a means of creating disorder that they will then use as an excuse to impose martial law, destroy the constitution and use the billions of dollars in ammunition, armored vehicles and weapons he claims the Department of Homeland Security and local police have been stockpiling “to control and contain us.”

Rhodes, who has been somewhat measured in the past, is now straying into serious wack-job territory. The group’s rhetoric is also pretty disingenuous, given Oath Keepers’ tight relationship with the tea party movement, whose faction in Congress is the one holding a gun to America’s head and threatening to put the economy at serious risk. (It’s perhaps also worth noting that American civilians already pack far more heat than the government does.)

“The US government under the reign of Barack Obama is the biggest terrorist organization around,” notes a post on Oath Keepers’ website.

A glimpse at the Oath Keepers’ website will tell you what this is really all about: A large graphic bearing the president’s face reads: “Snowden Honored His Oath…Honor Yours! Stop Big Brother!” And the site’s “featured” posts include: “Mr. Obama, Tear Down Those Walls! Veterans, Oath Keepers, and Friends Tear Down ‘Barrycades’ In D.C.,” which faults the White House for the closure of the WWII Veterans Memorial in DC while featuring a photo of tea party leader Ted Cruz—one of the federal shutdown’s primary architects—speaking to the protesters as though he were some kind of hero.

Lest there be any doubt about who the Oath Keepers’ “enemy” is, see “Bring It On: I Will Not Comply With Obamacare,” wherein Daisy Luther writes, “The government is fond of saying that they will not negotiate with terrorists. Well, neither will I—and the US government under the reign of Barack Obama is the biggest terrorist organization around.”

And Oath Keepers are preparing to do something about it. Dickson writes:

By creating civilization preservation teams now, Rhodes argues, Americans will be ready to fight back if and when that scenario plays out. These proposed 12-to-14 person groups are modeled after the U.S. Army’s Special Forces “A Team,” with two communications experts, two medical experts, two engineers, two “strategic food reserve” specialists, and four-to-six “scouts” to be trained specifically in tracking, search and rescue, wilderness survival, rifle shooting and, of course, combat.