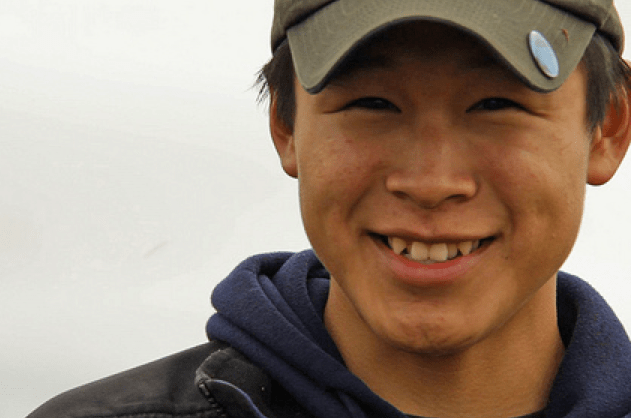 Many college students consider it an accomplishment if they beat their hangovers and make it to class on time. But last year, Nelson Kanuk, a freshman at at the University of Alaska–Fairbanks, sued his state for failing to reduce carbon emissions or slow climate change. Last week, the Alaska Supreme Court agreed to hear Kanuk’s appeal, becoming the first high court in the country to take up such a case. (You can view the full hearing, which took place in a high school auditorium, here.)

Kanuk hails from a remote Yup’ik Eskimo village called Kipnuk, which is accessible primarily via river. Due to melting permafrost, the riverbank that protects Kanuk’s family’s house from floods softened, and some 13 feet of their front yard was swallowed up by the rushing water. The family has since been forced to move about 100 miles away.

“[My village] is not really connected to the outside world, but I was always interested in what’s going on all around us, I was curious in climate change and how it was affecting us,” Kanuk says in a video put out by the environmental group helping with the lawsuit, Our Children’s Trust. “I didn’t realize how bad it was. When I finally understood what climate change was, I thought, what can I do to help?”

Kanuk’s legal argument hinges on what’s called the “public trust doctrine” which holds that there are natural resources (like lakes, or places where the states issues hunting permits) that can’t be subject to private ownership, and as a consequence, states have a responsibility to protect them so that they can be enjoyed by future generations. Kanuk and his six co-plaintiffs claim that the atmosphere falls under this doctrine, and although the air hasn’t been “threatened” before, “throughout history, law has evolved as courts respond to unforeseen, often urgent, circumstances.”

Kanuk isn’t the first person to bring a climate change lawsuit against a state—or even the first teenager. Lawsuits are also pending in 12 other states, including Montana, Colorado, Iowa, Minnesota, Arizona, New Mexico, Washington, Kansas, Pennsylvania, Oregon, and also in federal court. The environmental group working with Kanuk, Our Children’s Trust, has been helping teens bring many of these lawsuits, and in Kansas, the plaintiff was only 14. But so far, only a trial court in Texas has backed the plaintiffs and the case is now facing appeal, according to Alaska Public Media. A decision in Kanuk’s case is expected in a few months.