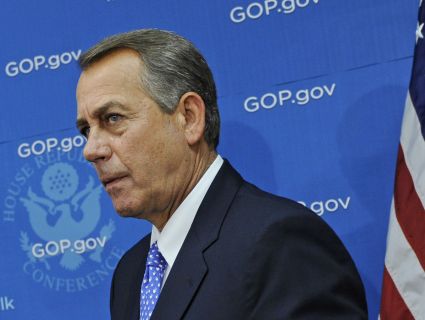 About two weeks ago, as tea partiers in the GOP-controlled House were forcing a government shutdown, some House Democrats sent a private and informal message to House Speaker John Boehner: If you need to break with the die-hard conservatives of your caucus to keep the government running and avoid a debt ceiling crisis, we might be able to try to help you protect your speakership, should far-right Republicans rebel and challenge you. This offer was conveyed to Boehner just as he was entering what has turned into the toughest stretch of his speakership, according to two senior House Democratic lawmakers who each asked not to be identified.

Throughout the latest showdown over government spending and the debt ceiling, political observers have noted that Boehner was in a fix because of the stubbornness of a band of 40 or so tea party firebrands within his caucus who have been egged on by Sen. Ted Cruz (R-Texas). These lawmakers were committed to a hostage-taking strategy (no government funding or boost in the debt ceiling, unless Obamacare was smashed and/or government spending was further slashed), and they could mutiny against Boehner were the speaker to forge a bipartisan compromise that bypassed them. There are 232 Republicans in the House—with 218 usually required for a majority—and simple math suggested that if 15 or so of the GOP radicals abandoned Boehner, he could lose his cherished top-dog position. Under House rules, a speaker can be challenged any time with a motion to vacate the speakership, and such a motion is privileged, meaning it zooms to the House floor, without winding through any committee, cannot be blocked by a speaker or his allies, and is subject to a full vote of the House.

But on Capitol Hill, math is not always simple. It would take only a single rebellious tea partier in Boehner’s caucus to force a vote on a motion to boot Boehner. But such a bill, requiring a majority to pass, would probably need Democratic votes to succeed. If Boehner had the backing of half of his caucus (116 members), the coup-makers would only win if Democrats joined their effort to create a bipartisan, anti-Boehner majority. But if the Dems sat out this fight—by voting present or not showing up at all—Boehner could keep his balcony, as long as the mutinous tea partiers could not enlist a majority of the House GOP. In a much more improbable scenario, Democrats could actively protect Boehner by voting to retain him as speaker (that is, voting against the motion to vacate). If such an unlikely event were to occur, Boehner could lose the support of more than half his Republican comrades and still retain the speakership.

As things look now, a tea party uprising in the House against Boehner would not be a guaranteed success. Boehner appears to have support from much of his caucus, which includes legislators who are angered by the tea partiers’ to-the-brink tactics and lawmakers who just like Boehner. There’s no clear sign that the Cruz-controlled faction within Boehner’s ranks could win over their colleagues for an attempt to oust Boehner. And there would be the tricky matter of finding a successor. The 1997 coup against then-Speaker Newt Gingrich failed partly because the plotters could not agree on his replacement. If the tea partiers did manage to throw Boehner from the train, he could run for speaker again. In that event, Boehner could stage a comeback by obtaining the votes of 201 of his 232 GOP colleagues, enough to overcome the 200 Democratic votes that would presumably go to Democratic leader Nancy Pelosi. This assumes none of the mad-as-hell tea partiers opposing Boehner would go so far as to vote with the Dems for Pelosi. (The vote for a new speaker is held by all members of the House, and the winner needs an absolute majority of the votes cast.) Or here’s a twist: In the vote for a new speaker, the Democrats could take another walk—which would lower the number of votes Boehner would need for restoration.

The bottom line: The tea partiers would not be in full control, if they were to initiate an anti-Boehner effort. Pelosi and her Democrats could have opportunities to affect the outcome. Certainly, Boehner would be loath to accept any assistance—even passive help—from the Democrats. It would compromise him greatly within GOP and conservative circles and dramatically undermine his already diminished ability to control his GOP crew. If it appeared that Boehner had made any common cause with the Ds, a small mutiny could turn into a wider revolt. Instead of retaining his speakership due to Democratic machinations, Boehner might well prefer to skedaddle to days of well-paid lobbying and nights of fine wine.

So how did Boehner respond to the message? “He said, ‘I’ll get back to you,'” a senior House Democrat says. Asked to comment on this informal offer, Michael Steel, Boehner’s spokesman, said, “That’s silly.”