Over the weekend the world’s largest boiling-water nuclear reactor, Sweden’s Oskarshamn plant, was paralyzed after a bloom of moon jellyfish clogged plant’s cooling systems, forcing it to shut down. According to the New York Times, the jellyfish had been cleared out of the plant’s pipes by Tuesday, and engineers are preparing to restart the reactor. Odd as it sounds, this is actually a pretty common problem (yes, really).

“The last time this happened [at this plant] was in August 2005, when we had to shut down Oskarshamn-1 because of a jellyfish invasion,” a spokesperson for EON SE, the company that co-owns the plant, told Bloomberg. “This situation is caused by a huge amount of jellyfish, just one is definitely not enough to cause problems.”

Jellyfish blooms—the term for giant swarms of jellyfish—have also been responsible for nuclear shut downs in California, Florida, Israel, Scotland, India, and Japan, where one plant has reported removing as much as 150 tons of jellyfish from its system in one day. In 1999, a jellyfish bloom clogged the cooling system of a major coal-fired plant in the Philippines, leaving 40 million people without power. And in 2006, in a nigh unprecedented act of aggression, jellyfish in Brisbane, Australia, afflicted the massive nuclear-powered USS Ronald Reagan with an “acute case of fouling,” clogging its cooling systems and forcing it to leave the harbor.

Scientists at Korea’s Advanced Institute of Science and Technology (KAIST) have come up with one solution to the jellyfish problem: build robots to kill them. For the last three years, the team has been working to create robots that can travel the ocean, seeking out swarms of jellyfish using a camera and GPS. Once the jellyfish are located, the robots set about shredding the jellies with an underwater propeller, according to KAIST and IEEE Spectrum.

This is what the robots look like on the surface. They roam in a group of three: 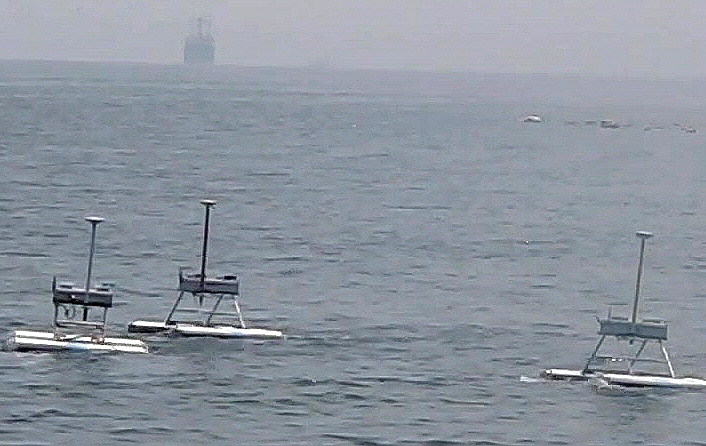 And the video at top is what they’re doing beneath the surface, using a specialized net and propeller. Be warned, it’s graphic.

In preliminary tests, the robots could pulverize 2,000 pounds of jellyfish per hour, KAIST says. The team sees other uses for autonomous sea-faring robots, too, such as marine waste removal.

Scientists have found that jellyfish are surprisingly resilient in the face of changing oceans. Though ocean acidification—caused by the uptick of carbon in the atmosphere being absorbed by the oceans—is harming coral reefs and imperiling shellfish, jellyfish are thriving. Prodigious blooms have decimated fish populations in the Gulf of Mexico, the Black Sea, and in southern Africa, where a 30,000 square-mile swarm has been described as a “curtain of death” and “a stingy-slimy killing field.” Still, some scientists argue that jellyfish populations fluctuate naturally and that there hasn’t actually been a significant increase.

In Stung! On Jellyfish Blooms and the Future of the Ocean, biologist Lisa-ann Gershwin argues that human activities are damaging the world’s oceans and paving the way for a jellyfish explosion:

The 1,400-megawatt unit at Oskarshamn should be back at full capacity sometime this week, according to National Geographic. But if Stung!? is right, we might have much bigger problems to worry about soon. These jellyfish-shredding robots might just be our last, best hope.