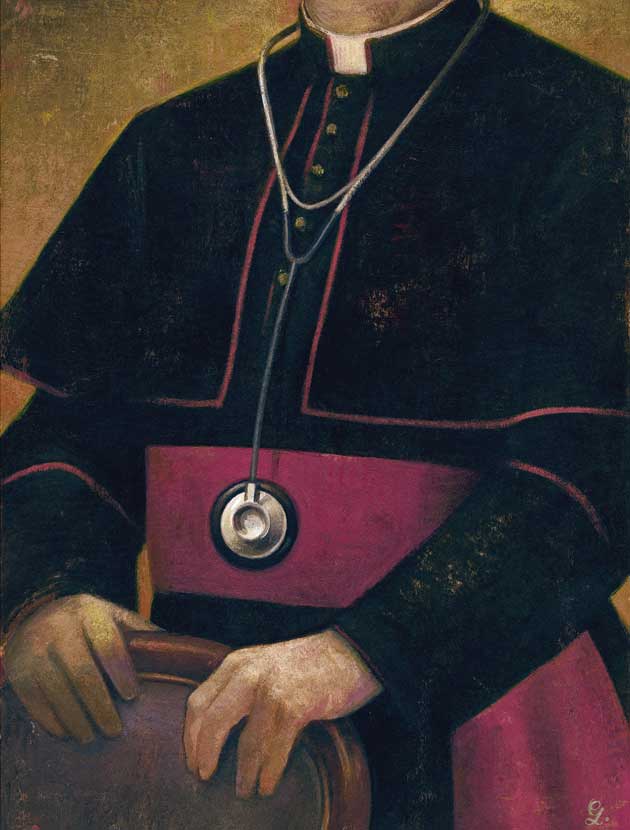 One morning in November 2010, an ambulance brought a woman who was 15 weeks pregnant to the emergency room at Sierra Vista Regional Health Center, 70 miles outside Tucson, Arizona. She had been carrying twins and had miscarried one at home in the bathtub. The chances of the second fetus making it were “minuscule,” Dr. Robert Holder, the OB-GYN on call that day, later recalled in an affidavit. He told the woman and her husband that trying to continue the pregnancy would put her at risk of severe bleeding and infection. In short, she needed an emergency abortion.

But there was a problem: Sierra Vista was in the midst of a trial merger with a Catholic hospital company, Carondelet Health Network, which required its doctors to abide by the church’s ethical and religious directives. Hospital administrators told Holder that because the surviving fetus still had a heartbeat, he could not perform an abortion. Holder had to send the patient to a hospital in Tucson—a three-hour delay that he believed put her at risk for life-threatening complications.

The doctors at Sierra Vista aren’t the only ones to struggle with submitting their medical decisions to a higher authority. A growing number of patients are finding their health care options governed by the church’s guidelines as Catholic hospitals, long major players in the health care market, have been on a merger streak, acquiring everything from local hospital systems to medical practices, nursing homes, and health insurance plans.

Between 2001 and 2011, the number of American hospitals affiliated with the Catholic Church grew 16 percent, even as the number of public hospitals and secular nonprofit hospitals dropped 31 percent and 12 percent, respectively, according to an upcoming report by the American Civil Liberties Union and MergerWatch, a nonprofit that tracks religious health care mergers. In 2012, Catholic hospitals and health care systems were involved in 24 mergers or acquisitions, according to Irving Levin Associates, a market research firm. Ten of the 25 largest nonprofit hospital systems in the country are Catholic, and Catholic hospitals care for 1 in 6 American patients. In at least eight states, 30 percent or more of patient admissions are at Catholic facilities.

Ten of the 25 largest nonprofit hospital systems in the country are Catholic, and Catholic hospitals care for 1 in 6  patients.

Catholic hospitals are required to follow health care directives handed down by the US Conference of Catholic Bishops—a group of celibate older men who have become increasingly conservative over the past few decades. (Recall the bishops’ ongoing showdown with the White House over Obamacare’s requirement that health insurance plans cover contraception.) The issues go far beyond abortion. The bishops’ directives restrict how doctors in Catholic hospitals may treat everything from miscarriages to terminal illness. How this treatment differs from that of secular hospitals is not always disclosed to patients.

“When you go into a hospital or an ER, you do not think that there’s a bishop between you and your doctor,” says Linda McCarthy, CEO of a Planned Parenthood branch in western Washington. In 2010, Peter Sartain, a prominent bishop recently enlisted by the church to crack down on nuns deemed too liberal, was appointed to the Seattle diocese. Not long afterward, he told the Catholic hospital in McCarthy’s area to stop performing lab work for Planned Parenthood that the hospital had handled for at least a decade, including tests unrelated to abortion, such as cholesterol screenings. McCarthy publicized the demand and the hospital backed off, for the time being.

“The Catholic bishops are seizing an opportunity to control the health care we all pay for, and they’re being wildly successful,” says Monica Harrington, the co-chair of Washington Women for Choice. A spate of proposed deals could leave Catholic facilities accounting for 50 percent of the state’s hospital admissions. “We could very well end up with three conservative bishops overseeing health care for 6 million people,” McCarthy says.

Abortion services are always quick to go when a Catholic hospital takes over, but the changes go much further. In many cases, doctors are prohibited from prescribing birth control, and hospital pharmacies won’t sell it. Doctors may even be told not to counsel patients about it. Catholic hospitals have been reluctant to offer emergency contraception to rape victims, and when they do, they first require a pregnancy test to ensure the woman was not pregnant before the assault. The bishops’ guidelines forbid tubal ligations and vasectomies. They also extend to end-of-life care: Catholic hospitals may ignore patients’ requests to be removed from feeding tubes or life support, even if those wishes are expressed in living wills. And many states allow religious hospitals to discriminate against gays and lesbians, both as employees and as patients.

Hospital mergers have let the bishops  accomplish in practice what they haven’t been able to achieve through politics: making abortion and contraception harder to access.

Dr. Bruce Silva, an OB-GYN at Sierra Vista, remembers that during his hospital’s trial merger, church officials told doctors they could give chemotherapy to a pregnant woman with breast cancer, “even though you know it will kill the baby—but you can’t give her a termination before, because that would kill the baby directly.” Sierra Vista ultimately rejected the merger.

Catholic hospitals’ treatment of miscarriage often diverges from the generally accepted standards of care followed in secular hospitals, according to Lori Freedman, an assistant professor of obstetrics at the University of California-San Francisco who published a study on the subject in 2012. Doctors told her about being forced to wait to intervene until a woman was at life-threatening risk. “We often tell patients that we can’t do anything in the hospital but watch you get infected,” one said.

The church also won’t allow doctors to terminate ectopic pregnancies until a woman is in mortal danger. In these pregnancies, the embryo implants outside of the uterus, most often in a fallopian tube, where it grows and can rupture the tube, potentially causing fatal bleeding. The bishops consider ending these unviable pregnancies a “direct abortion” unless a woman’s life is immediately at risk. A doctor quoted in a recent study commissioned by the National Women’s Law Center (NWLC) reported seeing several near-fatal tubal ruptures at her Catholic-affiliated hospital.

Despite the dangers such policies pose to patients, Catholic hospitals often do not explain them to patients, and hospitals have fought efforts to require disclosure. The NWLC has accused Catholic hospitals of ignoring “their legal obligations to disclose all treatment options” under Medicare and Medicaid. As a result, “women don’t always know what has happened,” says Kelli Garcia, senior counsel at the NWLC. “So if their tube ruptures, they don’t necessarily know that they could have had different treatment—because what happens within the Catholic hospitals, not only are they not providing treatment, they also aren’t providing information about the treatment.” The conference of bishops and the Catholic Health Association, which represents more than 600 hospitals, did not respond to requests for comment.

Even doctors who help women get pregnant are affected by the bishops’ guidelines, which ban any infertility treatment that “separates procreation from the marital act.” That includes in vitro fertilization, artificial insemination, or the use of donor eggs or sperm. Dr. Michael Thomas, a reproductive endocrinologist, had to close his practice in Kentucky and move across the river to the University of Cincinnati after the hospital he was affiliated with merged with a Catholic institution. Thomas says many people didn’t realize the merger would affect not just abortion, but “a couple’s ability to get pregnant in the state of Kentucky.”

“The Catholic bishops are seizing an opportunity to control the health care we all pay for, and they’re being wildly successful.”

What happens if hospitals refuse to follow the bishops’ directives? In 2009, doctors at St. Joseph’s Hospital and Medical Center in Phoenix performed a life-saving abortion for a seriously ill mother of four. Afterward, the city’s bishop excommunicated a nun on the ethics committee who had approved the procedure. He then demanded that the hospital sign an agreement promising to never again provide emergency abortion care, even when a woman’s life was at risk. Hospital administrators believed the agreement violated a federal law requiring hospitals to provide emergency treatment and refused to sign, so the bishop stripped the facility of its Catholic affiliation. The following year, a bishop revoked the Catholic status of a hospital in Bend, Oregon, that refused to stop performing tubal ligations.

In the face of blocked deals and growing opposition from women’s and civil liberties groups, some hospital officials have downplayed the mergers’ impact on reproductive care, even arguing that Planned Parenthood will take up the slack. A Washington hospital actually built a $2 million PP facility next door to facilitate its merger with a Catholic hospital. But Planned Parenthood can’t replace hospitals for medically sensitive abortions, says Sheila Reynertson, the advocacy coordinator at MergerWatch: “They’re in the hospital for a reason.”

In the end, hospital mergers have allowed the bishops to accomplish in practice what they haven’t been able to achieve through the political process: making abortion and contraception harder to access. In Wisconsin, for example, where nearly 30 percent of hospitals are Catholic, the Legislature passed a law requiring doctors who perform abortions to have admitting privileges at a local hospital. Because Catholic hospitals haven’t granted those privileges on religious grounds, many of the state’s abortion providers will not be able to meet the new requirements.

These types of conflicts will only grow as the merger trend continues. “Pretty soon, people may find that the only hospitals in their area are Catholic. And, regardless of their own religious beliefs, they will be unable to get the care they need,” says the NWLC’s Garcia. “It is going to be a real wake-up call.”