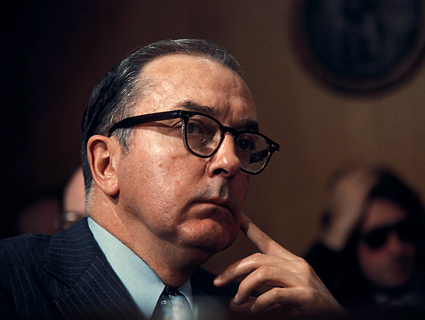 Texas Sen. Ted Cruz started off his Wednesday speech on foreign policy at the conservative Heritage Foundation with a confession: His first political contribution was a $10 contribution to the late Sen. Jesse Helms (R-N.C.), when he was 10. Then he followed it up with a plea. “We need 100 more like Jesse Helms,” he said.

That Cruz would praise Helms while delivering Heritage’s annual Helms Lecture is hardly unusual. And the two do share an extreme skepticism of the international community—Helms as chair of the Senate Foreign Relations Committee; Cruz as Texas’ first solicitor general. But Helms, who passed away in 2008, was an emblem for more than just conservatism. At a time when Republicans—including Cruz—are emphasizing the need to broaden the party’s base, the first-term lawmaker and rumored presidential candidates is embracing one of the upper chamber’s most notorious bigots.

Helms is perhaps best known for his 1990 “Hands” ad, which helped push him past his Democratic challenger, African-American Charlotte mayor Harvey Gantt. But Helms’ proud bigotry cut much deeper, and with devastating consequences for public policy. Helms believed gays were “weak, morally sick wretches” and argued that “there is not one single case of AIDS in this country that cannot be traced in origin to sodomy”—motivating factors behind his push to block funding for research into HIV at a time when the epidemic was killing tens of thousands of people in the United States alone. He described AIDS education as “so obscene, so revolting, I may throw up.” Jesse Helms was a bad person in a uniquely terrible way that increased pain and suffering for countless individuals. He even opposed appointing lesbians to high-ranking government offices. (Cruz, for his part, criticized a 2012 GOP primary opponent for attending a gay pride parade.)

Helms’ racism was unmatched on Capitol Hill. He got his political start by bashing interracial marriage and accusing the spouse of a political opponent of dancing with a black man. As a senator, he blasted the Civil Rights Act as “the single most dangerous piece of legislation ever introduced in the Congress” and dismissed the University of North Carolina–Chapel Hill as “the University of Negroes and Communists.” In 1983, he filibustered the 1983 effort to create a Martin Luther King Jr. national holiday. The infamous “Hands” ad almost felt gratuitous.

And then there’s this: Shortly after Carol Moseley-Braun became only the second African-American since Reconstruction to be elected to the Senate in 1993, she got an elevator with Helms and Utah Republican Sen. Orrin Hatch. Helms began singing the opening lines of “Dixie,” and then he turned to Hatch: “I’m going to make her cry,” Helms said. “I’m going to sing ‘Dixie’ until she cries.”