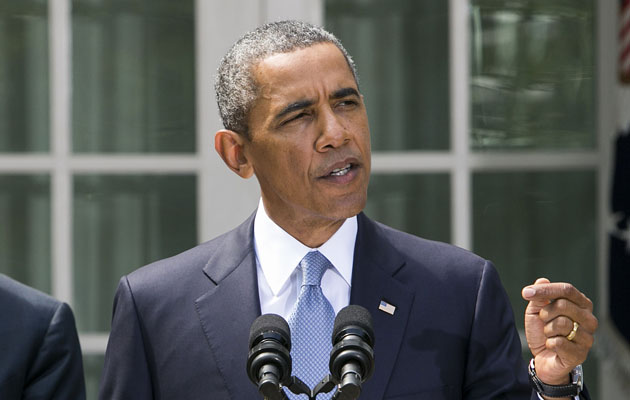 President Barack Obama has a tough task this week, as he seeks to win congressional support—particularly among his skeptical Democratic comrades—for a limited military strike on Syria in retaliation for the regime’s presumed use of chemical weapons. But as the White House tries to whip up support on Capitol Hill and within the public at large, it is conveying something of a mixed message.

On Monday morning, UN ambassador Samantha Power was on NPR, as part of the administration’s full-court press. A onetime journalist who won a Pulitzer Prize for a gripping book on modern genocides, Power is a particularly effective spokesperson for Obama on an issue concerning mass murder and humanitarian imperatives. She was asked about GOP Rep. Tom Cole’s opposition to the resolution authorizing the president to strike Syria. Cole has argued that the Syria conflict is “particularly intractable and particularly nasty. It’s a war on many levels. A civil war, a religious war, a proxy war between the Iranians and the Saudis.” He contends that there is “no direct security threat to the United States” or its allies and that limited strikes “are not likely to work.” Power replied:

President Obama does not want to get involved in this conflict. He wants to degrade Assad’s capability of using his [chemical] weapon[s] and affect his cost-benefit calculus because he will use again and again and again. And it’s only a matter time before these weapons will fall into the hands of nonstate actors, again imperiling some of our closest allies in the region, but also in the long term hurting the United States.

The key part of that answer was her assertion that the president seeks to stay out of the conflict in Syria. But that’s not what the resolution passed last week by the Senate foreign relations committee says. Section 5 of the resolution presents a “statement of policy”:

(a) CHANGING OF MOMENTUM ON BATTLEFIELD.—It is the policy of the United States to change the momentum on the battlefield in Syria so as to create favorable conditions for a negotiated settlement that ends the conflict and leads to a democratic government in Syria.

(b) DEGRADATION OF ABILITY OF REGIME TO USE WEAPONS OF MASS DESTRUCTION.—A comprehensive United States strategy in Syria should aim, as part of a coordinated international effort, to degrade the capabilities of the Assad regime to use weapons of mass destruction while upgrading the lethal and non-lethal military capabilities of vetted elements of Syrian opposition forces, including the Free Syrian Army.

And Section 6 of the resolution calls for the United States to work for a negotiated political settlement in Syria by providing “all forms of assistance to the Syrian Supreme Military Council and other Syrian entities opposed to the government of Bashar Al-Assad that have been properly and fully vetted and share common values and interests with the United States.”

Though these parts of the resolution are closer to recommendations than authorizations of specific actions, they do put the Obama administration on record as being involved in the conflict, if only by assisting one or more of the warring factions. And, of course, Obama in June authorized the CIA to covertly train and arm supposedly moderate rebel forces in Syria—though the CIA has reportedly not yet begun handing out weapons to opposition forces. (The program may soon be turned over to US special forces.)

So the United States is already involved in the conflict. When Power insists that the president does not want to get involved, what she really means is deeply involved (as in, with combat troops). This parsing shows how complicated the situation is, and how difficult it is for the White House to present a clear message. Obama wants to launch a military assault to deter Assad from the use of chemical weapons, but he doesn’t want to defeat Assad; he wants to steer clear of participation in the wider conflict, though he is providing support to players in that ongoing civil war. The White House can certainly defend such a policy, given the complexities of the situation, but it does contain a fair bit of yin and yang. No wonder many of his own Democrats have yet to rally to Obama’s call.