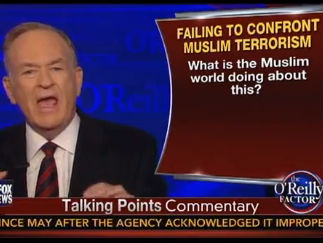 On Saturday, the popular Westgate Mall in Nairobi, Kenya, was the target of a horrific terrorist attack. Al-Shabaab, an Al Qaeda-affiliated Somali group, claimed responsibility for the assault, which reportedly left over 60 people dead. It is Kenya’s worst terrorist attack since 1998. And Fox News personalities don’t feel as though Muslims, both foreign and domestic, have done enough to condemn the killing.

“They are not the religion of peace…You moderate Muslims out there…the time has come for you to stand up and say something!” Bob Beckel, one of the network’s leading center-left stereotypes, howled on Monday. “And I will repeat what I said before: No Muslim students coming here with visas, no more mosques being built here until you stand up and denounce what’s happened in the name of your prophet…The time has come for Muslims in this country, and for other people around the world, to stand up…and if you can’t, you’re cowards!”

Fox host Bill O’Reilly—a man who has successfully drawn the link between same-sex marriage and dudes marrying small turtles—was similarly annoyed. “What is the Muslim world doing about it? Nothing!” he declared, before talking about Muslims and violence in Pakistan, Iran, Yemen, and elsewhere.

First off, it’s bizarre to present the global Muslim community as monolithic, and then shout at Muslims for not doing something. There are a lot of different branches and schools of Islam in a lot of different parts of the world. Angrily asking one kind of “moderate Muslim” in one far corner of the world to stand up to an act of terror in Nairobi is a lot like asking him or her to stand up to the epidemic of gun violence in Chicago. But let’s forget that for a moment, and assume for the sake of argument that you can and should scream at the “Muslim world” about their supposed lack of courage.

CAIR: On Sunday, the Council on American–Islamic Relations—a controversial DC-based Muslim advocacy group that is frequently the target of conservative ire—condemned the Nairobi mall attack. “We strongly condemn this cowardly attack by al-Shabab and offer condolences to the loved ones of those killed or injured,” CAIR announced in a statement. “Our nation should offer whatever assistance we can to Kenyan authorities as they seek to free the hostages and bring to justice all those responsible for this heinous crime.”

Muslim leaders in Kenya: From the Standard, one of Kenya’s biggest newspapers:

Muslim leaders have strongly condemned the terror attack by the Al-Shabaab, terming them barbaric terrorists who do not represent the religion or its faithful.

Leaders of major Muslim organisations said the Somali-based militia was trying to spark sectarian conflict between Kenyans of different faiths by claiming they are acting on behalf of Muslims and Islam.

Secretary-General of the Supreme Council of Kenya Muslims Adan Wachu said the wanton and indiscrimate killings of innocent men, women and children goes against all Islamic teachings and tenets…Al Amin Kimathi, convenor of the National Muslim Human Rights Forum, said the government should pursue the terrorists robustly, terming their actions indefensible and reprehensible.

The article includes a list of several other Muslim leaders who came out to condemn the attack.

The president of Somalia. On Monday, President Hassan Sheikh Mohamud delivered a speech at Ohio State University, where he stressed his government’s commitment to waging war on al-Shabaab. “Today, there are clear evidences that al-Shabaab is not a threat to Somalia and Somali people only—they are a threat to the continent of Africa, and the world at large,” he said. (Also, Mohamud allows America to violently drone his country in the hunt for Muslim extremists, so it’s possible that that could be considered the “Muslim world” doing something “about it.”)

A bunch of Somali-Americans. Via NBC News:

[I]n Minnesota—which has the largest concentration of Somalis in the [United States]—community leaders held a press conference at the Abubakar As-saddique Islamic center in Minneapolis to publicly denounce al Shabaab as Muslims.

“Al Shabaab—they are nothing but criminals,” said imam Ibrahim Baraki. “They are not Muslims. They have deviated from the teaching of Islam. Their main goal is to destabilize and create chaos in the world.”

This website in particular is absolutely loaded with examples of Muslims denouncing and working against Islamic terrorism and extremism. The examples are extraordinarily easy to find.