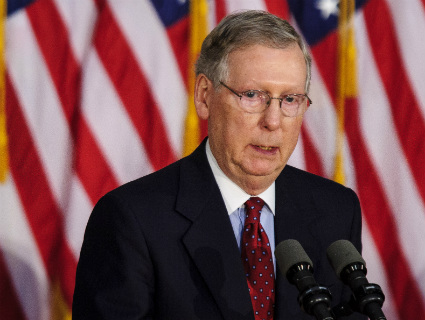 As Congress debates whether to authorize President Barack Obama’s plan to strike the Bashar al-Assad regime in Syria, leading Republican and Democratic lawmakers have staked out clear positions supporting or opposing the attack. One glaring exception is Senate Minority Leader Mitch McConnell. The Kentucky Republican, who faces a bruising reelection fight in 2014, has so far done no more than request more information from Obama. “While we are learning more about [Obama’s] plans, Congress and our constituents would all benefit from knowing more about what it is he thinks needs to be done—and can be accomplished—in Syria and the region,” McConnell said on Tuesday.

McConnell’s muted comments on Syria aren’t surprising. The debate has him in a bind. The House Republican leadership backs Obama’s call for a limited strike in response to the Assad regime’s presumed use of chemical weapons, as does Senate Majority Leader Harry Reid (D-Nev.). But McConnell’s Republican primary opponent, Matt Bevin, opposes any Syrian intervention, and Republican Sen. Rand Paul, the junior senator from Kentucky and tea party darling to whom McConnell has been paying plenty of political deference, is leading the charge against the resolution. Moreover, the grassroots conservatives and tea partiers McConnell has heavily courted since launching his reelection bid feel the same way. And tea party leaders in the state have a blunt warning for McConnell: Vote for an attack on Syria, and your already dismal standing among our ranks will decline further.

Bobby Alexander, the chair of the Central Kentucky Tea Party Patriots, says McConnell’s refusal to take a clear position on Syria thus far has damaged him in the eyes of Kentucky tea partiers. Alexander notes that the McConnell campaign’s efforts to brand its candidate “Leader Mitch”—to emphasize his standing in Washington—has been undercut by McConnell’s refusal to speak plainly about his position on Syria. “Conservatives in Kentucky do not want us involved in Syria,” Alexander says. “When we take a position like that, we want our elected officials to support that position. So far, he has failed to do that.” (McConnell’s office did not respond to a request for comment.)

Alexander, who opposes McConnell, considers the minority leader’s ducking of the issue emblematic: “That’s a very common theme of his operation: See which way the wind’s blowing, see which way is most advantageous for his reelect, and once he’s figured that out, he’ll vote and say this is why I voted for it or against it.”

Alexander and other Kentucky activists plugged into the movement insist tea partiers in the state overwhelmingly oppose bombing Syria. “The things I’m seeing and emails I’m getting from folks around the state, they’re not in favor of it,” says John Kemper, a Lexington-based activist with the United Kentucky Tea Party. “They’re posting anti-war messages and images on the their Facebook account and sending articles out about why we shouldn’t be over there.”

That skepticism is shared by national tea party organizations with access to millions of volunteers and small-dollar donors. “In Syria, it’s very difficult to find an American interest,” Sal Russo, who runs Tea Party Express, told the Hill. “That’s what hits the nerve within the general tea party—excessive use of the president’s power.”

McConnell can expect much howling from the conservative grassroots in Kentucky if he votes in favor of bombing Syria. “It will probably motivate us and encourage us to step up our efforts to put him in the ‘Senator Retired’ line next year,” Alexander says. “Though I’m not sure that we could work a lot harder than we’re already working.”

John Kemper, the United Kentucky Tea Party activist who also opposes McConnell, says he could see Bevin, the wealthy, tea-party-backed Republican running against McConnell, making use of a McConnell “yes” vote in the Kentucky’s GOP primary in May 2014, the first competitive primary of McConnell’s 26-year Senate career. “If I was running against McConnell and he voted for these strikes, I would certainly make the case that Sen. McConnell is willing to send our young men and women into harm’s way even though we weren’t impacted by it,” he says. “It would be an unconstitutional use of our military.”

However the Syrian conflict plays out, Eric Wilson, who founded the Kentucky chapter of the Glenn Beck-inspired 9/12 Project, says he expects the Syria vote to be used as a political battering ram. Unlike other tea partiers in Kentucky, Wilson doesn’t think the decision to attack Syria breaks cleanly along partisan or ideological lines, and he says there’s no one clear answer for how McConnell should vote if he wants to appease his base. Polling shows that Republican voters nationwide are split on what to do in Syria.

Since launching his campaign, McConnell’s attempts to buddy up with Sen. Rand Paul complicate his position on Syria. The more Paul plays a prominent role in the debate—he has pledged to filibuster a vote in the Senate to authorize missile strikes—the less room McConnell has to maneuver.

If McConnell should choose to support a military action in Syria, it would be the third strike against him for the conservative base, asserts David Adams, a Kentucky activist who ran Paul’s 2010 campaign during the GOP primary and who wants McConnell out. The first was the deal he cut in January with Vice President Joe Biden, which raised the debt ceiling and increased taxes on wealthy Americans. The second was voting to fund the government in March, which included money for Obamacare. “The question is, is Sen. McConnell ready to run through this gauntlet where he betrays conservative principles three times in a row in very rapid succession?” Adams asks.

Adams offers this piece of advice to McConnell: Quit. Rather than “thread the needle” on upcoming legislative fights including a new budget extension to fund the government and an agreement to raise the debt ceiling, Adams says McConnell should hang up his spurs. “He needs to take this opportunity to declare a good long career over and get out of the way,” he says, “so we can get on with selecting a US senator who is worthy of the people of Kentucky.”