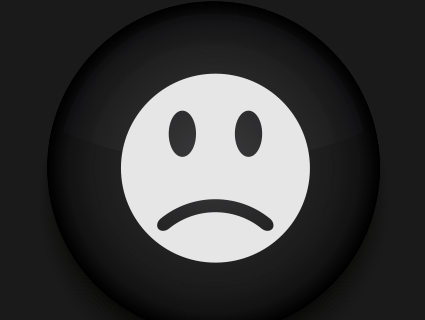 The US economy added 169,000 jobs last month, according to new numbers released Friday by the Labor Department, and the unemployment rate fell a tenth of a percent to 7.3 percent. But don’t be fooled. As has been the case in recent months, the unemployment rate fell mostly because more Americans stopped looking for work, and so were not officially counted as unemployed by the government. The jobs situation may actually be even worse than it was earlier this year.

In August, there were 312,000 fewer people in the labor force—defined as people who are either looking for a job or have a job; the size of the labor force is at its lowest level since 1978. And as of last month, 7.9 million Americans who wanted full-time work could find only part-time gigs. When you include these workers and those who have stopped looking for work, you get an underemployment rate of 13.7 percent.

The number of new jobs added to the economy per month has been on a downward trend over the past year. We averaged 148,000 new jobs a month for the last three months, but 160,000 jobs a month for the last six months, and 184,000 a month over the last year, Neil Irwin points out at the Washington Post. In order to make up for the jobs gap created by the recession within the next four years, about 300,000 jobs would need to be created per month, according to the Brookings Institution.

The jobs we are adding to the economy are of pretty poor quality; they are largely low-wage, service sector jobs in the health care, retail and food industries.

The unemployment rate for minorities remains disproportionately high: 13 percent for blacks, and 9.3 percent for Hispanics.

And yet the administration has been pointing to the falling unemployment rate as evidence of a recovery, and the Federal Reserve is expected to soon pull back on its stimulus measures in response to the superficially sunny jobs numbers. As Irwin writes, the administration seems to be ignoring the big picture: “[This job report] has enough signs of weakness embedded in enough places that it has to make economy-watchers—including those at the Federal Reserve who meet in less than two weeks—reassess their confidence that a solid, steady jobs recovery is underway… You don’t have to squint hard to see evidence that the ‘nice, steady improvement’ theme that has been the conventional wisdom is missing part of the story.”

It doesn’t look like jobs will come rushing back any time soon. The across-the-board budget cuts known as sequestration that went into effect in March are one reason. As my colleague Kevin Drum pointed out in July, “a rough horseback guess suggests that the total effect of our austerity binge has been a GDP reduction of 2 percent and an employment reduction of nearly 3 million.”

And the coming fiscal battle in Congress could make matters worse. Republicans are threatening to refuse to raise the nation’s debt ceiling when we reach our borrowing limit in mid-October unless President Barack Obama agrees to more spending reductions. Last month, Treasury Secretary Jack Lew warned against this tactic. “What we need in our economy is some certainty,” he said. “We don’t need another self-inflicted wound.”

Especially because there isn’t much justification to continue shrinking spending—the deficit has shrunk by hundreds of billions of dollars in recent years. Via Drum: 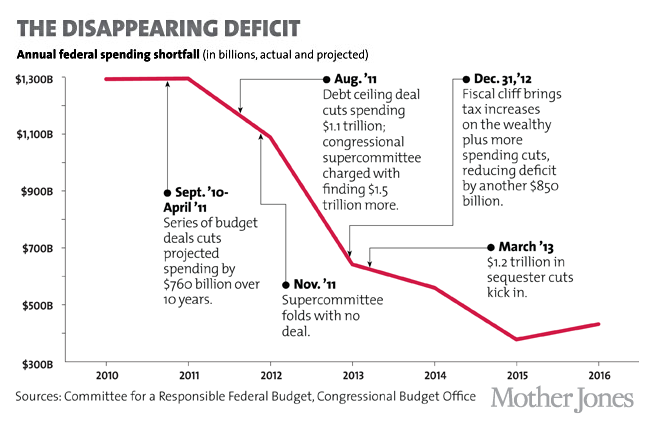