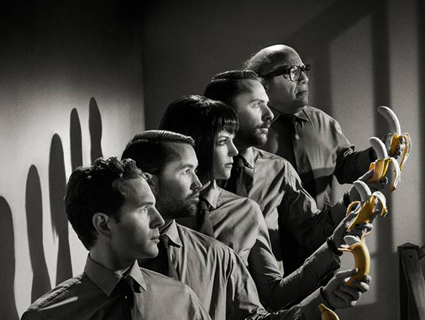 “The Gang” is back for its ninth season of dedicated nihilism and political incorrectness.

The new season of It’s Always Sunny in Philadelphia premiered last Wednesday, this time on FX’s newly launched spin-off channel FXX. The series—starring Charlie Day as Charlie, Glenn Howerton as Dennis, Rob McElhenney as Mac, Kaitlin Olson as Dee, and Danny DeVito as Frank—has a much-deserved reputation for outrageous and low-brow comedy (“Seinfeld on crack,” it’s been called). During a blind date with a beautiful woman, a nervous, sweat-drenched Charlie lies about his job by telling her he’s a philanthropist, but mispronounces it as “full-on rapist.” When Dennis visits his old frat house, the brothers are torturing a pledge with a stun gun to the genitals. You know, stuff like that. But the copious layers of crude humor mask one of the show’s less appreciated virtues: Oftentimes, it gets damn political—and on a wide range of issues, from foreign policy to welfare.

For instance, in this season’s second episode (airing Wednesday at 10 p.m. ET/PT), the pub-operating Gang tackles the ongoing gun debate in America. The episode, titled “Gun Fever Too: Still Hot,” begins with Frank being interviewed on a Philadelphia morning news broadcast about his use of two handguns to ward off a would-be mugging. He’s brought on as a local hero, but it quickly becomes apparent that he’s just another madman with loaded weapons. Frank (being Frank) starts eating a sandwich on live TV and waving his “pieces” at the newsroom. He recounts how after three “punks” approached him, he took out his concealed firearms and shot off multiple rounds, but missed all of them because he has lousy vision. He then chased after them, trying to shoot them in the back. When the anchors ask if he was concerned about possibly killing bystanders in his hail of gunfire, Frank couldn’t care less.

The rest of the episode expands on the Gang’s moronic arguments for and against flooding American society with firearms. This includes Frank instigating a large rally for armed protesters, and Charlie and Mac volunteering to protect a local school while armed with a revolver and a ridiculous-looking sword. The isn’t the first time the show has tackled the issue; Always Sunny previously examined guns in America in the season-one episode “Gun Fever,” which aired in September 2005.

“Always Sunny is the best sitcom of all time because it had the most brilliant rape joke,” Emily Nussbaum declared.

Commentary on gun rights and gun safety is merely the tip of Always Sunny‘s politically satirical iceberg. Ever since the series debuted eight years ago, it has tackled big issues in deceptively low-brow fashion. The show’s commitment to portraying humorous, unholy idiocy affords the cast and crew cover from accusations of preachiness, while allowing them to mine big issues and national debates for stories. Just as the creators are more musically gifted than you might expect, the show is much smarter than it lets on.

“Always Sunny is the best sitcom of all time because it had the most brilliant rape joke,” The New Yorker‘s Emily Nussbaum tweeted last March. “Seriously,” she added. I’m inclined to agree that Always Sunny pulled off television’s finest lampooning of rape culture. Below is video of the joke Nussbaum tweeted about, from the 2010 episode “The Gang Buys a Boat.” The scene has become known as “The Implication,” where Dennis and Mac engage in an awkward conversation about consent—or lack thereof:

Always Sunny also has plenty to say about the ups and downs of the US and global economy. One particularly astute viewer posted a compilation video to YouTube titled, “It’s Always Sunny in the US Economy,” which shows the Gang exploring the basics of economic theory. This includes clips of them brainstorming ideas for printing their own currency and creating a stimulated “self-sustaining” economy (like Dave & Busters, or so they believe), and how to “solve the gas crisis”:

The rich, goofy political history of Always Sunny offers solutions—albeit mostly unsustainable ones—to virtually all of America’s problems. If you’re a fellow at the American Enterprise Institute looking to secure the US’ muscular standing in the world, the show might have answers for you in “The Gang Solves the North Korea Situation,” or “The Gang Goes Jihad,” or maybe “The Gang Wrestles for the Troops.” If you’re a conservative activist waging a guerilla war on government regulation, Dennis and Mac’s pro-freedom, anti-smoking-ban campaign should provide some inspiration. If you wanted to exploit the mortgage crisis in 2009, the Gang could’ve showed you how to do it. If you want to seduce a pro-life extremist, Mac would tell you to write a fake list of abortion providers you’ve assassinated. And if you want a refresher on everything you need to know about the religious arguments against same-sex marriage, watch this:

The 2006 episode “The Gang Runs for Office” contains the quintessential Always Sunny distillation of our political landscape. “Who am I supposed to vote for—am I supposed to vote for the Democrat who’s going to blast me in the ass, or the Republican who’s blasting my ass?” Dennis asks. “You see, politics is just all one big ass-blast,” Mac responds. “It is a coast-to-coast, nationwide ass-blasting,” Dennis adds.

The same episode also weighs in on someone who everybody is convinced will run for president in 2016. “There are plenty of amazing women politicians…[like] Hillary Rodham Clinton,” Dee insists, attempting to rise above the Gang’s collective cynicism. “Awful,” Frank replies. When Dee presses him on why, Frank simply says: “Hates freedom.”